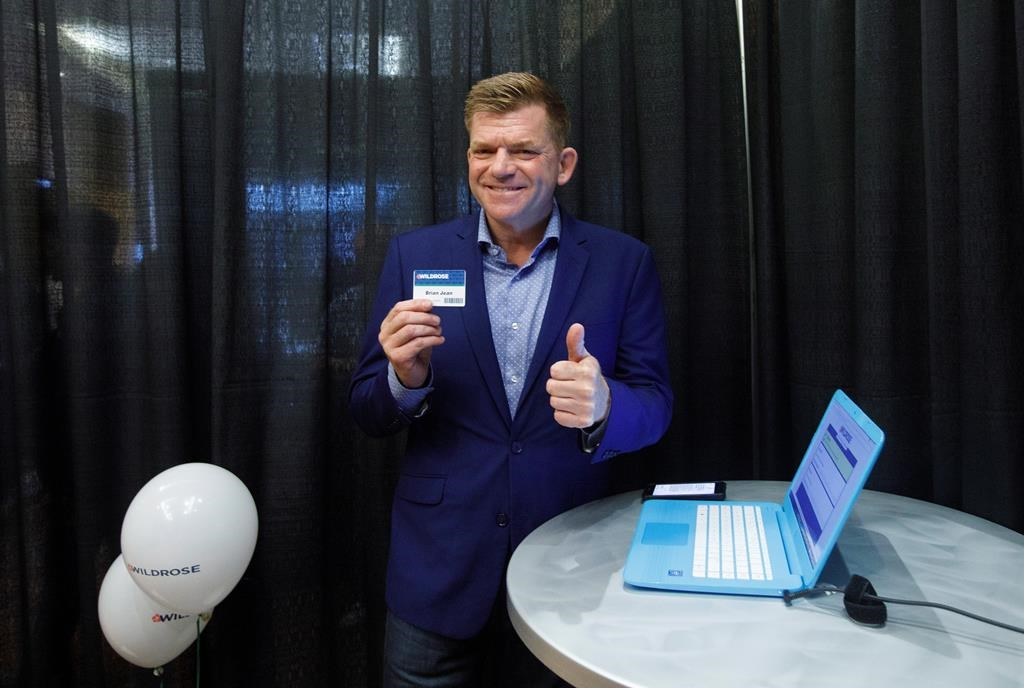 Alberta's two main right-of-centre parties have the mandate to unite after a pair of referendum votes concluded Saturday.

The merging of the Progressive Conservative and Wildrose parties marks the creation of a United Conservative Party, the kick-off of a new leadership race, and a new focus among conservatives in Alberta to defeat Premier Rachel Notley’s NDP government in 2019.

In a victory speech in Red Deer, Alta. Saturday, Wildrose leader Brian Jean said his members had voted “yes to building on everything that we’ve accomplished as Wildrose, and yes to saving Albertans from the NDP government.”

On Twitter, Hoffman, who represents an Edmonton riding in the legislature, said the UCP offers a combination of "entitlement" from the old Progressive Conservatives along with the Wildrose party's "extremism and cuts."

"It all adds up to pain for Alberta families," Hoffman wrote.

#ucp offers combination of #pcaa entitlement plus #wrp extremism & cuts. It all adds up to pain for #Alberta families. #ableg @albertaNDP

A new United Conservative Party could threaten to reverse major policies introduced by the NDP government if it wins the next election. This could include retreating from a climate change plan that introduced a carbon tax in the oil-rich province, which is home to the world's third largest reserves of crude oil after Saudi Arabia and Venezuela.

Wildrose Party members voted 95 per cent in favour of the deal, exceeding the minimum 75 per cent support required.

The Wildrose Party said Saturday nearly 25,000 votes were cast, making for a voter turnout of 57.7 per cent.

The Progressive Conservatives just needed a majority of votes to merge. Their voter turnout was 55 per cent, with more than 27,000 votes cast, and 95 per cent of them endorsing the merger.

"Tens of thousands of PC and Wildrose members today have decided to put our province ahead of any political party. And the reason I believe they have done so is because many of our fellow Albertans are going through a time of adversity," Progressive Conservative leader Jason Kenney said in his own victory speech later on Saturday.

End of PC in Alberta

The parties' merger spells the dissolution of Alberta's Progressive Conservatives, who were in power for nearly 44 years, under the reigns of seven different premiers including political powerhouses such as Peter Lougheed and Ralph Klein.

Serious discussions about bringing the two conservative parties together began last year, when former Stephen Harper cabinet minister Jason Kenney announced his bid to lead the Progressive Conservatives, who were soundly defeated in the 2015 election by Premier Rachel Notley’s NDP.

"Voters sent us a message in 2015, and today Progressive Conservatives responded with a message of humility, maturity, and democratic respect," Kenney said. "This is about uniting Albertans of all backgrounds, and all walks of life. If you feel disappointed by recent PC governments, we hear you. ... join us."

Former Progressive Conservative Association executive director Troy Wason, who left his position in the spring, said he wasn’t surprised at the weekend’s results.

“The difficulty now is deciding what does this Alberta conservatism look like in this party,” he said. “The talk is to go back to an Alberta Advantage,” Wason said, referring to an oft-repeated Klein-era slogan. “I’m not sure if we ever defined that … low taxes, supporting business, and then you’ve got this social conservativism that I think right now is going to be the one that people are most concerned about.”

Wason has been a member of the party since 1984, and said he doesn’t expect the new party will pick up Lougheed’s progressive-conservative legacy.

“I’m sad for the legacy,” Wason said. “It’s a 112-year-old party and it went down without even a wimper today.”

The results of the Progressive Conservative vote were announced later than expected on Saturday evening, as people who were still queued to vote after the polls were supposed to have closed were allowed to continue voting. Multiple complaints about the Progressive Conservative Association of Alberta's referendum process were aired on social media leading up to the final decision.

Calgary MP Michelle Rempel posted a flurry of messages and gifs on Twitter, writing immediately after the Wildrose results, “we are on track for unity and a brighter future for (Alberta)!!!!! YASSS!”

With a whopping 95% approval vote, we are on track for unity and a brighter future for AB!!!!! YASSS! #wrp #ableg

Edmonton Conservative MP Kerry Diotte told National Observer he voted in favour of unity in both parties’ referendums, and argued beating the NDP is “the bulk” of the reason for the merger.

“It’s a dark day for the NDP, I think, in Alberta today. I think they should be afraid, they should be very afraid,” Diotte said, describing most Albertans as “inherently small-C conservatives” who want to see balanced budgets.

“I think that this merger will, with work, ensure that the NDP is a one-term government.”

Alberta is expected to run a deficit this year of over $10 billion, with more deficit budgets in the years to come. But the province’s cumulative debt has been on the rise since before the NDP came into power, thanks in part to lower oil revenues.

High government debts translate to high debt servicing costs, which in turn also have to be factored into government budgets.

Wildrose members, including sitting MLAs, took to social media with considerable glee as the results were reported in Red Deer, Alta.

Congratulations to you and your entire team, Brian! Let's get this party started! https://t.co/2mhgAtD86f

One of the prospective leadership candidates for the new party, Derek Fildebrandt, dubbed the vote the founding-point for the United Conservative Party.

Today we made history. 95% in favour! Today, we founded the United Conservative Party of Alberta. #cdnpoli #ableg pic.twitter.com/v5hkFVn5cg

With a whopping 95% approval vote, we are on track for unity and a brighter future for AB!!!!! YASSS! #wrp #ableg

-- With files from the Canadian Press

Editor's note: This article was updated at 9:25 p.m. on Saturday with additional results from the PC party and quotes.