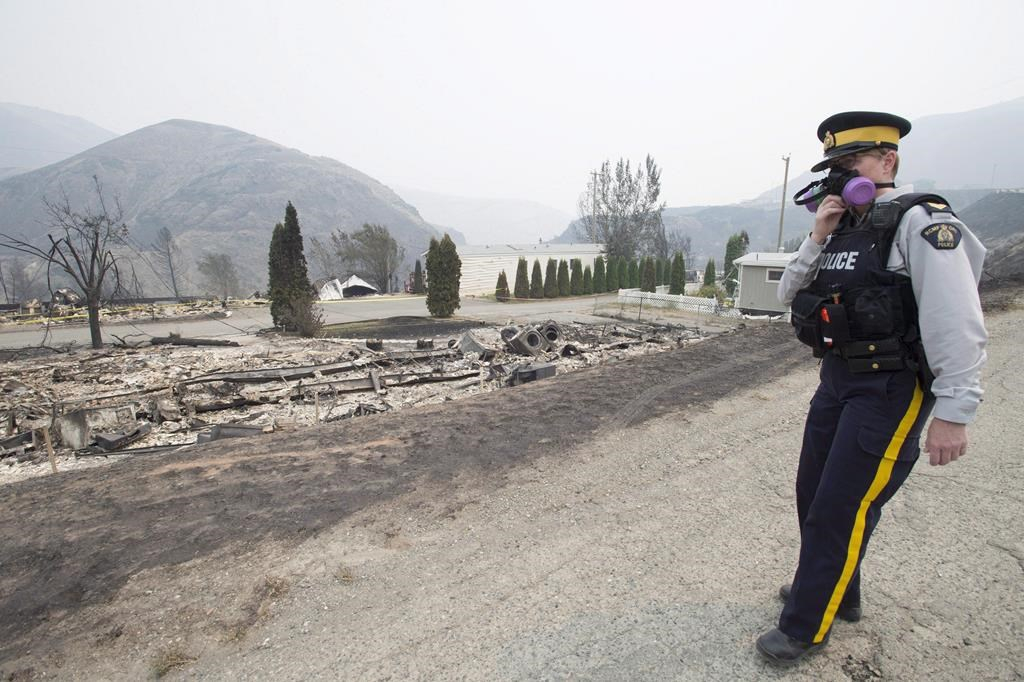 The area of Boston Flats, B.C. is pictured Tuesday, July 11, 2017 after a wildfire ripped through the area earlier in the week. File photo by The Canadian Press/Jonathan Hayward
Previous story
Next story

Officials in one of the regions hardest-hit by British Columbia's wildfires provided a grim update Wednesday on the number homes lost, and say the tally is expected to grow.

The Cariboo Regional District said 41 homes have been destroyed and more than 35,000 residents on about 13,000 parcels of land are under either evacuation orders or alerts.

Another eight homes were confirmed lost in the Central Okanagan region last weekend and almost three dozen trailers were destroyed when fire raced through the Boston Flats trailer park next to Cache Creek, B.C., when the fires first flared up in early July.

The number of homes destroyed in the Interior could still grow, said Cariboo Regional District Chairman Al Richmond, noting there are still several areas officials haven't been able to access because of fire activity.

"I believe it is probably quite likely that the number will still go up, but we can only limit it to the roads we've been able to do so far," he said.

The news comes on the same day that Premier John Horgan announced that the province would be extending the state of emergency for another two weeks over the unprecedented fire situation in the province.

The current state of emergency expires Friday and Horgan said he regrets having to lengthen it.

"This is unprecedented," he said. "Traditionally, when an emergency is declared, people are usually back in their homes within the two-week period. That may not be the case for many individuals."

The new premier said people who are kept out of their homes for more than 14 days will get a second payment of $600, which will be paid out of a previously announced $100-million fund administered by the Canadian Red Cross.

The BC Wildfire Service said 140 fires were burning across the province Wednesday morning, including 15 that threatened communities.

Residents of Cache Creek, which has a population of about 1,000, returned home Tuesday following a lengthy evacuation.

But an estimated 45,000 others across the province are still displaced by the flames, including about 10,000 residents of Williams Lake, B.C., who were forced from their homes over the weekend.

Mounties in Williams Lake said Wednesday that one man was arrested and firearms were seized after a resident threatened to kill a firefighter if he continued to conduct back burning. The resident was with a group of men, one of whom was wearing a handgun on his hip, police said.

RCMP said they're not considering a recommendation of charges against the 44-year-old man who made the threat, as he acknowledged his statements were made in a "time of extreme stress," but the 57-year-old man accused of wearing the handgun was arrested. Guns were seized from both men.

"We know and we can appreciate that these wildfires have been stressful on everyone involved, but we have to continue working together to fight them," Staff Sgt. Annie Linteau said.

"Certainly, that includes respecting the firefighters who are out doing their jobs so that everyone has a home to come back to."

Fire information officer Navi Saini said one person was injured in a crash while driving in an evacuated area west of Williams Lake. The person had been in the area in an attempt to fight the fire on their own, she said.

Re-entry plans for 100 Mile House and Williams Lake are in the works, but officials with the Cariboo Regional District said Wednesday that residents will have to wait a little longer before they can go home.

"We're doing what we can to make sure that when we can return people, we're as safe as can be," said Walt Cobb, mayor of Williams Lake.