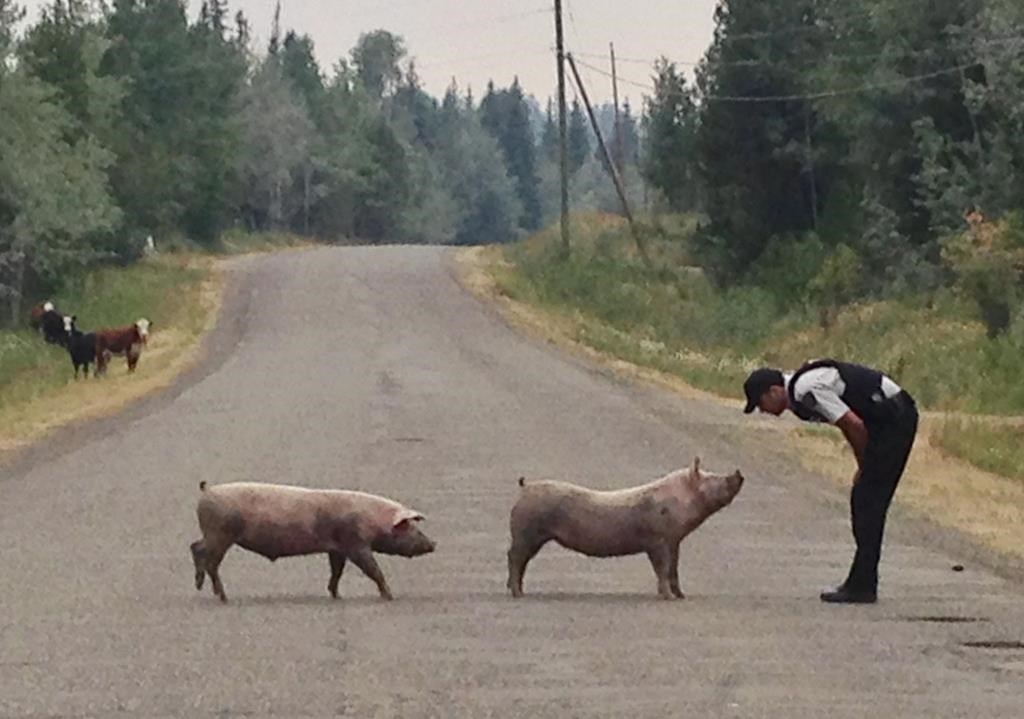 A RCMP police officer is shown with two pigs in this recent handout photo. Handout photo by the B.C. RCMP
Previous story
Next story

Thousands of people have been displaced by wildfires in British Columbia, but the flames have also forced livestock left behind to flee beyond their enclosures.

RCMP Cpl. Janelle Shoihet says officers are patrolling communities and helping to guide livestock back to where they belong whenever possible.

She says officers have also been in contact with the B.C. SPCA to get animals more adequate support.

In a few cases where the SPCA wasn't available immediately, Shoihet says officers have fed their lunches to animals to ensure they weren't hungry.

The SPCA, which has been deemed an essential service by the province amid raging wildfires, says animals are being located, fed, given water and reunited with their owners when possible.

Animals will also be taken into the temporary care of the SPCA if they determined to be in danger due to fires or health issues.

The SPCA says officers have rescued dogs, cats, horses, pigs, llamas, mules, a cockatiel and even a red tail python from fire-affected areas.

Senior animal protection officer Kent Kokoska says the python, named Medusa, was reunited with its owner, who was very happy to see their pet again.

The ministries of Forests, Environment and Agriculture say motorists should be on the lookout for animals wandering around roadways because wildfires have damaged fencing, allowing animals to escape from their enclosures.

The ministries say any emergency situations involving wildlife should be reported to the Conservation Officer Service.

One could say there are three

One could say there are three pigs in the photo.