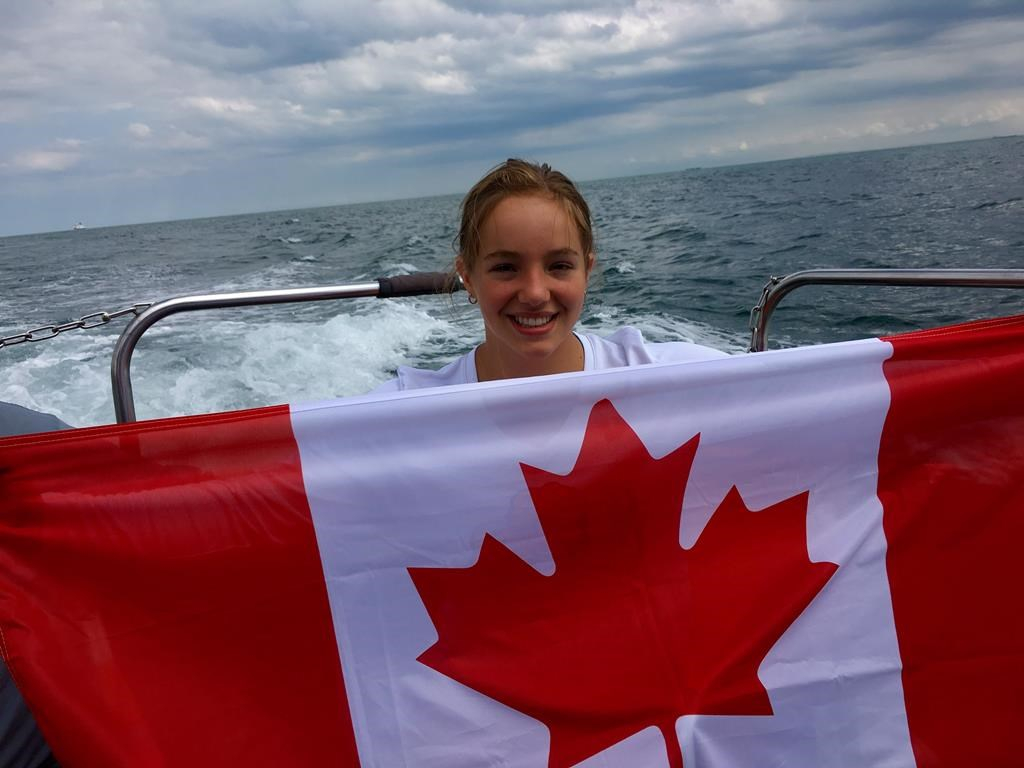 Emily Epp is seen in an undated handout photo holding a Canadian flag on board a boat on the English Channel. Handout photo by The Epp Family
Previous story
Next story

While many teens spend their summers relaxing, a 17-year-old from Kelowna, B.C., has been pushing her body and mind to the limits and raising thousands of dollars for charity in the process.

Emily Epp swam across the English Channel earlier this month in a gruelling trek that took nearly 12 hours to complete.

She said her family and coaches on the pilot boat tried everything they could to get some fuel into the young swimmer's body.

"For about an hour, all I ate was ginger ale and a few M&Ms!" Epp said in an email after the swim. "But I was able to shake it off and continue swimming, and I'm very thankful for that."

The Channel Swimming Association says on its website that the English Channel is "considered by many to be the ultimate long distance challenge," because the approximately 32 kilometre stretch hosts a variety of difficult conditions, including cold waters, high waves and occasional debris such as seaweed and wood planks.

Epp found that the waters are also home to a variety of sea creatures, including jellyfish that stung her several times during her swim.

But the teen persevered and as she approached France, Epp saw something colourful in the sky.

"We could see fireworks all along the coast for Bastille Day celebrations," she said. "My boat pilot teased me that he had set it up just for me!"

Epp said swimming across the English Channel took nearly three years of training, including cold-water and endurance swims in Kelowna's Okangan Lake. She also mentally prepared through visualization and talking to a number of people who previously swam the English Channel.

"I was very fortunate to have some incredible mentors help me," Epp said.

In June, she put her training to the test, swimming about 30 kilometres around Bowen Island off the coast of Vancouver in just under 11 hours.

"Her dad and I are super proud," Emily's mom, Cheryl Epp, said after the Bowen Island swim. "She blows us away with how determined she is and how hard she's been working."

Epp has been working hard on dry land, too, using her epic swim to fundraise for a children's hospice that has provided crucial care for her family.

"When I found out that most (English) Channel swimmers choose something to fundraise for, I immediately knew I would try to raise money for Canuck Place," Epp said.

The family started receiving care there about five years ago for Emily's sister, Elan, who lost all of her motor control following a viral infection when she was 18 months old.

"It was fun for me and my (youngest) sister, Erin, to be with other siblings of children who had life-limiting conditions," Emily Epp said. "Being in a place where my parents could have some help learning different ways to make Elan feel better that wasn't in a hospital setting, was something we had never experienced before."

The teen's original goal was to raise $4,000 for Canuck Place. She has now brought in more than $44,000, and those funds will be matched by a Vancouver-based foundation.