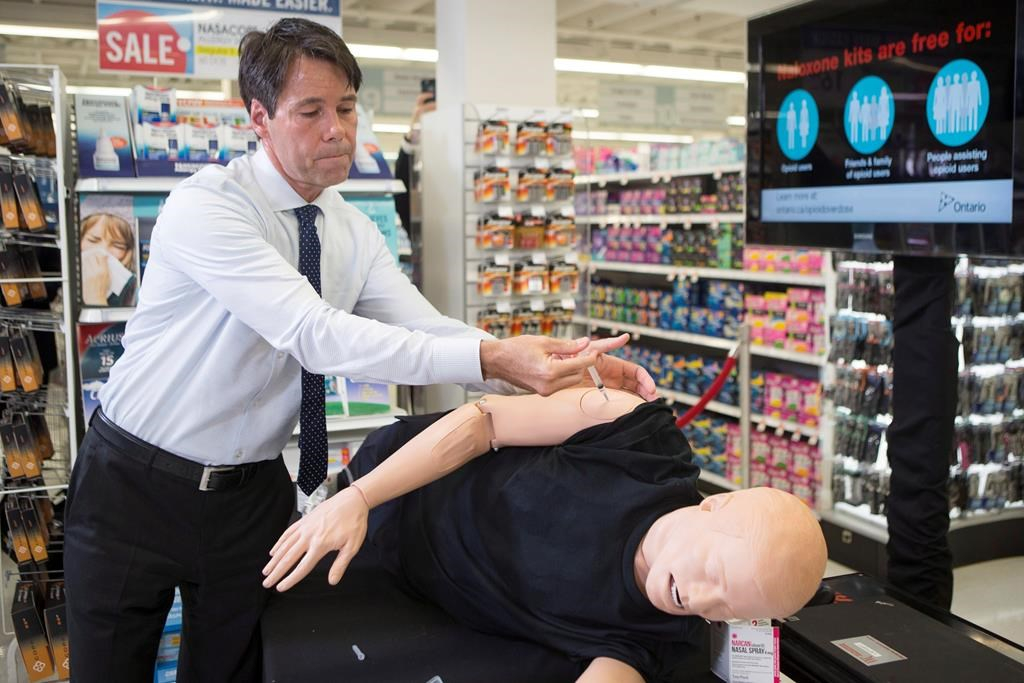 Ontario Health Minister Dr. Eric Hoskins demonstrates how to inject naxolone, taken from an emergency kit, at a pharmacy in Toronto on Tuesday April 11 , 2017. File photo by The Canadian Press
Previous story
Next story

The mental health workers will be going to the reserve, located near the Ontario and Manitoba border, immediately at a cost of about $1.6 million dollars, Hoskins said.

"This can't be an issue of jurisdiction," Hoskins said in an interview with The Canadian Press.

"We heard directly from the chief ... as well as others that the situation on the ground in Pikangikum, just how grave it is and the need for trauma counselling as well as broader mental health supports for children and youth at risk."

There are eight mental health workers on the ground at the moment jointly funded by the province and the federal government, he said.

Pikangikum has had a long-standing battle with suicide; at least four young people have taken their lives in the remote community recently.

Ontario is also announcing what it calls a new Indigenous youth and community wellness secretariat designed to co-ordinate and speed up government efforts while it also works with Indigenous partners and Ottawa, Hoskins said.

"It will become, essentially, a one-stop shop for ... our Indigenous partners if a response is required or if there is a circumstance that requires an urgent response," he said.

"We expect next week it will start ... It will be a full-time secretariat to almost fast-track key files whether it is in health or education."

The group signed a charter of principles aiming to transform the health care system for First Nations.

Philpott and Hoskins have both agreed profound change will be required to end the suicide crisis — although Indigenous health experts want to see concrete commitments out of Monday's meeting, including more control at the level of First Nations.

Dr. Michael Kirlew, a physician based in Sioux Lookout, Ont., believes the Indigenous youth suicide crisis in northern Ontario and elsewhere will not be addressed unless there is a fundamental rethink of the way care is delivered on reserves.

"The health-care system ... First Nations people receive is not equal," he said, noting Canada has grown accustomed to witnessing this injustice.

"It is inferior .... It is not equitable. The children, whether they are in Pikangikum, Summer Beaver, Wapekeka, they do not have access to mental health services they need, period."

Indigenous health has been focused on measuring the number of dollars spent as opposed to health outcomes, added Dr. Alika Lafontaine, the past president of the Indigenous Physicians Association of Canada.

That needs to change, he said.

"When you're talking about health transformation, what you're really looking at is changing the intent of the system to achieve a different outcome," he said.

"In Indigenous health, what you're trying to do is create an outcome that's different than our colonial outcome which was extinguishing the rights of Indigenous people through land and resources."

Bob Nault, a Liberal MP who represents an Ontario riding that encompasses reserves including Pikangikum, agrees the health care system as it stands now is not capable of producing sustainable, long-term results.

He said he has been witnessing the same problem for the past 30 years, including as a former Indigenous affairs minister under former prime minister Jean Chretien.

"Communities know what is going to work for them," he said. "Why can't we help support those plans?"

Monday's charter signing is supposed to lead to a transition where First Nations can develop and implement their own health plans and avoid getting caught in government red tape.

The charter comes with a tracking mechanism that is meant to monitor results. And it will eventually include a more comprehensive strategy to prevent suicide and mental health crises to begin with.

"There are many steps to get there but we have agreed today that ... is our goal and the charter that we just signed established the principles upon which that work will be done," Philpott said at a news conference held in Ottawa.

The agreement can also be seen as an acknowledgment by all parties that the "colonial health system" established for First Nations across Canada does not serve communities well, Hoskins said, noting poor outcomes and inequities.

For their part, First Nations communities are ready to take over control, Fiddler said.

"The document we signed ... outlines the principles that will help ... guide us to where we want to go," he said. "It is time that this happens especially ... what we've been through over the last year."

Several remote communities, including the Wapekeka and Pikangikum first nations, have been reeling following the suicides of a number of young people recently.

Transforming the Indigenous health care system has been a long-term goal for many a First Nation organization fed up with frequent emergencies.

In October 2016, NAN, the Manitoba Keewatinowi Okimakanak (MKO) — an organization representing communities in northern Manitoba — and the Saskatchewan-based Federation of Sovereign Indigenous Nations proposed a joint plan for changing care across their territories to Philpott and Indigenous Affairs Minister Carolyn Bennett.

Doctors are pushing for similar changes.

"While government bureaucracies maintain funding and health system design, First Nations are left with the blame for health system failure," the letter said.

"They are also left with the results of health system failure: more suicides, more disease morbidity and more broken families and communities."

Part of the overhaul required involves giving more resources and responsibilities to First Nations themselves, the doctors argue, because the bureaucracy does not have the proper tools to implement prevention and treatment plans.

"Short-term crisis response intervention cannot be the backbone of any health system," their letter said.

"This is what we have accepted in the current government health system design ... we ask that you invest in community-led health transformation."

In 2013, the First Nations Health Authority in that province assumed programs, services, and responsibilities formerly handled by Health Canada's First Nations Inuit Health Branch — an approach considered the first of its kind in Canada.