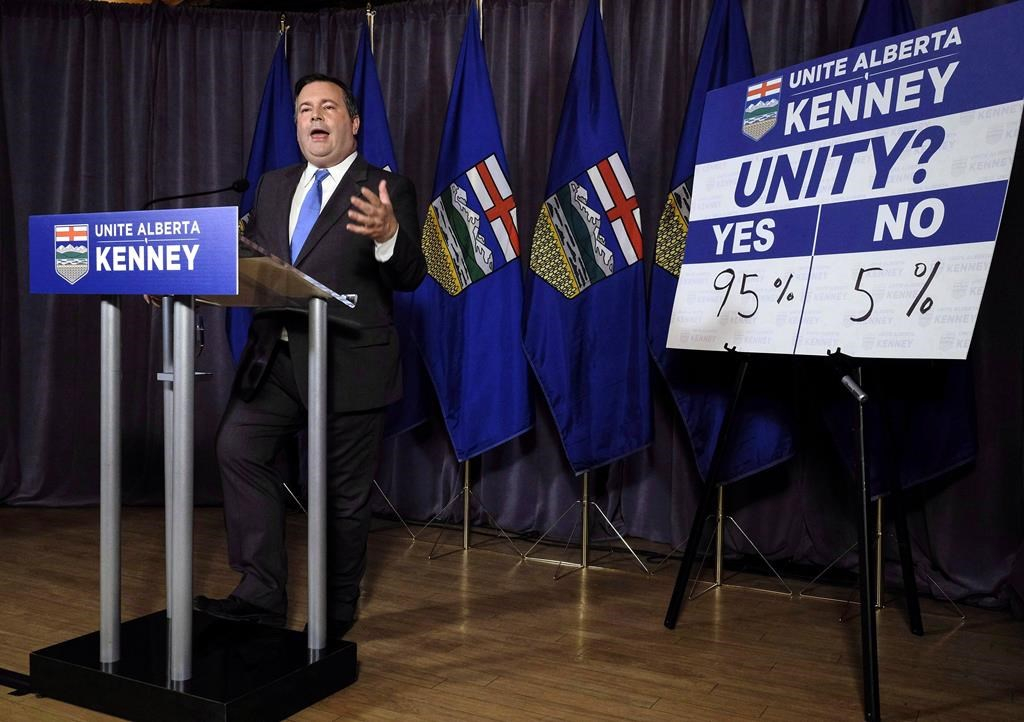 Alberta PC Party leader Jason Kenney announces the results of the referendum on unity in Calgary, Alta., on Saturday, July 22, 2017. Photo by The Canadian Press/Jeff McIntosh
Previous story
Next story

The former president of Alberta's Progressive Conservatives says some members feel adrift after a majority voted to embrace a new party, effectively consigning one of Canada's great political brands to the ash heap of history.

Katherine O'Neill, in an interview Sunday, said she's been hearing from many PC volunteers and members who now feel "politically homeless" in a party they feel is tacking too far right on social issues.

"There's a lot of grieving going on today," said O'Neill.

"(These) people have literally put their blood, sweat and tears into the Progressive Conservative party and I know a lot of these people and they're heartbroken.

"There are a lot of memories, a lot of hard work. And now they're not really sure where they could go and best use their efforts."

O'Neill headed up the PCs during the recent leadership race that saw former federal Conservative cabinet minister Jason Kenney elected on a platform to merge with the Wildrose, Alberta's official Opposition.

That plan came to fruition Saturday night when members of both parties, in separate votes, chose overwhelmingly to join forces as the new United Conservative Party.

The Wildrose and the PC names will live on legally, but are effectively husks with no candidates.

O'Neill and other members left soon after Kenney's leadership victory in the spring.

O'Neill said she is fiscally conservative but socially progressive. She's now heading up a political action committee called Alberta Together that is looking to back a party with similar values.

Many at the Alberta Together meetings have been embracing the centrist Alberta Party.

Dave Quest, a former PC legislature member, said he was cutting up his PC party membership card after three decades.

"I don't believe the UCP will be the party that I joined as a Progressive Conservative," said Quest in an interview.

Quest said that under former PC premier Ed Stelmach the government had to fast track infrastructure construction that had been allowed to lag when the PCs, under Ralph Klein in the 1990s, focused exclusively on debt reduction and budget cuts.

"Should (the UCP) form government, it will be a 1990s fiscally driven agenda and it won't be what's best for the province," said Quest.

The Progressive Conservatives won power in 1971 and governed Alberta for almost 44 years before being defeated by Premier Rachel Notley and her NDP in 2015. The Wildrose lasted a decade.

Kenney has stressed vote splitting by the Wildrose and the PCs led to the NDP win and that only a coalition can prevent a repeat in the 2019 election.

Other PCs, including most of the eight-person caucus, have embraced the Wildrose merger, and the race for a leader for the new UCP has begun. That vote goes on Oct. 28.

Schweitzer has been campaigning for weeks, anticipating a positive vote on the referendum. His campaign focuses on fiscal conservatism but social progressivism.

He said the die has not been cast on what the UCP will look like.

"Those (Progressive Conservative) values can still be in this new United Conservative Party and I think that they are," said Schweitzer.

"I think we've got a great legacy (on both parties) and together we're going to have more even than we've had as two separates," said Jean.

Alberta Party Leader Greg Clark said his party has offered alternatives on a range of issues from climate change to debt reduction, but said Albertans still don't know what the UCP stands for.

"It's a group that seems united in opposition to the NDP but have offered not a single positive policy that tells Albertans how they're going to handle the challenges facing our province," said Clark.