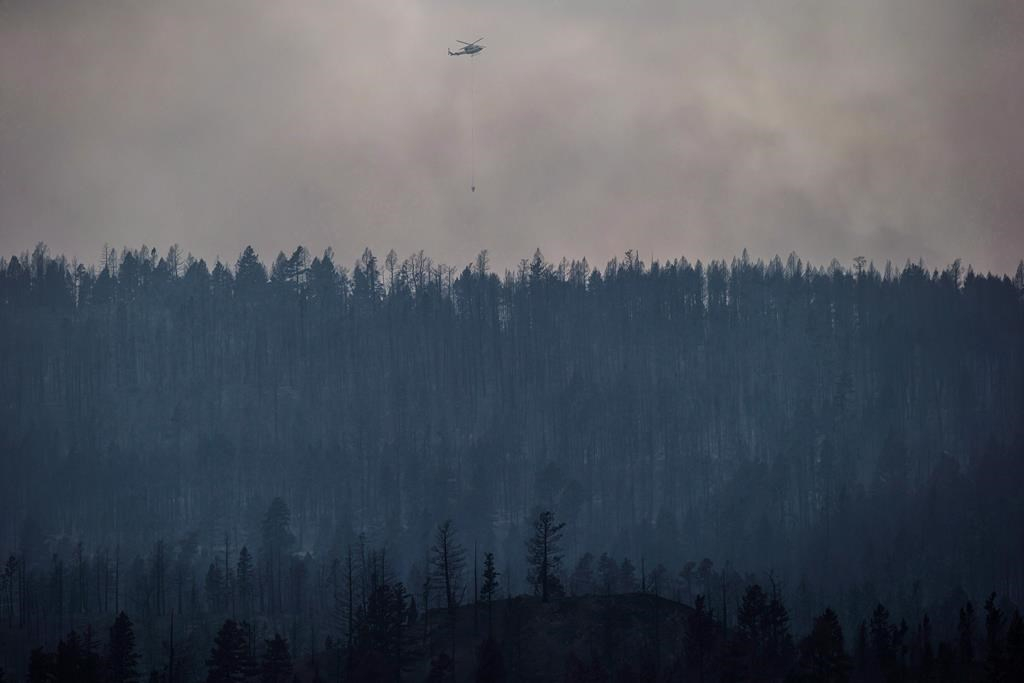 A helicopter is used to battle a wildfire burning on the top of a mountain near Ashcroft, B.C., on Monday, July 10, 2017. File photo by The Canadian Press/Darryl Dyck
Previous story
Next story

Residents of two communities evacuated due to wildfires in British Columbia have been allowed to return, but officials say it's unclear when thousands of others will be allowed to go home.

Evacuation orders for 100 Mile House and Princeton were downgraded to alerts on Saturday, allowing residents to go home, although with the knowledge that they may have to leave again on a moment's notice.

People returning to the Interior communities have been picking up cleanup kits and advice from the Red Cross as they return home, Al Richmond, chairman of the Cariboo Regional District, told a conference call Sunday.

"I think it's been a happy time for most people there, even those who had some loses. They're glad to be back," Richmond said.

More than 30,000 people remained displaced by wildfires on Sunday as a cold front moved across central and southern B.C., bringing with it gusting winds that threatened to stir up flames.

The weather is making it difficult to predict when other evacuees, including about 10,000 people from Williams Lake, may be able to return home, said fire information officer Navi Saini.

"It really depends on fire activity," she said. "Although we are making progress on the fires, it is a pretty fluid situation right now, and with the forecast wind, it's something we'll continue to monitor and there'll be discussions had later."

Residents of Williams Lake were forced out more than a week ago when flames threatened to cut off highways that could provide future escapes.

Geoff Payton with the City of Williams Lake says officials are working on plans for re-entry, but there's no set date for when people will be able to return.

A wildfire continues to burn about seven kilometres outside of the city, Payton said.

"It wouldn't take much more than a strong wind event to blow it into town," he said.

The province allowed people back onto lakes in the Cariboo region surrounding Williams Lake on Sunday, but warned that firefighting aircraft might need to access the water.

More than 4,000 people were fighting 150 wildfires burning across the province Sunday afternoon, including one near Mount Assiniboine Provincial Park, near the B.C.-Alberta boundary.

The fire caused the BC Wildfire Service to close the park as a "proactive measure" because it is accessible only by hiking trails and would be difficult to evacuate if needed.

Public Safety Minister Ralph Goodale visited Kamloops on Saturday to announce the federal government will be adding to funds managed by the Canadian Red Cross to help the 44,000 people displaced due to the crisis.

He said the province is only in the beginning of the fire season and has already been facing a very dangerous and difficult situation.

Federal officials to give an update on B.C. wildfire ahead of concerning weather