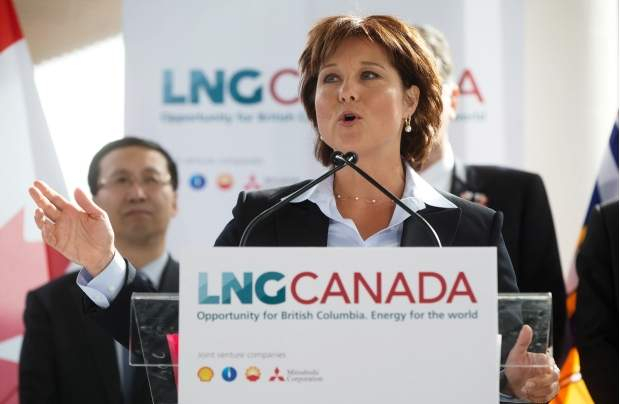 The dream of a booming liquefied natural gas industry in British Columbia appears to be fading, at least for the foreseeable future, after Petronas and its partners scrapped a $36-billion megaproject in the province, experts say.

A consortium led by Malaysia-owned Petronas announced Tuesday it would not proceed with the Pacific NorthWest LNG project near Port Edward, B.C., due to an "extremely challenging environment" brought on by prolonged low prices.

The project would have included a natural gas export terminal on Lelu Island on the province's northern coast and a 900-kilometre pipeline to bring the natural gas in from northeastern B.C.

The proponents of two other major projects, Shell-backed LNG Canada and Chevron's Kitimat LNG, say they are proceeding toward final investment decisions, but analysts predict the facilities are unlikely to be built in the next three to five years — if at all.

"I'd say it's a pretty low possibility. It's not quite zero, but the Shell LNG project is also a very big, expensive greenfield project," said Martin King, vice-president of institutional research at GMP First Energy.

Shell, along with PetroChina, KOGAS and Mitsibushi, have formed a joint venture company called LNG Canada that has proposed an export terminal in Kitimat on B.C.'s north coast. It indefinitely delayed making a final investment decision in July 2016.

LNG Canada said in a statement that it "continues to progress key activities" toward a future final investment decision, including ongoing negotiations with a construction contractor, completing permits and consulting with First Nations and community members.

B.C.'s other major proposal, Kitimat LNG, is backed by Chevron and Woodside Energy International. The companies are committed to delivering a globally competitive project that is ready at the right time, said spokesman Ray Lord.

"Current oil and gas market conditions remain challenged as an excess in LNG market supply is expected to continue," he said in an email. "However, a significant opportunity exists for competitive projects to supply LNG to Asia sometime in the middle of the next decade."

But in response to prevailing market conditions, Chevron and Woodside have reduced capital spending on planning, engineering and early site preparation work, he said.

Former B.C. Liberal premier Christy Clark made LNG a cornerstone of her successful election campaign in 2013 with promises of 100,000 jobs and $100-billion in revenue over decades. Her aim was to have three LNG facilities operating by 2020.

Woodfibre LNG, a $1.6-billion plant near Squamish, is the only project in B.C. to reach a positive final investment decision. Site preparation is underway and construction is expected to begin next year, said spokeswoman Jennifer Siddon.

She noted the project is smaller than other proposals and it is on a brownfield site with a deep water port, hydroelectric access and a gas pipeline that needs to be expanded.

"Is it challenging? Yes, it's definitely challenging, but we are moving forward with our project," she said.

An NDP government was sworn in last week. Clark's Liberals have blamed the cancellation of Pacific NorthWest LNG on the New Democrats, given the NDP's past reluctance to support the project.

Petronas denied the change in government played a role, and Michelle Mungall, the new energy minister, said it was very clear from her meeting with the company that the decision was about global market pricing.

Mungall said she has spoken with the proponents of LNG Canada and Kitimat LNG, as well as First Nations, and assured them the new government is going to work with them "on a road map to success."

She also spoke with Natural Resources Minister Jim Carr on Wednesday about ways to make Canada and B.C. more competitive, although she would not say what measures were on the table.

"I think B.C. is in a very strong place to see this industry succeed," she said.

James Tansey, a professor at the University of British Columbia's Sauder School of Business, said he doesn't think the Petronas decision is a death knell for the industry but it's unlikely any major facilities will be built in the next three to five years.

"I think it'll send ripples through the sector and it'll send a strong signal to the B.C. government."

— With files from Dirk Meissner and Ian Bickis

Why is BC still encouraging

Why is BC still encouraging LNG when we know that emissions need to be reduced in order to achieve the below2degrees? Where are lots of options to stimulate economic growth with clean energy, clean tech. Now is the time to back off any encouragement to LNG/natural gas. Latest indications are that economic growth in BC looks pretty good. Build on that.

Why is BC still encouraging

Why is BC still encouraging LNG when we know that emissions need to be reduced in order to achieve the below2degrees? Where are lots of options to stimulate economic growth with clean energy, clean tech. Now is the time to back off any encouragement to LNG/natural gas. Latest indications are that economic growth in BC looks pretty good. Build on that.