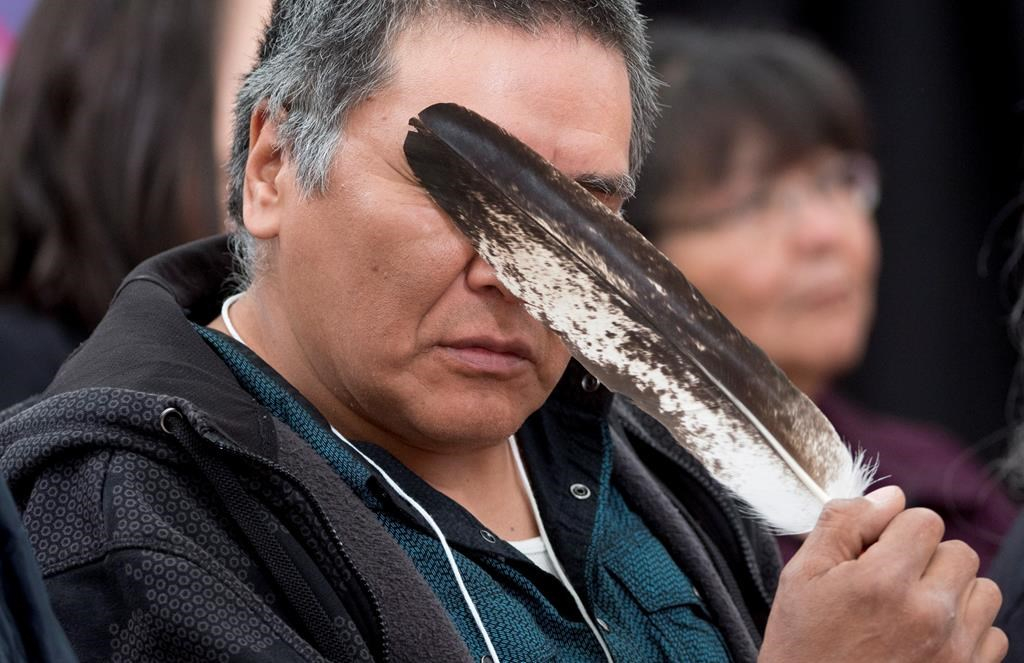 Frances Neumann wipes a tear away as she tells a story about her murdered sister-in-law Mary Johns at the National Inquiry into Missing and Murdered Indigenous Women and Girls taking place in Whitehorse on May 30, 2017. File Photo by The Canadian Pres
Previous story

The families of missing and murdered Indigenous women say a national inquiry has already failed and are calling for "a hard reset" on the process.

Many made emotional pleas Wednesday as two of the inquiry commissioners appeared at the Assembly of First Nations annual meeting to explain the inquiry process, including how to register and give testimony.

One of commissioners admitted the inquiry has been in "crisis mode" for several weeks, but said she doesn't believe it's failing women.

Gerri Pangman, whose sister and aunt were killed in separate incidents decades apart, said the inquiry is a failure because it doesn't hold police to account.

"For this national inquiry, in the terms of reference, to leave out the police, it's a failure and it's a dishonour to my sister," Pangman said at the meeting.

The remains of Pangman's sister, Jennifer McPherson, were found scattered on a remote island off the coast of Vancouver Island and her husband was convicted of murder in 2014.

Her husband, Traigo Andretti, subsequently pleaded guilty to second-degree murder in the death of a Manitoba woman, Myrna Letandre, who disappeared in 2006. Letandre's dismembered remains were found in 2013 in a Winnipeg rooming house.

"So it took the death of my sister for Myrna's family to get justice, when it could have been in 2006 and my sister would be here," said Pangman. "And you can just say this inquiry is going to be a success? No, it failed my sister."

Another woman, Hilda Anderson-Pyrz, said the inquiry has failed because families don't believe in the process and the process doesn't feel safe enough for people to share stories.

"I'm sorry, but standing here, I have a really difficult time with you two sharing this process like everything is good. It's not good," she said.

Anderson-Pyrz, who is also co-chair of a Manitoba coalition for families of missing and murdered indigenous women, said she supports a national inquiry, but not the current process which she called fractured, given that one commissioner and five staff members have already resigned.

But not everyone wanted a complete overhaul. Others, like Christine Simard-Chicago, suggested the commissioners' hands were bound by the government's rules and that needs to change. Among other things, the timeline needs to be extended, she said.

"To have an inquiry of this magnitude, to be able to get off the ground takes time ... and mistakes are going to be made," said Simard-Chicago, who lost a cousin in 2011 and also works with the National Family Advisory Circle. "But if we work together as families come up with solutions and help them move along in their jobs, maybe we can come up with some good concrete recommendations."

AFN Chief Perry Bellegarde said there are concerns, but expressed support for the inquiry.

"They have a difficult job, difficult decisions to make and we have to really come together as leaders... with all of our chiefs, working together, and the families, to support them and listen to them," he said late Wednesday evening after more than three hours of comments. "They didn't have to come here, but they came. They came to listen."

The two-year, $53.8 million study is designed to examine the root causes of violence against Indigenous women and girls.

At the start of the meeting, commissioner Michele Audette told those gathered that there was a lack of communication at the beginning of the inquiry process, in part because the commissioners were told not to speak or go to events. But she said they "were too silent," which was a mistake.

"I don't think right now we are failing. We are trying. We're not perfect, I said it, I'll repeat it again."

Audette also told reporters later that the inquiry has "been in crisis mode for quite a few weeks now" and that is affecting all staff. However, she added that the inquiry still has capable commissioners.

The commission has said it is moving ahead with its work, including nine hearings this fall beginning in September in Thunder Bay, Ont.