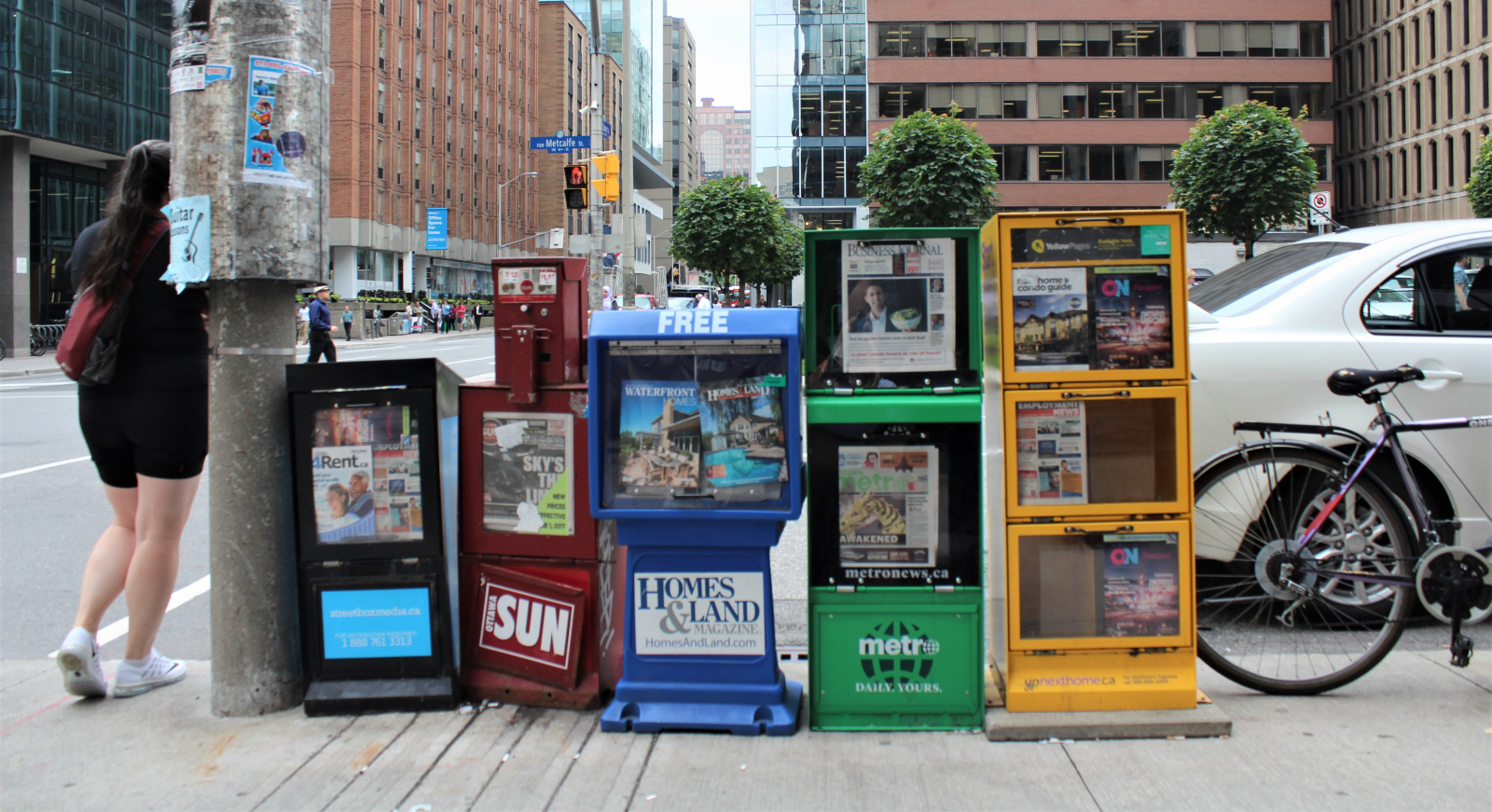 Newspaper boxes at the corner of Metcalfe St. and Slater St. in Ottawa on July 27, 2017. A Vancouver-based environmental organization's rankings of North American printers is good news for many Canadian firms. Photo by Carl Meyer
Previous story
Next story

Six Canadian printers have made the top 10 this year in a Vancouver environmental organization’s sustainability rankings.

On Thursday, Canopy Planet released its annual Blueline Ranking for 2017. Canopy calls its ranking system a “consumer guide” to the sustainability performance of the largest printers in North America.

The ranking pits large printers, as measured by annual sales, against 32 criteria that scrutinize things like the conservation of ancient and endangered forests, protecting endangered species, a preference for environmentally-friendly material sourcing and the publication of measurable goals and timelines.

Toronto-based TPH The Printing House landed the number-two spot in Canopy’s rankings this year, the same spot it held in the 2016 rankings. The number-one spot was claimed by New Jersey’s EarthColor, which also held onto its title from 2016.

Neva Murtha, senior corporate campaigner for Canopy, said no matter where companies sat in the rankings, the list represents just the “tip of the iceberg” for the large North American printing industry.

“I would love to see the entire industry follow the lead of these printers,” she said.

Canopy says its rankings draw from content based on publicly-available information online, so printers that don’t have robust information on their websites could be affected.

“Corporate customers who want to know that their supply chain can help them on sustainability, want to see the transparency."

The lowest Canadian company in the rankings was Marquis Book Printing, which placed 25th out of the 44 companies examined.

Gino Labrie, vice president of finance at Marquis, said his company actually has a policy of using 100 per cent recycled paper. He said he believed the company's ranking was affected because this policy isn't public.

"We at Marquis make great efforts in sustainability, and we have been pioneers," said Labrie in an interview.

Torstar Printing Group came in 14th this year. Bob Hepburn, a spokesman for the Toronto Star, said the company has had a good relationship with Canopy.

"We think we have good policies in place vis-à-vis our plant operations," said Hepburn. "We comply with all environmental legislation and we've worked with Canopy for quite some time. In the past they've been quite praiseworthy of our efforts."

Editor's note: This story was updated at 2:11 p.m. ET to include comments from Marquis Book Printing.