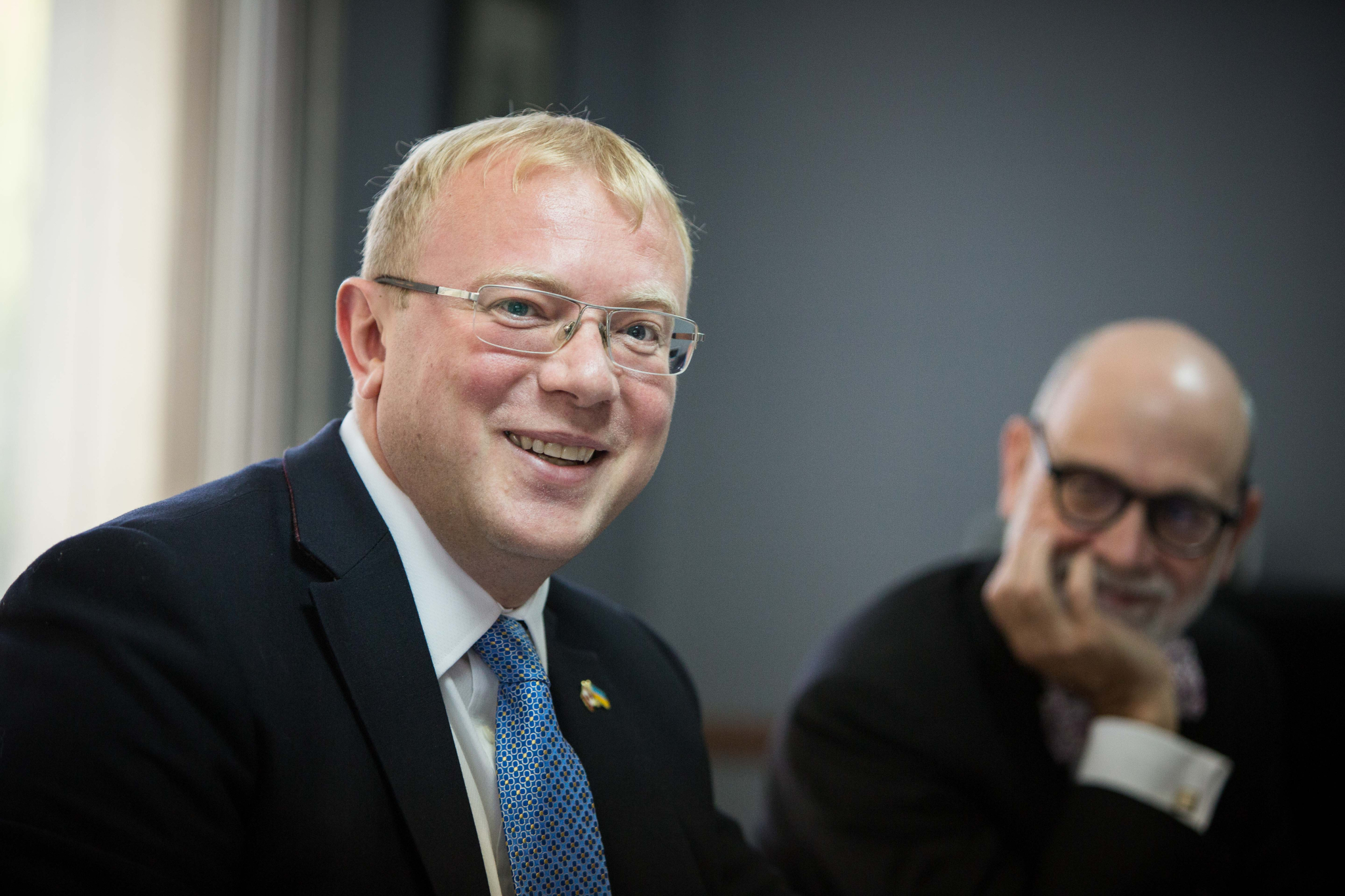 Ukrainian Ambassador Andriy Shevchenko speaks to media at a briefing at his embassy in Ottawa on July 28, 2017 as David Usher, director general for trade negotiations at Global Affairs Canada looks on. Photo by Alex Tétreault
Previous story
Next story

Andriy Shevchenko said July 28 that the Canada-Ukraine Free Trade Agreement, signed last year and set to take effect Tuesday, will provide a "security spillover" effect, fostering a more sustainable economy that has a better chance of supporting a lasting peace down the road.

"We see Ukraine as a new frontier of the free world," said the ambassador at a media briefing at his embassy in Ottawa.

The United States recently appointed a special envoy for Ukraine to help end “the war between Kyiv's forces and Russia-backed separatists,” according to Radio Free Europe. Kurt Volker said July 23 that "the level of ceasefire violations on (a) daily basis is astonishing” and that "this is not a frozen conflict, this is a hot war.”

The American position in the region is especially relevant now that a new round of sanctions driven by the U.S. Congress is "intent on punishing Russia for its meddling in last year’s [U.S.] presidential election," the New York Times reported.

The sanctions would "almost surely" affect the Russia-Germany pipeline Nord Stream 2 which would carry Russian natural gas under the Baltic Sea, bypassing Ukraine, the newspaper wrote. There has long been an interest in Canada in replacing Russia as Europe’s gas supplier, although the country is still expected to dominate the region for decades.

The Canadian Armed Forces' Operation Unifier, which is deployed to Ukraine until March 2019, has trained more than 4,780 Ukrainian soldiers as of July 1, 2017, according to the Department of National Defence.

Meanwhile, Canada is hoping that the trade deal will help support economic reform and development in Ukraine. “We hope it will pave the way for long-term security and stability,” said David Usher, director general for trade negotiations at Global Affairs Canada, who sat next to the ambassador at the briefing.

Canada's foreign affairs minister Chrystia Freeland is of Ukrainian heritage and is considered to be a critic of Russia. Freeland is part of a list of Canadian politicians barred from entering the country that also includes Official Opposition leader Andrew Scheer.

The new trade deal comes into force on Aug. 1, at which point import duties for 72 per cent of Canadian goods will be eliminated, said the ambassador, including for seafood, grain crops, peanuts, chocolates, juices and other products.

Duties on a further 27 per cent will be eliminated over the seven-year period, he said, and both governments expect 98 to 99 per cent of tariffs in either direction to be lifted after seven years.

Paul Darby, program director for the Canada Ukraine Trade and Investment Support project, said at the briefing that four sectors come out as “big winners” in the deal.

These are: fish, especially frozen and crustaceans like lobster; pharmaceuticals, drugs and chemicals; transportation machinery; and electrical machinery such as aircraft engines.

He also noted the agreement does not yet have an investment chapter, which will be negotiated over the next two to three years.

Asked by National Observer about the deal’s environmental standards, Shevchenko said the two countries “share many pieces of the progressive agenda.”

“Environment and climate change is where we're on the same page,” he said. “This is one of the fields where we can learn a lot from Canada, whether we're talking about energy efficiency, how to fight pollution, or new sources of energy."

The environmental chapter assures that neither country will lower their environmental standards to promote trade or investment, said Usher. This is subject to dispute settlement, he said, if Ukraine believes that Canada isn't following this provision, for example.

"In this particular issue, Canada really took a lead during the negotiations," said the ambassador. "This is one of the fields where there are a lot of benefits."

In recent years, Canada and the U.S. have both deployed geological survey teams, including representatives from industry, to evaluate Ukraine's energy resources and its potential for growth in areas such as fracking. This strategy could also allow European countries to diversify their sources of energy and reduce dependence on Russia.

"Oil and gas, and in particular unconventional (shale) extraction, continues to be a sector of interest for Canadian companies who have capacity in exploration, equipment and services," says Global Affairs Canada in its 2015-17 market access plan for Ukraine.

Marc-André Poirier, who works for Trade Minister François-Philippe Champagne and was also present at the briefing, said a formal reception to launch the deal's implementation will occur Aug. 8 in Toronto in partnership with the Canada-Ukraine Chamber of Commerce.