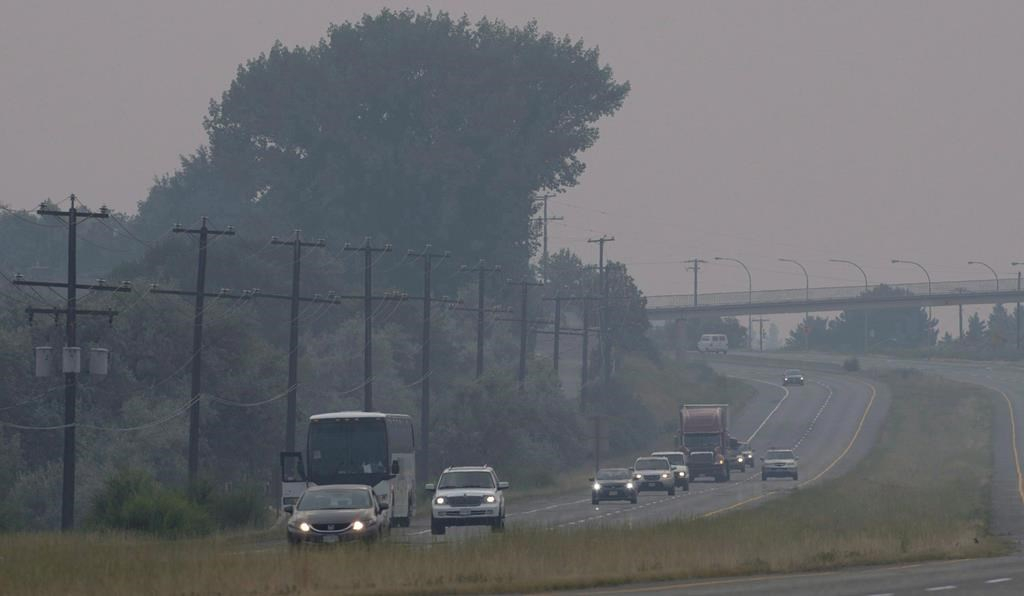 Cars and trucks drive though the thick smoke caused by wildfires just outside of Kamloops, B.C., on July 16, 2017. File photo by The Canadian Press/Jonathan Hayward
Previous story
Next story

Thousands of people who rushed out of their homes as a wildfire neared Williams Lake are being allowed to return to the Interior British Columbia city, but with a warning that they could be forced to leave again.

Mayor Walt Cobb said he couldn't be happier an evacuation order that went into effect on July 15 was being lifted on Thursday.

"The wildfires near our community are not 100 per cent contained and due to the changing weather conditions an evacuation could happen," he said. "So welcome home and please be as orderly in your return as you were during the evacuation."

Cariboo Regional District chairman Al Richmond said that while an evacuation order for Williams Lake and 10 surrounding areas was being lifted, residents of five other areas could still not return home due to ongoing wildfire dangers.

Richmond said the returning evacuees should keep their belongings packed because they may have to leave at a moment's notice if another evacuation order is issued.

"People need to consider, particularly those in rural areas, that the areas have been profoundly affected by wildfire. The services you used to rely on may be limited for some time," he said

Richmond said people headed home should bring back basic necessities such as food and prescription medications to last them for up to a week.

Hospital and ambulance services as well as grocery stores and gas stations were being re-established in co-ordination with local and First Nations governments and agencies including the Red Cross, he said.

North and south routes into Williams Lake along Highway 97 reopened on Thursday as the regional district urged residents to watch for livestock and wildlife on roads around Williams Lake because many fences were burned in the area.

Mounties and Armed Forces personnel were to be stationed at checkpoints but the RCMP warned residents to be prepared for significant delays on main routes.

A so-called resiliency centre was also established in Williams Lake so returning residents could connect with social assistance and insurance agencies as well as the SPCA and mental health and counselling services.

The regional district recommended homeowners and land owners work with an insurance agency that could assess dangerous trees through a qualified arborist.

Hot and dry conditions saw 14 new fires Wednesday including one east of Kamloops that led the Thompson-Nicola Regional District to declare a local state of emergency and issue two evacuation orders covering about 60 properties.

BC Wildfire Service information officer Max Birkner said the fire near Monte Lake grew dramatically but as of Thursday mapped at around 1.5 square kilometres in size.

Birkner couldn't confirm if any structures had been lost.

With no rain expected to bring reprieve in the coming days, RCMP are reminding the public to adhere to fire bans and other restrictions meant to prevent the situation from worsening.

She said crews also had to put out a campfire the hikers had made the previous evening and transport them out of the area by helicopter.

"It's really unfortunate these hikers' blatant disregard of park closures resulted in the diversion of valuable resources and assets, mainly people and a helicopter, which would have otherwise been used in fire suppression efforts," Linteau said.

She said the hikers were issued two fines totalling $1,233 and reminds the public that anyone convicted of causing a wildfire can be liable for the cost of damages, face up to $100,000 in fines and a year in prison.