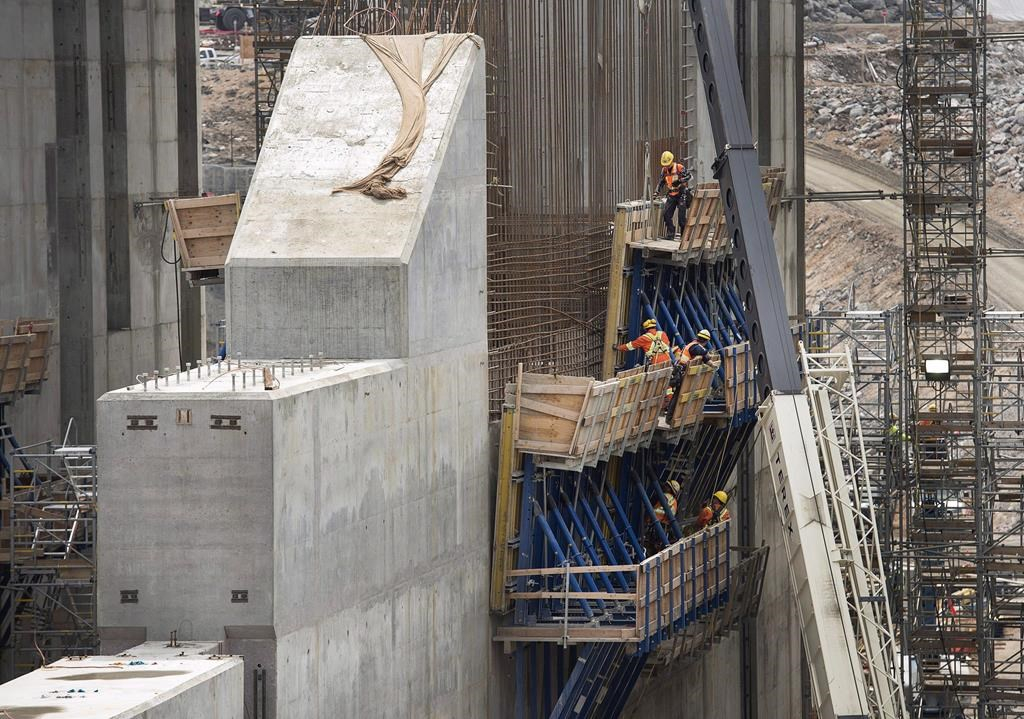 The construction site of the hydroelectric facility at Muskrat Falls, Newfoundland and Labrador is seen on Tuesday, July 14, 2015. File photo by The Canadian Press/Andrew Vaughan
Previous story
Next story

Three Labrador protesters jailed after refusing to obey a court injunction ordering them to stay away from the Muskrat Falls hydroelectric project site are to be released.

The trio — Jim Learning, Eldred Davis and Marjorie Flowers, who activists describe as Inuit elders — were taken into custody July 21 and held at Her Majesty's Penitentiary in St. John's, N.L.

Their incarceration became a focal point for protests around the Muskrat Falls megaproject, with about two dozen protesters rallying Monday at the Confederation Building in St. John's, where they presented a 3,000-name petition calling for their release.

"People are trying to have their voices heard and sending them to a penitentiary in St. John's thousands of kilometres away from their home is definitely a bit extreme," said protest organizer Angela Giles, who said the three are simply trying to protect their land and the environment.

All three were released to return home after court appearances Monday, VOCM reported.

Davis signed an undertaking, while Flowers and Learning will be under house arrest until their next court appearances, VOCM reported. Learning is 79 years old and being treated for prostate cancer.

Andrew Parsons, the province's justice minister, said in a statement Monday he was not involved in the decision to transfer the trio to St. John's.

"The Government of Newfoundland and Labrador fully appreciates that people have legitimate concerns with the Muskrat Falls project. Our government supports the right to lawful and peaceful protest however once the level of protest exceeds the limits laid out in the law, we must respect judicial decisions," he said in the statement.

A smaller protest, organized by the Council of Canadians, was also held Monday outside the Halifax headquarters of project partner Emera Inc.

Emera is funding the $1.6 billion Maritime Link, a 170-kilometre subsea cable that will eventually carry electricity from Newfoundland to Cape Breton.

Giles said the public needs to show opposition to the Muskrat Falls project by contacting provincial and federal politicians.

"Nova Scotians are implicated in this as well through the Maritime Link," she said.

Giles said her group hasn't yet attempted to talk to Emera officials.

In addition to dropping the charges against Learning, Davis, and Flowers, the protesters said they want a methylmercury agreement signed in 2016 to be honoured by lowering water levels and clearing vegetation around the Muskrat Falls site. They also want an independent review on the stability of an earthen dam near the site and a forensic audit of Newfoundland and Labrador's Crown utility Nalcor Energy.

"From the very start we were concerned about the lack of information, the lack of due diligence performed by Nalcor . . . and the lack of adherence by Canada to consult with indigenous peoples who will be impacted by this project," said Gretchen Fitzgerald of Sierra Club Canada.

Nalcor announced in June that it would adjust the spillway gates to lower the water levels in the river above the Muskrat Falls generation facility.

Marshall said he wasn't looking to "do anything that will endanger people.''

The cost of the beleaguered project is estimated at $12.7 billion with financing — a figure about $5 billion higher than when the project was sanctioned five years ago.