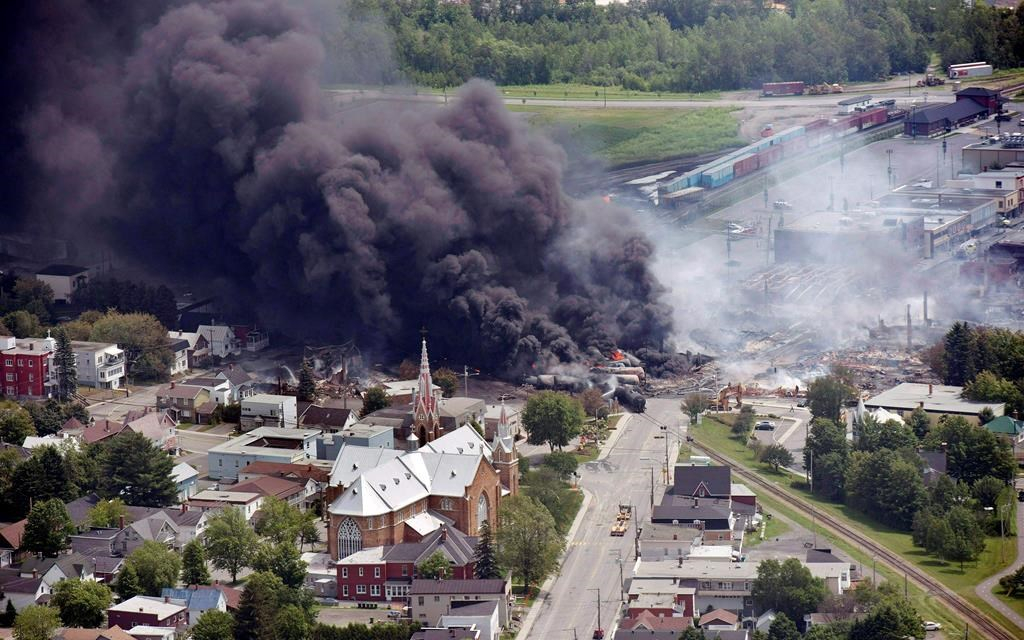 In this July 6, 2013, file photo, smoke rises from railway cars that were carrying crude oil after derailing in downtown Lac Mégantic, Que. File photo by The Canadian Press/Paul Chiasson
Previous story
Next story

The population of Lac-Mégantic and its neighbouring towns are heavily divided on what to do with the railway that runs through the heart of the town, Quebec's environmental review agency said Monday.

The agency, known as the BAPE, favoured one of three possible rail bypass options on the table in a 77-page report.

But the BAPE also said leaving the current rail track untouched merits a fuller treatment — a position Lac-Mégantic has excluded.

The debate over a rail bypass has raged since a train carrying crude oil derailed and exploded in July 2013, killing 47 people and wiping out much of Lac-Mégantic's downtown core.

Pierre Mercier, Lac-Mégantic's deputy mayor, said in an interview the status quo is being excluded by the town because "it is so obvious" it isn't an option.

"We need a bypass, it is the only option," Mercier said. "Maybe we're being rapped on the knuckles a bit (by the BAPE), but for us it is obvious that we need a bypass."

The city said it was pleased the agency came out in favour of one of the bypass options.

The agency called the 11.7-kilometre option, which would cost an estimated $115 million and include the dismantling of the current track, the best choice from an environmental, social and economic standpoint and should be considered.

It made its recommendations after hearing from some residents and participants in public consultation hearings between May and July.

Some citizens believe the bypass will do nothing except move the problem elsewhere, while others are firm the bypass solution is essential.

Of those who participated, the agency noted that 59 Lac-Mégantic residents were in favour of the status quo, while 43 favoured a bypass. In nearby Frontenac, 30 opted for the status quo and four preferred a bypass.

The BAPE concluded a lot of work still needs to be done before finding an adequate solution for the municipality.

The agency says residents need to be better informed about the possible consequences of keeping the current railway track as is.

"None of the rail bypass proposals seem to adequately and satisfactorily to their expectations," the agency noted.