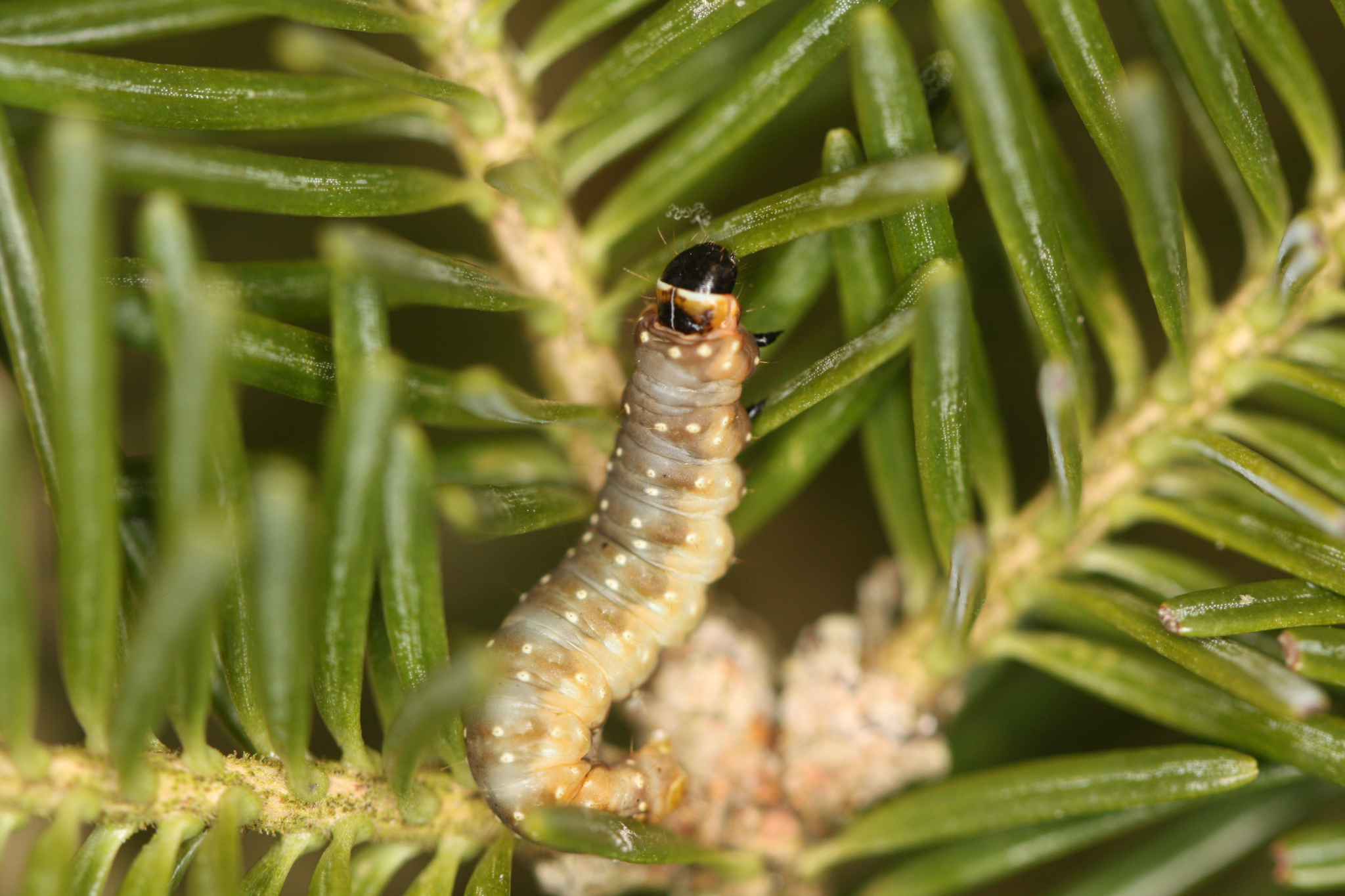 High above the northern shore of the St. Lawrence estuary in eastern Quebec, Karl Blackburn could see the damage to the forest below.

He was seeing the signs of an epic battle as Canada's forest products industry finds itself locked into what he described as a race against time.

He said the impact has been massive, with significant consequences for his company.

"Just yesterday I was flying over the land which is largely affected by the spruce budworms and which is really sad to see how massive the affected land is," said Blackburn, director of Canadian public affairs and government relations for Resolute Forest Products on July 28, in an interview.

Blackburn declined to provide estimates of his company's losses. But Resolute is one of the largest forest products companies in the world, managing millions of hectares of forest land.

"It's really a race against time which we are seeing, as an industry, to be able to maximize as much as possible the cutting of affected trees and to minimize the loss and waste of these trees that we won't have had time to cut."

At the heart of the problem is the spruce budworm, a tiny green caterpillar which is indigenous to Canada and a well-known to scientists and industry. The green crawling creature is an insect that feeds on the needles of fir and spruce trees.

Lately it has been spreading and causing headaches for both the tourism and forestry sectors. This has prompted scientists to start investigating outbreaks and determining what role global warming is playing in the rapid spread of the species in Quebec and Atlantic Canada.

“There are reasons to believe climate change is involved in their changes in behaviours,” said Jacques Régnière, a scientist at Natural Resources Canada.

“The budworm is an insect which—like all insects—respond(s) very very closely to temperature and if there is warming, it facilitates its life in these places that were traditionally colder and that are warming up at the moment.”

When the budworm feasts on these trees, it puts the forestry and tourism sectors in danger: a feeding frenzy that goes on for between four and seven years would make spruce and fir trees unable to photosynthesize to survive, and they die.

“It’s a problem for humans because they’re competing with the budworms for the same resources which is the fibre resource or a beautiful green forest for tourists, fishermen, and hunters," said Régnière. "But (the budworm) has never destroyed the boreal forest, it regenerates itself very easily after an outbreak of budworms... the problem is we want the wood so we are in competition."

In Quebec, there are about 80,000 jobs in the forestry and wood processing sectors and over 250 Quebec municipalities depend directly on forest-related activities, according to the Quebec ministry of energy and natural resources. In New Brunswick, forest industry-related jobs touch over 20,000 families. That province is the most forestry dependent per capita in Canada, with 4.7 per cent of its GDP derived from the sector, according to Mike Légère, executive director of Forest NB.

For Atlantic Canada, the economic loss of the budworm outbreak is forecasted at $15.3 billion over the course of 30 to 40 years, added Légère.

Scientific research could help ease the financial, environmental and social consequences of the budworm outbreaks.

“It is key to finding a cost effective alternative to expansive and expensive spray programs. It also presents a more socially acceptable manner to control the budworm in that it attempts to reduce the treatment footprint,” Légère​ said in an email.

As of today, the main Canadian outbreak is located in Quebec, where there are about 5 million hectares of forest infested by spruce budworms, according to Régnière.

In this region, the caterpillar's natural enemies aren't able to keep the species in check, so industry and communities are using insecticides to stamp them out as soon as they appear.

But because this method is labour-intensive and extremely costly, only some parts of the forests are protected.

“In Quebec at the moment, what we’re doing is to protect foliage which means spray(ing) the forest(s) which are of high value to the forestry or tourism industry and we try to keep these trees alive during an outbreak,” Régnière explained.

In New Brunswick, where the outbreak is not as severe as in Quebec, scientists have been working on preventative measures which could limit the use of insecticides and the damages to forests by the budworm. Régnière​ estimated that 150,000 hectares had already been treated so far this year in New Brunswick, compared to almost 239,000 hectares in Quebec.

While another outbreak 30 years ago had started in the middle of New Brunswick, this time budworm moths are migrating from Quebec more slowly, which gives scientists an opportunity to study their population dynamics. Increases in temperatures help the moths fly longer distances.

Citizens have a role to play in monitoring budworm outbreak

Rob Johns and Emily Owens, scientists at Natural Resources Canada, have been working on a research program with a citizen science project component.

To monitor the budworm population, they give citizens traps that need to be checked at least once a week, and then again at the end of the migration season in August and September. The citizen scientists then send the moths to the laboratory where they are analyzed. The traps work with pheromones, which is like a natural perfume used by the female to lure her prospective mates.

Johns says the program has involved heavy monitoring and a very aggressive management of the spruce budworm in the northern part of New Brunswick to limit the spread of the bug to the south.

“We have mass dispersal event(s) where upward of a trillion moths can fly from Quebec to New Brunswick,” added Emily Owens.

A resident of Campbellton, New Brunswick filmed spruce budworms covering bushes and cars in a parking lot. Video by raisdfist published on July 25, 2016.

The citizen monitoring program was started in 2016 and the response has been positive.

“To put things in perspective, a good citizen science program has a return rate of data of about 20 to 40 per cent but we’re talking about (an) 85 per cent return rate from our citizen so they’re very engaged,” said Owens.

Johns added that engaging and educating the public about efforts to control outbreaks was also crucial, in the wake of pesticides scares from the past when provinces such as New Brunswick allowed the use of toxic products such as DDT in the 1950s and the '60s.

Johns pointed to marine biologist Rachel Carson’s book Silent Spring, which documented the effects of the insecticide on fish, insects and humans. Carson found DDT killed fish and insects exposed acutely to these chemicals and had long-term health effects for humans.

“There’s long memories of these sorts of controversies of the past so we spend a lot of time talking. We’re not using anything like that, these insecticides are banned now but still there’s the question: what are you (treating) budworms with?”

Outbreaks of the spruce budworm aren't the only matter of concern for scientists and the forestry industry. With temperatures rising, new insects are arriving in Canada.

“Canada is becoming more favourable to a lot of insects which previously were stopped by winter. Now, doors are open because winter is getting weaker and weaker,” said Christian Hébert, a scientist at Natural Resources Canada and author of a new book about insects in Quebec’s forests.

“Problems are going to change because we’re going to be confronted with organisms we know poorly because we’ve never really studied them.”

In his 2017 book, Insectes des arbres du Québec, Hébert documented the changes he's witnessed in Quebec in the past couple decades. The last book on such a topic was published in 1979. Among his discoveries, he found there are many more new species and about one in four pest insects in Quebec that are unknown.

A number of new challenges are awaiting, and Jacques Régnière and Christian Hébert stressed that there would be a need for more funding and research in the coming years.

Despite the dire situation at the moment, the forestry industry is hopeful that research could help them.

"Will science allow us to completely prevent these sorts of outbreaks one day?" asked Blackburn. "We certainly hope so because unfortunately they have very important consequences on many region's economies and on the forestry industry's strength."

By The Canadian Press | News, Politics | July 9th 2017
State Of The Animal

Phasing out Canada’s number one insecticide – a great corporate strategy?

'Moving away from the fear factor:' Bringing insects into mainstream diets