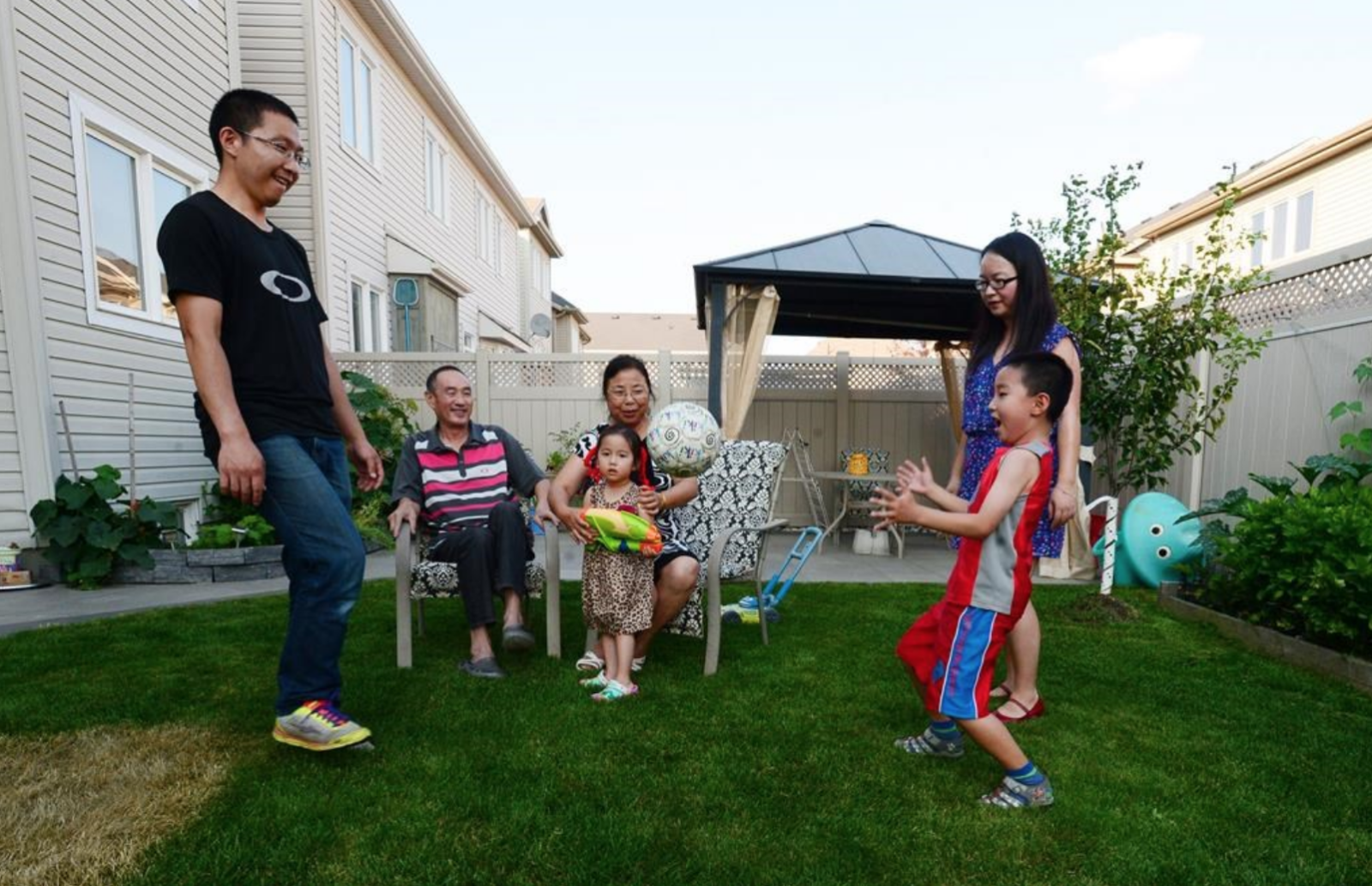 Yi Jiang and husband Jianqiao Sun play soccer with their son Sunny Jiang as daughter Jenny Sun sits with grandparents Youfang Jiang and Li Zhang in the backyard of their home in Ottawa on Monday, July 31, 2017. Photo by The Canadian Press
Previous story

About a year after Yi Jiang and her family moved to Ottawa from China, they found themselves sharing a two−bedroom apartment with her parents.

After living together in Shenzhen, it seemed only natural that once the entire family was in Canada, her parents would live with her, her husband and their young son, she said. The couple has since had another child, and last year all six moved to a house in the suburbs.

"It’s very important for me to live with them ... they are the most important people in my life and I am the only child," said Jiang, a producer for a Mandarin radio show.

Such arrangements are very common in China and many continue the practice after they immigrate, she added.

Such appears to be the case in Canada, where the latest tranche of Statistics Canada data from the 2016 census shows a significant spike in the growth rate of multigenerational households — a 37.5 per cent increase since 2001, surpassing the 21.7 per cent rate of growth in households overall.

Some 2.2 million people, 6.3 per cent of the population living in private households, were part of a multigenerational living arrangement — at least three generations under one roof — last year, the agency reported Wednesday.

Statistics Canada attributes the increase, in part, to "Canada’s changing ethnocultural composition," as well as "housing needs and the high cost of living in some regions of the country." The aging population has also played a role, experts say.

The trend is also prominent in Indigenous communities: in Nunavut, one in eight households was multigenerational, while in the Northwest Territories, the living arrangement makes up 4.3 per cent of all households.

The ratio was 3.9 per cent in Ontario and 3.6 per cent in B.C., two provinces that are home to the bulk of Canada’s immigrant population. Cities such as Abbotsford and Mission, B.C., Toronto and Vancouver recorded the highest percentages locally.

Such communal living arrangements may seem like a novel new trend, but in fact it’s a long−standing practice, said Nora Spinks, CEO of the Vanier Institute of the Family.

Some families end up living together by choice, some by necessity, she added.

There may be a cultural expectation that adult children welcome their parents into their home, or a need for grandparents to provide child−care, or a push to split living expenses in the face of a housing crunch, Spinks said.

Sometimes the move is initiated by parents or grandparents who need care, sometimes by 20−somethings who "boomerang" home after going through a breakup or layoff, she said. "It goes in all directions," she said.

Indeed, the boomerang effect got special treatment in Wednesday’s census data. Statistics Canada reported that 34.7 per cent of young adults aged 20 to 34 were living with at least one parent last year, up from 30.6 per cent in 2001.

And where it was previously assumed that those 20−somethings would move back out after landing on their feet, Spinks said the latest data show many have continued to live with their parents even after forming unions of their own or having children.

The percentage of young adults living with a family of their own and without their parents dropped from 49.1 per cent in 2001 to 41.9 per cent in 2016

Regardless of what causes families to pool resources, such arrangements have a ripple effect on the economy, Spinks said. And some may find it difficult to untangle their finances down the line — particularly when it comes to real estate — putting a strain on relationships.

"You might be subsidizing your parents by giving them your Netflix password or putting them on your cell plan or something, and so there is a cash value of that — if they wanted it and you didn’t give it to them they would be spending $10 a month for Netflix," she said. "So it does have positive and negative economic and social implications."

Older relatives may wish to maintain a more traditional lifestyle, while children want to fit in with their peers, she said, putting pressure on parents from both sides.

The transition may be easier in families with a history of multigenerational living, she said.

Having her parents so close has spared Jiang and her husband — who both work outside the home — a mountain of stress and expenses. They help with child care and prepare most meals, she noted.

It has also allowed her children, 5 and 2, to receive care in Mandarin and grow closer to their grandparents.

"I know there are always barriers, cultural differences, and lack of understanding around us in Canada, but it is beneficial for my parents and I to live together," she said.

"My parents are getting older, we are sensitive to each other’s needs and to help each other, not only in life, but also in psychology. I think multiple generations under one roof may alleviate a lot of social burden and be beneficial to society."