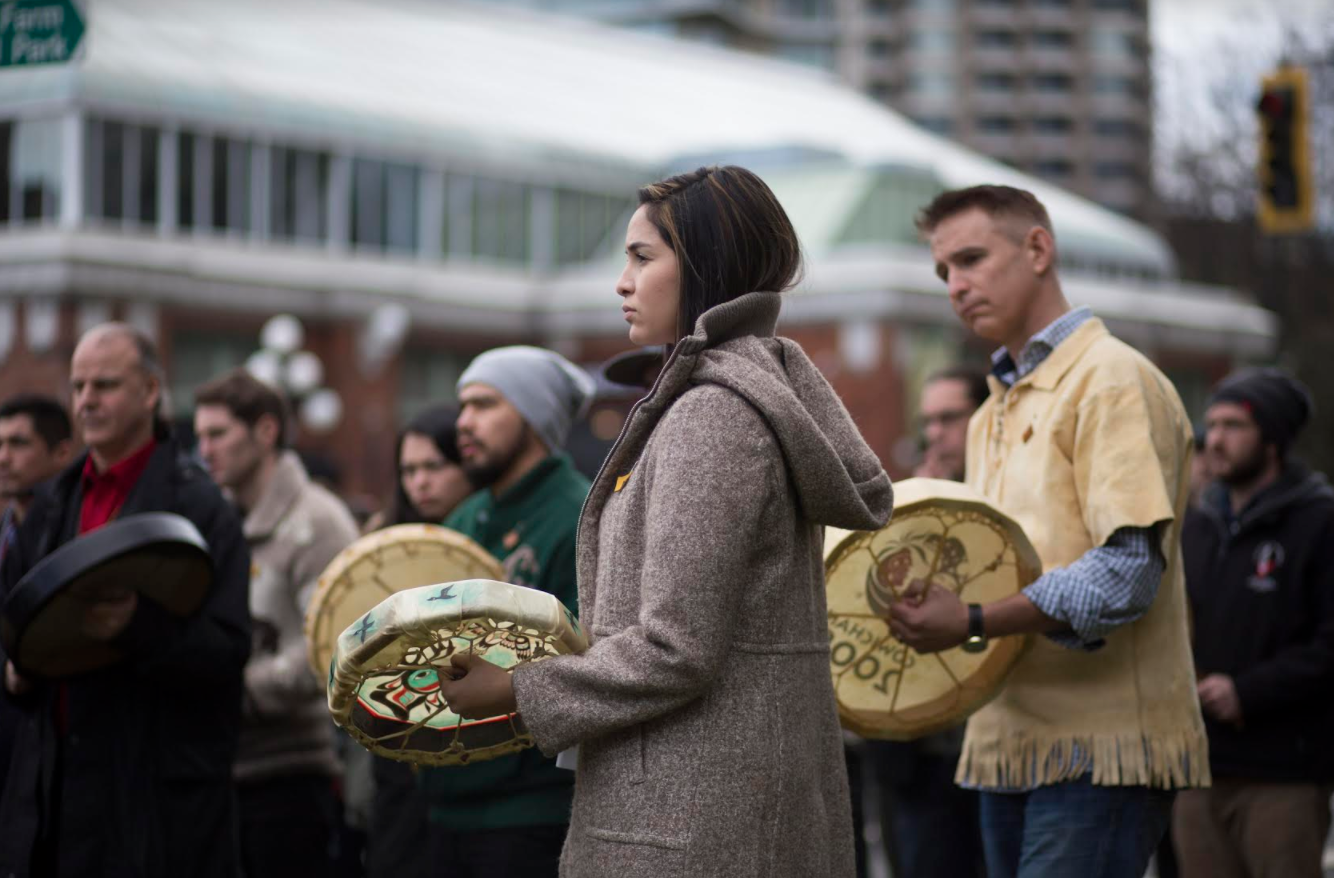 Six years ago, British Columbia’s Raven Lacerte went on a hunting trip that would trigger a nationwide fashion trend with a political edge.

She and her father Paul — both members of the Carrier First Nation — had caught a moose and were skinning it along B.C.’s infamous Highway of Tears. More than 20 women and girls have disappeared or been murdered on this stretch of the east-west Highway 16, between Prince George and Prince Rupert, since the 1960s.

As they reflected on the profound sorrow of their surroundings, they had an idea: what if the moose hide could be used to help end violence against women and girls?

So the father-daughter duo cut up the hide and fashioned it into small square pins that could be worn as a symbol of commitment to ending male-on-female violence, both Indigenous and non-Indigenous. The story is familiar to hundreds of thousands of Canadians today, who have worn Raven and Paul’s signature yellow squares as part of the nationwide Moose Hide Campaign to involve men in the solution to ending domestic violence.

“It just continually blows me away by how far it’s gone since then and the people that it’s reached,” Raven told National Observer from her home in Victoria, B.C. "I think it’s very effective when people have the ability to do things themselves and own it for themselves."

Horror stories the stuff of nightmares

Since 2011, the initiative has set up a grassroots presence in roughly 300 communities, sparked thousands of conversations about the causes of violence, and brought hundreds of men to the streets to march for an end to the abuse of women and girls. Through workshops and meetings, it has provided a safe space for men and women to begin their healing journeys and speak their truths, no matter how shocking and traumatic those truths may be.

But behind the scenes of that powerful narrative is the impact it has had on Raven and Paul who — in little more than five years — have been exposed to enough horror stories to fuel a lifetime of nightmares. It’s been particularly profound for Raven, who co-founded the Moose Hide Campaign when she was just 16 years old.

“It hurts my heart when I hear people tell those stories,” she said. “But I’m always trying to protect myself, understand where the anger is coming from and have as much hope as I can to make things better for the future.”

Now 22, Raven said she has learned to put a “protective shield” around herself that keeps her work from weighing her down as she travels across the country meeting survivors, perpetrators and problem-solvers. The work is never ending — Raven is a member of the B.C. government’s advisory council on Aboriginal women, a youth ambassador for the Canada C3 project connecting Canadians from coast to coast, and she regularly speaks with politicians and press about how they can get involved in the Moose Hide Campaign.

For every bit of darkness her work has exposed her to, she said she sees even more compassion, resilience and determination to heal.

“I’ve learned so much about people, about myself and my family, what the world is like for Indigenous people and non-Indigenous people, and I’ve just realized how much space there is for healing and love,” she explained. “People are really ready for something like this and I can see it when there’s the ‘aha moment’ in people when we’re out speaking.”

More than 500,000 moose hide squares have been distributed since the hunting trip six years ago, but Raven and Paul's goal is to hit the one million-mark by 2020. At that time, they'll launch a campaign to have one million men fast for 24 hours as a demonstration of commitment, humility, spirituality and sacrifice in the quest to end violence against women and girls.

But it starts with a 'pilot' fast on Oct. 5, said Paul, who joined Raven in an interview with National Observer. The pair are currently petitioning Ottawa to have 500,000 federal government employees participate in the fasting ceremony, and recruiting businesses, universities and Indigenous organizations who are willing to do the same.

Prime Minister Justin Trudeau's government has emphasized that no relationship is more important than its relationship with Indigenous peoples, and has unwaveringly committed to implement all of the 2015 Truth and Reconciliation Commission's calls to action.

Support for the MMIWG inquiry

The Moose Hide Campaign is non-partisan, but Raven and Paul said they "start with elected officials" because the plight of Indigenous women and girls is tied so deeply to statutory and regulatory barriers, including institutional racism. Broadly speaking, they believe governments focus too much on studies, terms and conditions and not enough on "good medicine."

Paul and Raven are now working to secure federal funding that will help them set up roadside campaign events immediately following cross-country hearings for the national inquiry into missing and murdered Indigenous women and girls. The pair has already met with the inquiry's staff and commissioners.

Paul said he's concerned that the inquiry focuses too much on collecting statements and not enough on identifying the root causes of why Indigenous women and girls go missing and murdered in the first place.

"Part of the challenge is that the inquiry is going to roll into a community, let's say like Winnipeg, and then surface a whole bunch of pain and the close up shop and leave town," he explained. "One of the things that's important for us is that there's a space within two weeks of when the inquiry closes in each community where men can show up in public with signs and say, 'We hear you, we believe you, we're sorry...'"

Without that space, both Paul and Raven fear that men who feel guilt, shame or anger will have nowhere to go — nor will men who are seeking a healthy platform to support an end to violence against women. A lack of male support, they explained, means women who participate in the hearings could be re-victimized at home or subject to backlash from male friends and family.

"It’s tough," added Raven. "I think the idea of reconciliation is complicated and different for everyone. From my own perspective I feel hopeful and I look at it from a positive lens...People are listening and opening their ears, eyes and hearts to Indigenous people. I think we’re working towards something good."

A matriarch in the making

When Raven isn't working for the Moose Hide Campaign, she said she tries to spend as much time enjoying the wilderness with her family. The bright-eyed 22-year-old already has already completed the Indigenous Studies Program at Camosun College and will be moving on to finish a bachelor's degree at the University of Victoria in the fall.

Over the years, she has met foreign dignitaries and several premiers. She has spoken at the B.C. legislature and helped secure the proclamation of Feb. 16, 2017 as 'Moose Hide Campaign Day' in B.C.

Her father describes her as a "warrior woman," a hunter and a "gentle soul, but asked if she feels she's a trailblazer, Raven answers firmly:

"I do not see myself as a trailblazer. There are many, many, many generations of ancestors that have led us to this path right now. I feel honoured to be a small part of it, but I’m on the backs of my ancestors in doing important work that needs to be done. There have been lots of matriarchs in my life that have helped guide me to where we are now."

Raven said she's not sure what career path she might pursue in the future, but for now, is "just trying to see where things take me."

MMIW live on in Alces alces.

MMIW live on in Alces alces.
Thank you, Raven!

What a wonderful story. Just

What a wonderful story. Just when 'most' news is bad you read a story like this to give one hope for the future. The dying whales story is almost too much to bear especially when the owners of the ships, after being told to slow down, respond by saying 'time is money'. He/they should be investigated slapped with huge fines. Hit them in the pocketbook and they'll sit up and take notice.