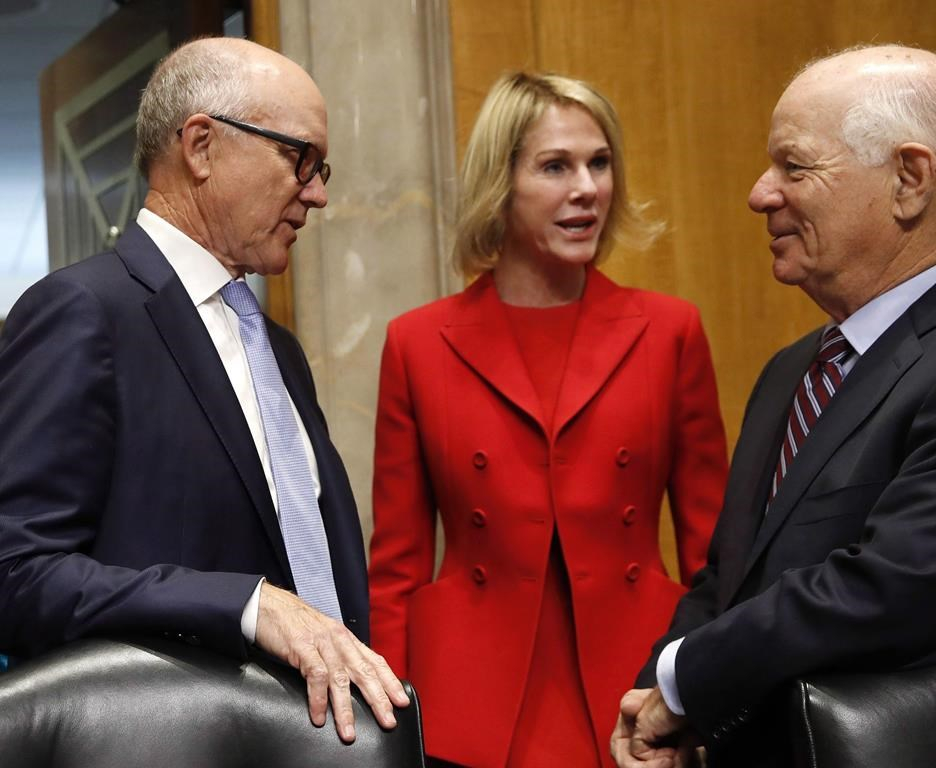 Woody Johnson speaks with Kelly Knight Craft and Sen. Ben Cardin, at the start of a Senate Foreign Relations Committee hearing on their nominations, on Thursday, July 20, 2017, on Capitol Hill in Washington. File photo by The Associated Press
Previous story
Next story

Donald Trump's ambassador is heading to Canada: the United States Senate has swiftly confirmed Kelly Knight Craft, endorsing her nomination in time for her to begin work as major trade negotiations start.

The confirmation was announced Thursday by the Republican leader of the Senate, Mitch McConnell.

He applauded the appointment of his fellow Kentuckian, whom he knows through politics back in their home state, and whom he publicly endorsed during her congressional hearing two weeks ago.

That swift two-week turnaround is faster than how the Senate handled the last ambassador's appointment, as it allowed the nomination of Barack Obama's pick Bruce Heyman to languish for months before proceeding.

It came after a breezy confirmation hearing.

Anything but a grilling, Knight Craft was asked two questions about basketball, and others about Russian election-meddling and NATO in her congressional hearing. She declared that she believed Russia interfered in the U.S. election.

She was also asked about promoting U.S. exports to Canada, and mentioned softwood lumber, dairy and poultry as priority areas.

This appointment allows Knight Craft to start work at a sensitive moment in Canada-U.S. relations — the two countries and Mexico will start negotiating an update to the North American Free Trade Agreement on Aug. 16.

Knight Craft is a longtime philanthropist, wife of a Kentucky coal magnate, and supporter of Republican causes who organized inaugural events for the state's governor and for President Donald Trump.

"We look forward to working with you to strengthen #CanUS ties!," she tweeted.

"(Our countries') partnership is more important than ever, see you soon."

The new ambassador's state governor sang her praises during a recent meeting with Prime Minister Justin Trudeau. At a governors' conference in Rhode Island, Matt Bevin told Trudeau: "You're going to have a good colleague... You're getting someone who's gracious, and very well-networked. Very respected.''

In a statement Thursday, McConnell saluted the new ambassador.

"Our two nations share much more than a border; we have a heritage of trade and security relations that benefit us both," said the Republican leader.

"As a proven advocate for our national interests, Kelly will use her position to continue the long history of friendship between the United States and Canada. I appreciate her willingness to serve our country once again, and I know that she will make Kentucky proud."