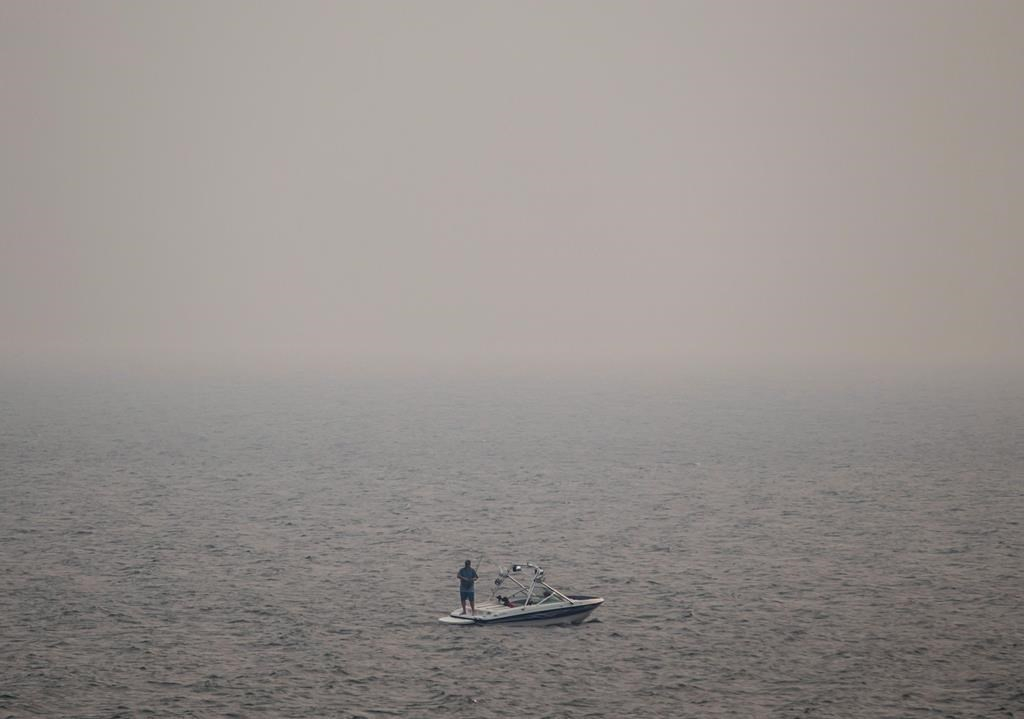 Thick smoke from wildfires fills the air as a man stands on a boat while fishing on Kamloops Lake west of Kamloops, B.C., on Tuesday, August 1, 2017. File photo by The Canadian Press/Darryl Dyck
Previous story

Poor air quality persists throughout the southern half of British Columbia as tinder-dry conditions continue to fuel wildfires.

Dr. Bonnie Henry, deputy provincial health officer, said there has been a recent spike in emergency calls and hospital visits from people suffering from respiratory and other conditions related to the smoke and heat, particularly in the Lower Mainland.

"Depending on the day and the time of day, the increase can be from 20 per cent to 50 per cent more than we've seen in the past 10 years in the same area," Henry said.

The BC Ambulance Service is monitoring the situation and staffing accordingly, Henry said, and health authorities are reminding the public to take precautions such as exercising indoors to avoid health problems.

Although a heat wave affecting the south coast ended Friday, Environment Canada is maintaining an air-quality advisory that spans from eastern Vancouver Island to Elk Valley on the Alberta boundary and as far north as Prince George.

People with medical conditions, infants and the elderly are encouraged to stay indoors — ideally in air-conditioned environments — as well as keep any necessary medications handy and stay hydrated.

Officials are also warning drivers to take it slow and be on alert for stopped vehicles and wildlife, since the smoke has reduced visibility on roads in some parts of the province.

There are 125 wildfires burning across the province and officials say crews are gearing up for more fire activity as hot, dry conditions continue in the days ahead.

Chief fire information officer Kevin Skrepnek said a chance of thunderstorms with lightning and little rain in some areas of the province in the coming days could spark more fires.

"If we do have lightning, there is a high likelihood we're going to be seeing new fires start as a result," he said.

The dry conditions have also caused the so-called Elephant Hill wildfire that began near Ashcroft to balloon to 1,100 square kilometres in size, triggering an expansion of evacuation orders.

About 600 staff and crew are responding to that fire, which Skrepnek said is a priority for the BC Wildfire Service.

"This fire has been an absolute monster," Skrepnek said, adding the terrain creates wind tunnels that fuel the blaze, making it a challenge for crews to control.

Although there is no rain in the forecast, a low pressure system could move in during the latter part of next week, bringing inflow winds from the ocean that could help clear the smoke in coastal communities, Skrepnek said.

There's also a chance cooler temperatures with some rain could come in the next 10 days, but Skrepnek added forecasting that far in advance isn't reliable.

"This situation in all likelihood is going to be getting worse before gets better and that's despite the extraordinary amount of hard work going on right now," he said.

There are 30 evacuation orders displacing more than 6,000 people across the province, and dozens of evacuation alerts remain active.