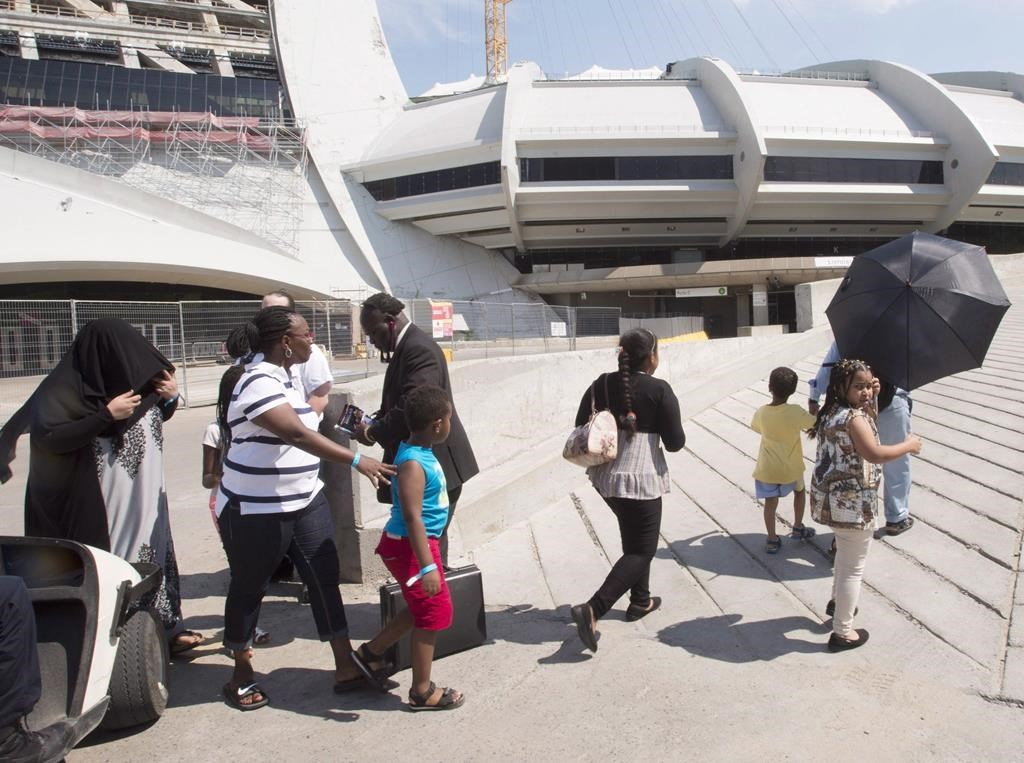 A group of asylum seekers leave Olympic Stadium to go for a walk, in Montreal on Wednesday, August 2, 2017. File photo by The Canadian Press/Ryan Remiorz
Previous story
Next story

Forty-one years after it first welcomed the world for the 1976 Games, Montreal's Olympic Stadium has been asked to throw open its doors once again.

The cavernous stadium, which is more accustomed to hosting sporting events and trade shows, is now being used as a temporary shelter for some of the hundreds of asylum claimants pouring across the New York-Quebec border every day.

Between now and September, up to 600 refugee claimants at a time will sleep on camp beds in a windowless common area, where fans attending Montreal Expos baseball games once passed through on their way to the bleachers above left field.

Beds, bedding, and basic toiletries are being provided by the Red Cross, while a branch of Quebec's Health Department is handling the newcomers' day-to-day needs.

Authorities have been scrambling to manage the flow of asylum seekers, which has tripled in the last two weeks from 50 to 150 a day.

Most of them are Haitians, who fear being sent back to their homeland if the Trump administration chooses to end a program that granted them so-called "temporary protected status" following the massive earthquake that struck in 2010.

Emmanuelle Paciullo, a spokesperson for the health centre that manages the site, says 500 people are currently housed at the stadium.

She says that while there are nurses and social workers on site to handle urgent health needs, the setup is basic and only intended for short-term housing.

She says the newcomers are moved into more permanent housing once they get their first social assistance cheques.

While the Olympic Stadium is only one of several venues being used as emergency shelters, it is certainly the most recognizable.

In recent years, the stadium has mostly drawn negative press for its chunks of falling concrete, a faulty retractable roof that has ripped thousands of times, and a staggering $1-billion price tag that took Montrealers three decades to pay off.

It has also built a diverse resume, hosting personalities and events ranging from the Rolling Stones to the CONCACAF Champions League soccer final to Pope John Paul II.

Pink Floyd played there, as have Celine Dion and One Direction.

In 2010, some 50,000 people attended a mass to celebrate when Brother Andre was named a saint by the Vatican.

It has also been used as a movie set, and its tower will serve as office space for hundreds of bank employees beginning this fall.

It is not even the first time the stadium has been called into use as a shelter.

In 1998, it was set up to receive residents displaced by a massive ice storm, although power was restored before it was needed.

It also served as a massive vaccination clinic during the 2009 H1N1 virus scare.

Given the venue's history of hosting large numbers of people, Essiminy says it's no surprise it has been pressed into service to respond to the incoming waves of refugees.

"The strength of the stadium is that it's able to transform itself depending on the needs of the people in the city, and this is a great example," Essiminy said.

With spike in asylum seekers, Montreal's Olympic Stadium to be used as shelter