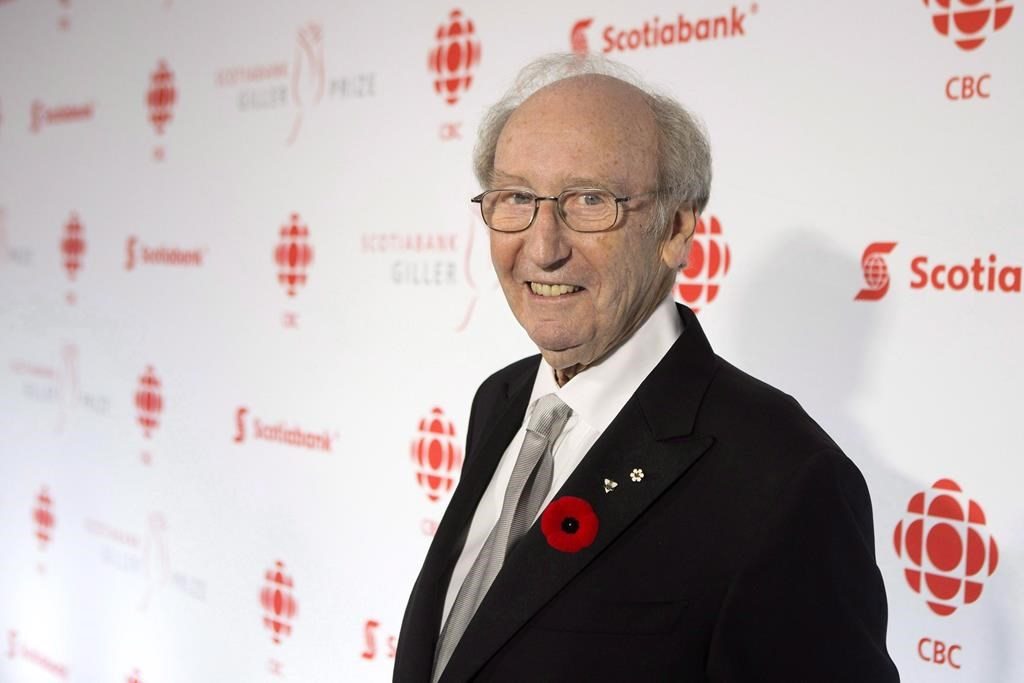 Jack Rabinovitch, founder of the Giller Prize, arrives on the red carpet at the Giller Prize Gala in Toronto on Tuesday, November 10, 2015. File photo by The Canadian Press/Chris Young
Previous story
Next story

Jack Rabinovitch, the beloved businessman who created the lucrative and prestigious Scotiabank Giller Prize literary award that boosted the profiles and sales of countless Canadian fiction authors, has died.

Rabinovitch died Sunday afternoon in Toronto, his daughter Elana confirmed. He was 87.

An obituary posted on the website of Benjamin's Park Memorial Chapel, which was handling the funeral said Rabinovitch died as a result of a "catastrophic fall" at this home last week.

The Montreal-born, Toronto-based Rabinovitch tackled several careers throughout his life, including journalism, food retail and real estate. But it was his Giller award that made him a recognizable face across Canada and internationally.

The idea for the renowned honour was hatched not over boardroom coffee but over bar drinks with author Mordecai Richler.

"It started at a pub in Montreal called Woody's and ended up at a famous restaurant in Montreal called Moishes, and over chopped liver we decided what to do," Rabinovitch told The Canadian Press at the Giller Prize gala in October 2012.

The prize was established in 1994, a year after the death of Rabinovitch's wife, literary journalist Doris Giller.

Rabinovitch wanted to create a literary award to honour Giller while also recognizing excellence in Canadian fiction — in long format or short stories.

"The only real major (literary) prize (back then) was the Governor General's and most people just felt that it wasn't right to just let the government handle the situation," said Rabinovitch, who was named Maclean's magazine "Man of the Year" in 1999.

"So private people like myself and various other people have started new prizes to highlight and admire new writers."

The Giller Prize initially endowed a cash prize of $25,000, which was the largest purse for literature in the country.

According to the prize's website, more than 2.5 million Giller-nominated books were sold in the first 10 years of the award, resulting in headlines about the so-called "Giller effect" on finalists.

"We learned a long time ago that authors are really interested in selling their books, that's how they make a living, so that's what we're trying to do — is help them make a living," said Rabinovitch, whose signature line at every Giller gala was: "For the price of a dinner in this town you can buy all the nominated books. So, eat at home and buy the books."

Beyond the spike in sales and the exposure, the Giller also gives authors the opportunity to break away from their typically isolated writing lives and dress up at the annual awards gala, where a who's who of the literary world and beyond come together for a night of fine dining and entertainment.

"I think it's amazing for books to get this kind of attention at an event like this. It's unparalleled," said Giller nominee Alix Ohlin at the October 2012 bash.

"It's a long way from working in your kitchen and making sure the cat's water dish is full, which is more like what writers deal with," quipped fellow nominee Russell Wangersky.

Rabinovitch's love of literature blossomed when he studied at McGill University and graduated with a B.A. in Honours English in 1952.

He then worked as a reporter and a speechwriter before entering the worlds of food retailing, distribution, and building and real estate development.

In 1986, he became executive vice-president of property development company Trizec Corporation and joined the board of the Princess Margaret Hospital. He was also on the Board of the MaRS (Medical and Related Science) Project.

Rabinovitch eventually became president of Nodel Investments Ltd., a real estate/venture capital firm, and became an officer of the Order of Canada in 2009.

Rabinovitch is survived by his three daughters — Noni, Daphna and Elana — and three grandchildren — Jacob, Saffi and Luca.

Members of the literary community took to Twitter Sunday afternoon to express condolences.

"It was an honour to work with Jack Rabinovitch," wrote Irish novelist John Boyne, author of The Boy In The Striped Pajamas and a member of the 2015 Giller jury. He called Rabinovitch "a gentleman, a book lover, and philanthropist."

"RIP Jack Rabinovitch," wrote fantasy writer and Order of Canada recipient Guy Gavriel Kay. "His creation of the Giller Prize was a major moment in CanLit culture, and his generosity was extreme. A real loss."

Former Ontario premier Bob Rae, a friend of Rabinovitch, also expressed his grief on Twitter. "Lost a dear friend, #JackRabinovitch, whose body succumbed to injuries suffered on Thursday, but whose spirit will live on in all of us."

"We will miss him!!!" Former governor general Adrienne Clarkson tweeted.

Scotiabank, which joined with Giller in 2005 issued a statement expressing its sadness at Rabinovitch's death.

"We remember Jack as a trailblazer, someone who sought to honour his late wife, literary journalist Doris Giller, and their love of Canadian literature, in founding the Giller Prize in 1994," John Doig, Scotiabank's Chief Marketing Officer, said in a statement.

The funeral will be held Wednesday.