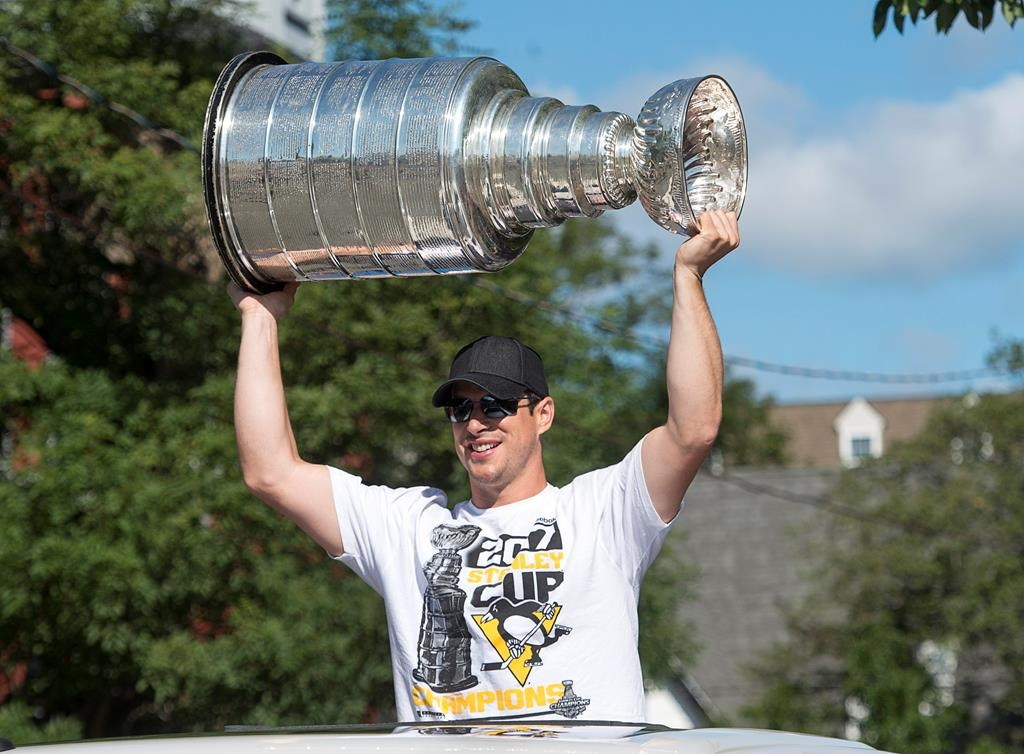 Pittsburgh Penguins star celebrates his 30th birthday on the streets of Halifax with the Stanley Cup on Aug. 7, 2017. Photo by The Canadian Press
Previous story

NHL superstar Sidney Crosby said it's "just a number," as he turned 30 on Monday and brandished the Stanley Cup in a parade that wound through Halifax in his native Nova Scotia.

Crosby rode on the back of a white pickup truck as marshal of the city's annual Natal Day parade, waving to thousands of fans who lined the streets for a glimpse of "Sid the Kid" and the revered cup.

Crosby told reporters he'd enjoy the celebrations before setting his sights on training camp with the Pittsburgh Penguins later this month. The team will be making a bid for its third straight championship.

"I have a pretty good understanding of how hard two is, so I don't imagine what three must be like. I'd love to find out," Crosby said.

"It's gonna be tough but we're going to training camp with that in mind so it'll be a big challenge but, you know, why not?"

The three-time Stanley Cup champ and future Hall of Famer said NHL hockey just keeps getting faster, "And I like that."

He smiled when asked if, at 30, he has any grey hairs yet.

"Lots," he said to laughter from the room. "Greys and whites."

Crosby, who is entering his 13th season in the league, said he fully realizes what the milestone age signifies for an athlete.

"It's amazing how fast time goes by," he said. "It makes you realize that it doesn't get any easier and that's why things like this (parade) — you have to enjoy it."

And while he doesn't plan to change his approach to playing the game yet, Crosby said there are certain realities that have to be considered.

"You have to understand that rest becomes a little more important. I've always kind of just adjusted and tried to evaluate things and I'll do the same."

Dressed in a ball cap, shorts and a white Penguins 2017 Stanley Cup T-shirt, a relaxed Crosby said having a few days with the cup never gets old.

Crosby took the cup to Halifax hospitals for children and veterans on Sunday, and said he celebrated with it that night with family and friends at his home in Enfield, N.S., outside of Halifax. Crosby declined to give details, saying with a grin reporters could probably "put two and two together."

"The best part about it is to see everyone's reaction (to the cup) regardless of whether they are a hockey fan or not," he said.

As Crosby made his way to a truck waiting to take him to the parade, he was surrounded by a group of young children from a local hockey camp. He bent down and showed them the cup.

People lining the parade route sang Happy Birthday as Crosby passed, behind a marching band at the front of the parade.

It began in Halifax's historic north end, and then across a harbour bridge to Dartmouth. Crosby rode on the back of a white pick up truck, waving to the crowd with one hand and steadying the large silver cup with the other.

The crowd cheered when the marching band played a rendition of Hockey Night in Canada.

"He's so good but he stays low key. He signs autographs."

"He's such a good player but he also takes the time to visit old folks' homes."

Sana Rehan said she became a Crosby fan after watching him play in the 2010 Winter Olympics.

"He's so good, on and off the ice. He's so humble and such a strong work ethic."

Rehan said her family has bonded over hockey and watching Crosby ever since, and Monday was the first time they saw the hockey star — and the Stanley Cup — in person.

"He's the best player in the world and we all became fans after that (Olympic) game."

Her 12-year-old brother Ahmad, who will play bantam hockey next year, said Crosby made him want to play hockey.

"He's got such skill. It makes you want to cheer for him."

Monday afternoon, Crosby was to take the cup to Rimouski, Que., where he played as a teenager in the Quebec Major Junior Hockey League.

He said although he has visited Rimouski since turning pro, it's the first time with the cup.

"That's a place where I have a lot of great memories and I'm sure people will be pretty happy to see it."