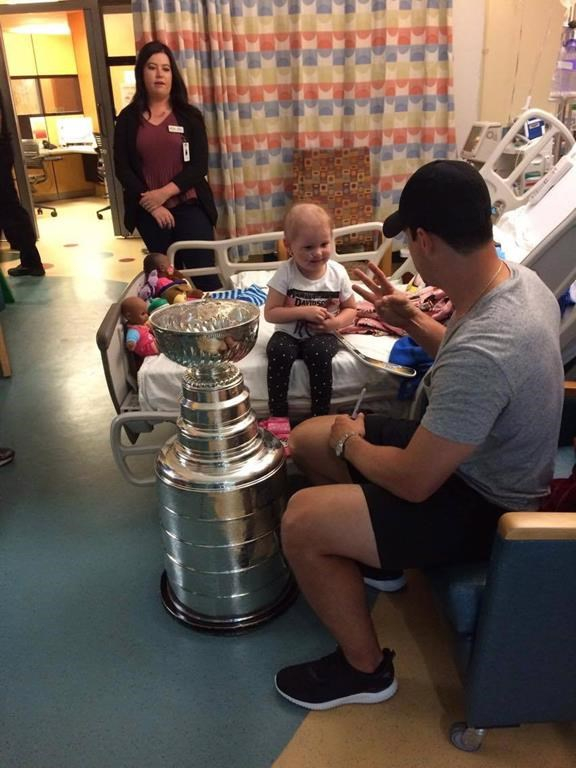 Sidney Crosby, right, visits with three-year-old Harper Saunders, who is being treated for leukemia, at a Halifax hospital in a Sunday, August 6, 2017, handout image.
Previous story

Sidney Crosby is welcoming the Stanley Cup to his native Nova Scotia for a third time.

Phil Pritchard, the Cup's keeper, tweeted a photo Saturday night of Crosby hoisting the trophy above his head beside an airplane in Halifax.

On Sunday, the Pittsburgh Penguins shared a photo of their captain placing a stuffed, pink kitten on the Cup's rim while making the rounds at a local children’s hospital.

Nick Cox, a spokesman for the IWK Health Centre, said he was among a handful of people at the hospital who knew about Sunday's special guest in advance.

"He's really there for the kids," Cox said in an interview. "It's tough being in the hospital, and I think Sidney recognizes that."

Cox said it was Crosby's third visit to the facility, and every time he brings the trophy, the kids "go through the roof."

He said Crosby spent about an hour and a half roaming from room to room, visiting with kids and families and taking photos with "Stanley."

"It's an experience they get to enjoy that they'll keep with them for a long time," Cox said. "Any time you can bring a smile to someone's face, it's a good day."

Crosby was also photographed at a veterans' retirement home, chatting with seniors and showing off professional hockey's most prestigious trophy.

The three-time Stanley Cup champion will celebrate his 30th birthday on Monday by parading the trophy through Halifax and Rimouski, Que.

Crosby has brought the Cup to his hometown of Cole Harbour, N.S., twice before, including in 2009 and last July, when he carried the trophy in the back of a pickup to a local arena as thousands of cheering fans looked on in the sweltering heat.