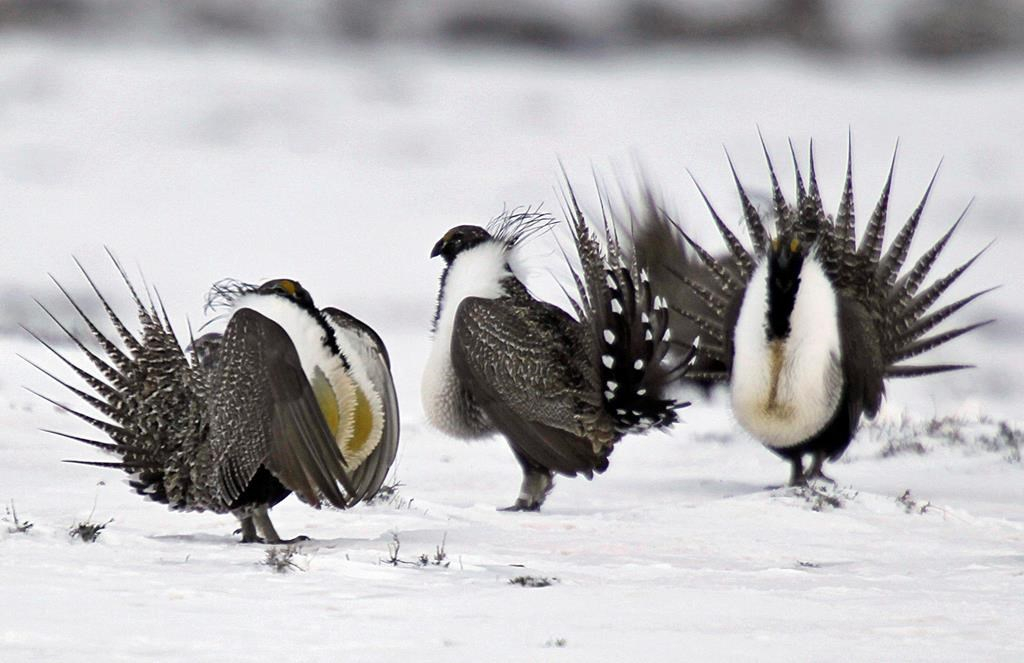 In this April 20, 2013 file photo, male greater sage grouse perform mating rituals for a female grouse, not pictured, on a lake outside Walden, Colo. File photo by the Associated Press/David Zalubowski
Previous story

President Donald Trump's administration has opened the door to industry-friendly changes to a sweeping plan imposed by his predecessor to protect a ground-dwelling bird across vast areas of the West.

Wildlife advocates warn that the proposed changes would undercut a hard-won struggle to protect the greater sage grouse.

Representatives of the ranching and energy industries cheered the policy shift as needed to give states flexibility.

It recognized for the first time the importance of livestock grazing on sage grouse habitat, said Jim Magagna, executive vice-president of the Wyoming Stock Growers Association.

It also backed away from requirements to keep rangeland grasses and shrubs at a prescribed minimum height, which ranchers had complained was arbitrary.

"I was very pleased with what I saw there in terms of the tone," Magagna said.

The ground-dwelling sage grouse has lengthy, pointed tail feathers and is known for the male's elaborate courtship display in which air sacs in the neck are inflated to make a popping sound.

Millions of sage grouse once populated the West but development, livestock grazing and an invasive grass that encourages wildfires has reduced the bird's population to fewer than 500,000.

Just how much Zinke intends to tinker with the plan that was years in the making remains to be seen.

It was hashed out under President Barack Obama and unveiled in 2015 as a solution to keeping the sage grouse off the endangered species list following a decade-long population decline caused by disease and pressure on the birds' habitat from energy development, grazing and wildfires.

The proposed changes, the result of a 60-day review of the plan by Zinke's agency, could give states wiggle room in areas such as setting population goals for sage grouse and drawing boundaries of recognized sage grouse habitat.

Advocacy groups such as The Wilderness Society and National Wildlife Federation said the proposal was a backdoor attempt to allow unfettered oil and gas development that ignored previous scientific studies showing that drilling too close to sage grouse breeding areas would harm the birds.

"Wholesale changes to the plans are not necessary and could derail years of hard work," National Wildlife Federation President Collin O'Mara said in a statement. "We cannot fall victim to the false dichotomy that pits wildlife conservation against the administration's energy development goals."

The birds inhabit parts of 11 states including large swaths of Wyoming, Utah, Idaho and Nevada — big ranching states that include areas with vast wind energy and gas drilling potential.

Wyoming has a larger number of greater sage grouse than any other state and keeping the bird off the endangered list remains a priority, Wyoming Gov. Matt Mead said.

"We've come a long ways to get to this point," Mead said. "As we make changes — and certainly I think there's room for improvement — we have to move cautiously because we don't want to get to the point where the bird is listed."

Wyoming officials are glad the Trump administration has been talking to them about sage grouse policy, and the proposed changes include improvements, Mead said.

Officials remain concerned, however, by how the administration wants to set population goals for sage grouse. The birds are difficult to count and their numbers can fluctuate significantly from year to year in response to weather patterns, Mead said.

"We want to move cautiously as to not disrupt the great work that has been done by so many over the many years," Mead said.

Idaho Gov. Butch Otter said Zinke's announcement marked an appropriate step toward giving the state more power to manage sage grouse. Idaho, along with Utah and Nevada, had filed a lawsuit challenging the Obama-era conservation plans for the birds.

"My staff and I stand ready to roll up our sleeves and work with the Department of the Interior to bring the federal plans into alignment with Idaho's science-based conservation plan," Otter said in a statement.

The proposed changes drew a muted reaction from some other Western governors who had been heavily involved in crafting conservation plans for the birds.

Sandoval, Mead and Hickenlooper met with Zinke in April and urged him to co-ordinate with states before changing the Obama-era plans.

Areas where sage grouse habitat and gas drilling overlap include the upper Green River Basin of western Wyoming, home of some of the biggest onshore natural gas fields in the U.S.

A third gas field, the Normally Pressured Lance field, could add another 3,500 wells in a 220-square-mile area. Drilling could begin next year if the U.S. Bureau of Land Management signs off.

"From our perspective, that definitely presents challenges but also provides an opportunity to do what we've done from day one, which is follow the science," he said.