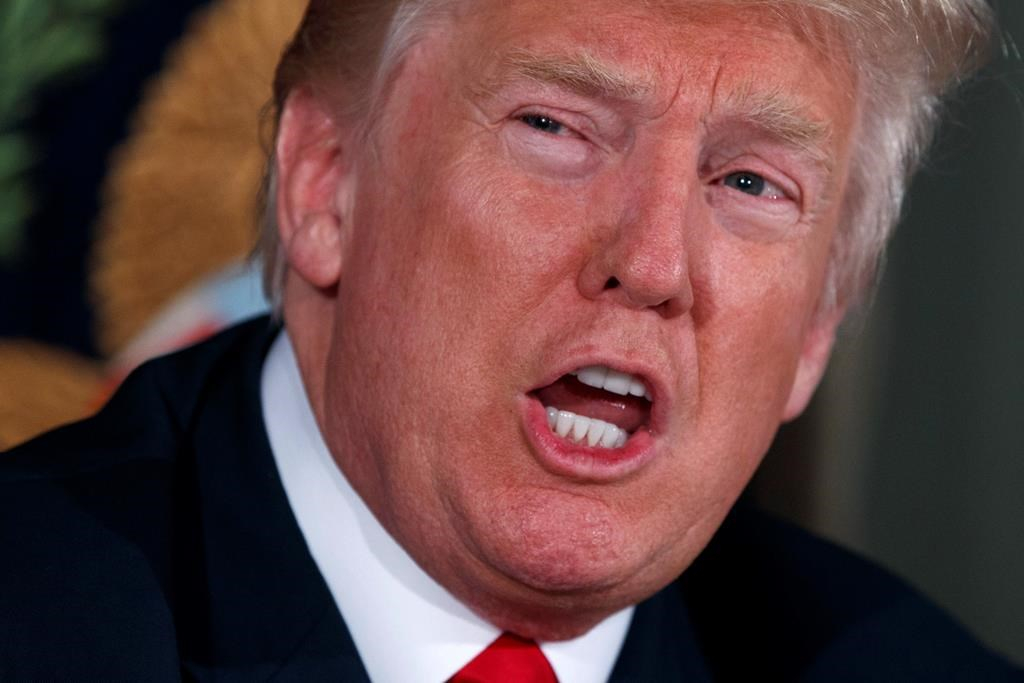 President Donald Trump talks about North Korea during a briefing on the opioid crisis, on Tuesday, Aug. 8, 2017, at Trump National Golf Club in Bedminster, N.J. Photo by The Associated Press/Evan Vucci
Previous story

With crossed arms and a cold stare, Donald Trump uttered the most threatening words of his presidency on Tuesday, warning of a strike of unprecedented "fire," "fury," and "power" against North Korea in an escalating, nuclear-themed standoff.

His warning was swiftly met with a counter-threat: A North Korean news agency announced that the government there was examining plans for attacking Guam to contain the island's U.S. bases.

It all unfolded following reports that North Korea had crossed a key threshold in becoming a full-fledged nuclear power — with an alleged new ability to mount a miniaturized nuclear warhead atop a long-range missile.

As this drama occurred, a Canadian delegation arrived in North Korea.

The national-security adviser to Prime Minister Justin Trudeau was there seeking the release of an imprisoned Canadian pastor. While the goal of Daniel Jean's Pyongyang trip was to assist Hyeon Soo Lim, a Canadian official added: "That doesn't preclude ... discussing other issues of regional concern."

That concern has escalated dramatically.

Trump stared at the assembled cameras and raised the stakes when a reporter asked about nuclear developments, during an unrelated meeting about the opioid crisis at the golf club where Trump is enjoying a 17-day holiday.

"North Korea best not make any more threats to the United States. They will be met with fire and fury like the world has never seen," Trump replied.

"(North Korea's leader) has been very threatening beyond a normal statement and, as I said, they will be met with fire, fury and, frankly, power the likes of which this world has never seen before."

North Korea sounded determined to test the president's threat by day's end with its threat over Guam.

The developments came as a jolt. Even the stock market appeared to freeze after a days-long rally, with a dip Tuesday afternoon.

People parsed the president's words to gauge their level of seriousness. Some noticed Trump had been casually repeating a similar turn of phrase all day. Of opioid deaths, he said: "It's a problem the likes of which we have never seen." On his southern border plan, Trump said: "The likes of which this country certainly has never seen."

He then applied the same language to a nuclear confrontation.

A North Korean defector and journalist predicted some of these developments several weeks ago in an email exchange with The Canadian Press. Writing through a translator, North Korea-raised, Seoul-based journalist Joo Sung-ha said the regime was very close to gaining nuclear-tipped intercontinental ballistic missiles.

Next it will use them as a bargaining chip, he predicted.

"It will seek to negotiate directly with the U.S.," wrote the journalist, now with South Korea's Dong-a Ilbo newspaper, predicting the demands it will make: "The goal of the regime is to receive a guarantee from the U.S. of full security of the regime’s own survival, a peace treaty and a large economic support package."

He said the North Korean regime would want tens of billions of dollars in economic aid — otherwise it could escalate the risk in two ways: threatening neighbours like South Korea and seeking to sell the technology to other hostile actors.

The president's words triggered a range of reactions — from scared, to serene.

Several people expressed fear the president's mouth might cause a catastrophe. Sen. John McCain said the danger of uttering such words is they push you into a corner, with only two options: back up the words with violence, or back down in embarrassment.

"I believe the president's comments and unnecessarily inflammatory (language) will increase the risk of escalation and conflict," said an email from Jon Wolfsthal, a nuclear expert who served as Obama's senior director for arms control and non-proliferation.

"Multiple U.S. presidents have worked to provide steady calm leadership to protect us and our allies. These statements risk making a dangerous situation into a full-blown crisis."

Another national-security aide to Obama, Tommy Vietor, tweeted: "The president of the United States shouldn't sound like Kim Jong-un. It antagonizes everyone while accomplishing nothing."

But some national-security experts downplayed the day's developments.

Tom Nichols, a professor at the Naval War College, said North Korea was a threat to its immediate neighbours, but was far from having a workable, intercontinental ballistic missile capable of hitting the U.S.: "Stop hyperventilating. Please," he tweeted.

John Noonan, a former nuclear-launch officer and adviser to Mitt Romney and Jeb Bush, said the president's language might actually prove useful as a deterrent: "Tough talk on North Korea might appal Ivy League, Bordeaux sippers. But this is the language much of the world speaks. And it is effective.

"Wars don't start because of inflammatory rhetoric. They start when aggressors believe the cost of violence is affordable."

"It is possible that North Korea has achieved the miniaturization of nuclear weapons and has developed nuclear warheads," Japan's Defence Ministry concluded in an annual white paper released Tuesday.

U.S. media, including The Washington Post, reported that U.S. intelligence officials assess that a decade after North Korea's first nuclear test explosion, Pyongyang has produced nuclear weapons for ballistic missile delivery, including by intercontinental missiles — the type capable of reaching the continental U.S.

The UN Security Council this weekend slapped its toughest sanctions yet on North Korea over its latest test of a ballistic missile that could be used to deliver a nuclear weapon. Despite the rapid tempo of these tests, uncertainty has lingered over the isolated nation's ability to couple such a missile with a nuclear device.

— With files by The Associated Press