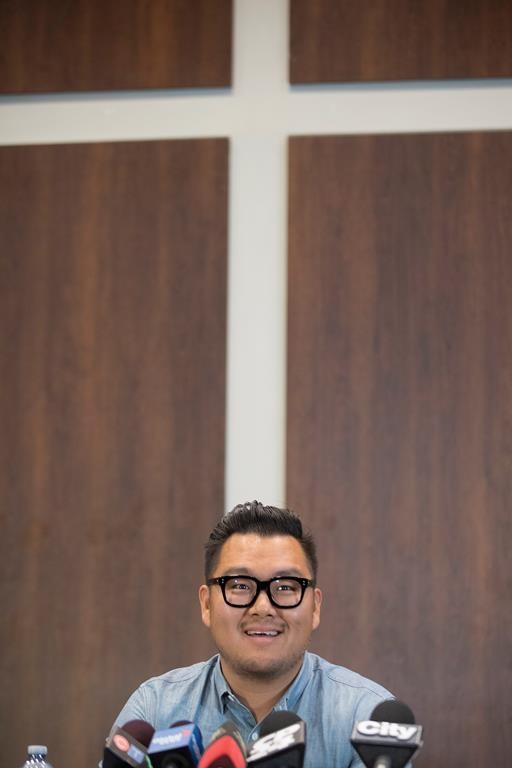 James Lim, the son of Rev. Hyeon Soo Lim, speaks to the media at the Light Presbyterian Church, in Mississauga, Ont., after his father's return home from a North Korean Prison on Saturday, August 12, 2017. Photo by The Canadian Press/Chris Young
Previous story

The son of a Canadian pastor who was imprisoned for more than two years in North Korea said that faith is what kept his father and their whole family going throughout the entire ordeal.

Hyeon Soo Lim was serving a life sentence of hard labour in North Korea for alleged anti-state activities, but was released last week on what the government described as "sick bail." His son, James Lim, said it was surreal to see him again after living in fear over what could happen.

"To know that Canada has stood by him, we are so grateful," said James, speaking at the Light Presbyterian Church in Mississauga, Ont., where Hyeon Soo serves as a pastor.

James said his father is currently resting at home, after he arrived on a Canadian government aircraft on Saturday morning. A video shows Hyeon Soo stepping out of the small jet aircraft and embracing his family.

"My mother was the first one who he was able to embrace, and just to witness that, you play in your head what it's going to be like, and it was far greater than anything we could have imagined," James said.

He added that his father is excited to come to the church's Sunday service Sunday and meet with the community after so long.

Hyeon Soo Lim was released from prison earlier in the week after a Canadian delegation — led by Daniel Jean, who serves as Prime Minister Justin Trudeau's national security and intelligence adviser — travelled to Pyongyang, North Korea.

He was on a humanitarian mission to assist with food security to the country's citizens, his son said. He also distributed diapers and eyeglasses, and brought along English teachers and optometrists on the trip.

Lisa Pak, a spokesperson for Hyeon Soo's family who also works with him at the church, said that he had been to North Korea more than 110 times on humanitarian missions, and wasn't sure what led to his arrest in 2015.

"As a Canadian, going to North Korea for him was to be able to share the blessing of Canada to those in North Korea," said James, saying that his father was a brave person to devote so much time to helping people in North Korean.

"There were a lot of calls, a lot of visits to Ottawa, a lot of back and forth between two different governments," James said. "It was definitely an ordeal."

The reunion was Hyeon Soo's first time seeing his granddaughter, who was born while he was imprisoned. James said his father is excited to celebrate her upcoming first birthday, and to eventually take her ice fishing, which is one of his favourite hobbies.

Family members said they couldn't comment on Hyeon Soo's health at the time of his arrival, and said that they are more focused on spending time with each other after he was isolated for so long.

"He was telling me that he had about 2,700 meals on his own," said James, saying that it was hard to imagine being in isolation for that long.

"Through those times, he's been able to spend time with God in solitude," he said. "I would say he made the best of it considering his circumstances."