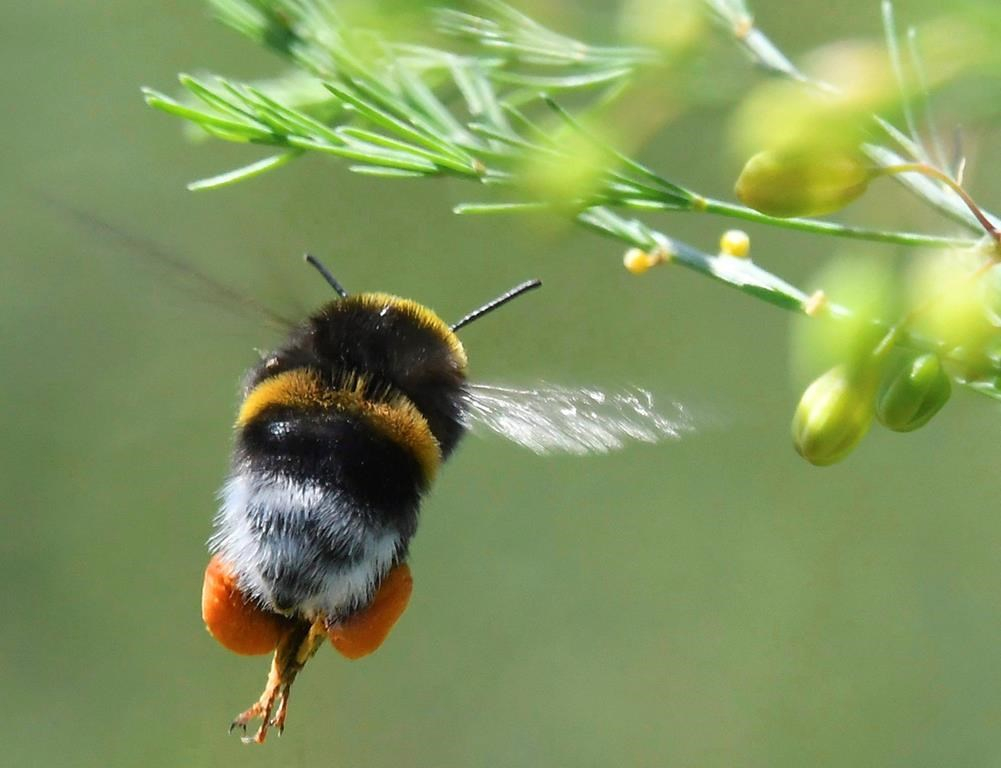 A bumblebee gathers pollen at an asparagus field near Diedersdorf, Germany in this June 19, 2017 photo. File photo by The Associated Press/Bernd Settnik
Previous story
Next story

A widely used pesticide is placing bumblebee populations at an increased risk of extinction, a new study from an Ontario researcher suggests.

Nigel Raine, an environmental science professor at the University of Guelph, discovered that thiamethoxam, a major neonicotinoid found in agricultural crops throughout the world, reduced the chances of bumblebee queens starting new colonies by more than a quarter.

The results were published Monday in the journal Nature Ecology & Evolution.

"Bumblebee queens that were exposed to the pesticide were 26 per cent less likely to lay eggs to start a colony," Raine said of the research conducted in his lab with researchers from Royal Holloway, University of London.

"It was a bigger impact than I was expecting. And our modelling suggests it could have a major impact on population persistence and increases the chances a population could go extinct."

Bees are crucial to agriculture. Published reports suggest about a third of the crops eaten by humans depend on insect pollination, with bees responsible for about 80 per cent of that figure.

But bee populations are declining worldwide as scientists try to figure out why. Research has suggested the use of neonicotinoids is among the factors contributing to the declines.

Ontario has taken the lead in North America by placing restrictions on the use of neonicotinoids, while Europe has imposed a moratorium on their use.

Recent research by York University showed neonicotinoids had spilled over from crops such as soy and corn in Ontario and Quebec into plants and wildflowers such as maple trees, dandelions and clover.

Raine wanted to examine the effects thiamethoxam and a common parasite had on the bumblebee queen's ability to set up a colony, a crucial part of a bee's life cycle.

Bumblebee queens, he explained, are quite different from honeybee queens in that they largely do all of the work themselves to start a colony, from foraging to nest building to raising their young before worker bees take over.

While there has been much study of the honeybee, not as much research has been conducted on the bumblebee, Raine said.

In his lab, Raine infected half the bumblebee queens he was studying with a parasite and then placed all the bees in a cold, dark room to force an artificial hibernation. Those that survived hibernation were then split into two more groups, one of which was exposed for two weeks to pesticide-laden pollen at "field realistic" levels found in the wild, he said.

Those queen bees were placed in different nest boxes and monitored for survival and signs of egg laying.

"There was very little effect of the parasite in our experiment," Raine said.

But he did find a substantial impact on egg laying.

"We are trying to link all this up to the broader ecology and life history of these organisms," Raine said.

He took that new data and plugged it into mathematical models to see what would happen over time.

"We're seeing a substantial increase of the likelihood of them not surviving over a longer period of time and that's obviously a serious concern with the current patterns of usage of these chemicals."

If anything, Raine said, his study is conservative, considering he only examined the effects of one pesticide and one parasite, whereas there are many other factors in the wild that play a role in the bumblebee's health, including disease and habitat destruction.