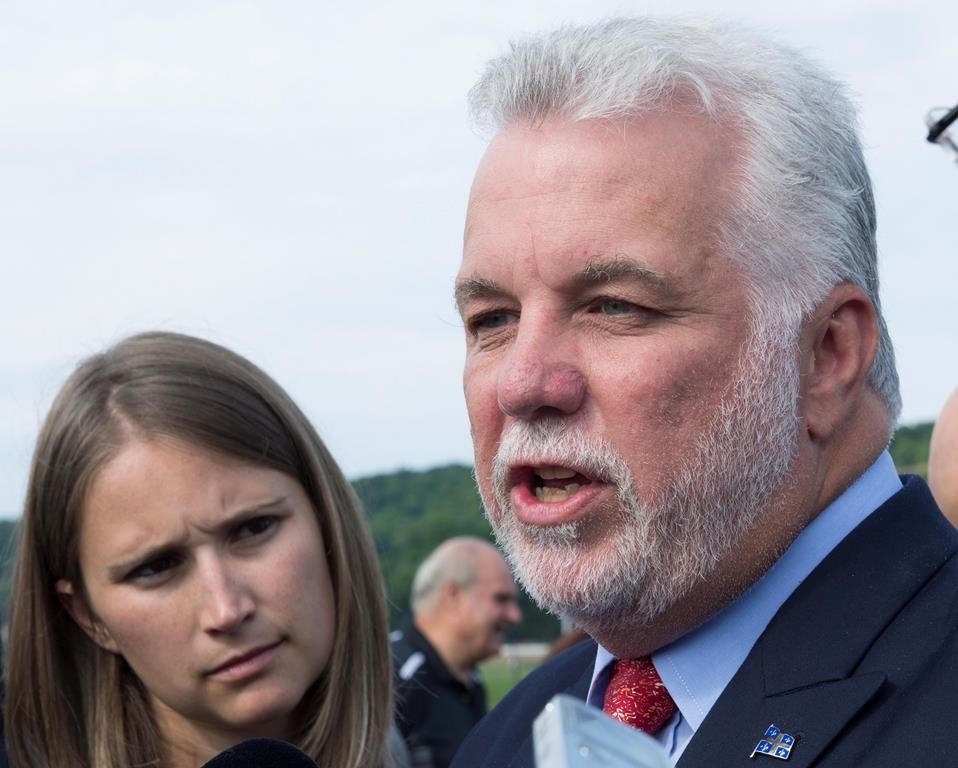 Quebec Premier Philippe Couillard told reporters in Quebec City on August 15, 2017 that he is concerned by the presence of anti-immigration banners but does not want to give right-wing groups undue attention. Photo by The Canadian Press
Previous story
Next story

The Parti Quebecois and Coalition for Quebec's Future are feeding "worry" and "prejudice" due to the parties' position that asylum seekers crossing into the country from the United States are "illegal."

Thousands of people seeking asylum have entered Quebec territory through illegal crossing points over the past several weeks, fuelling heated political debate in the province.

Various banners carrying the word #REMIGRATION were put up Monday, including one on an overpass on a busy thoroughfare in the provincial capital.

A right-wing group called La Meute is also organizing a demonstration on Sunday to denounce the attitudes of the federal and Quebec governments toward immigration.

"We are not being honest with Quebecers regarding the difference between an illegal immigrant and an asylum seeker," Couillard told reporters in Quebec City.

He said the mostly Haitian people who are crossing into Quebec are not illegal immigrants and cannot be sent back due to international agreements signed by Canada.

"That's why political leaders need to be very careful when they describe people as illegal when they are not," Couillard said. "When you make it seem as though we can solve the problem by snapping our fingers, we worry the population and we encourage this kind of thing."

Couillard said he is concerned by the presence of the anti-immigration banners but does not want to give right-wing groups undue attention.

He added such groups are part of society and that freedom of expression allows people to utter what he called stupidities.

The premier said his role and that of other people is to respond with measured comments that are based on compassion, wisdom and the truth.

"Unfortunately these groups are part of our society as in many other societies," he said. "This phenomenon exists everywhere and I won't give them more importance than they deserve."

The PQ and the Coalition have taken to social media for days to criticize how Ottawa and Quebec have handled the influx of asylum seekers.

Coalition Leader Francois Legault said Quebec's border "shouldn't leak like a sieve" and the Liberal party is "sending a very bad message to illegal migrants by opening up its arms (to them)."

Lisee tweeted Monday that Quebecers "are against the normalization of illegal crossings."