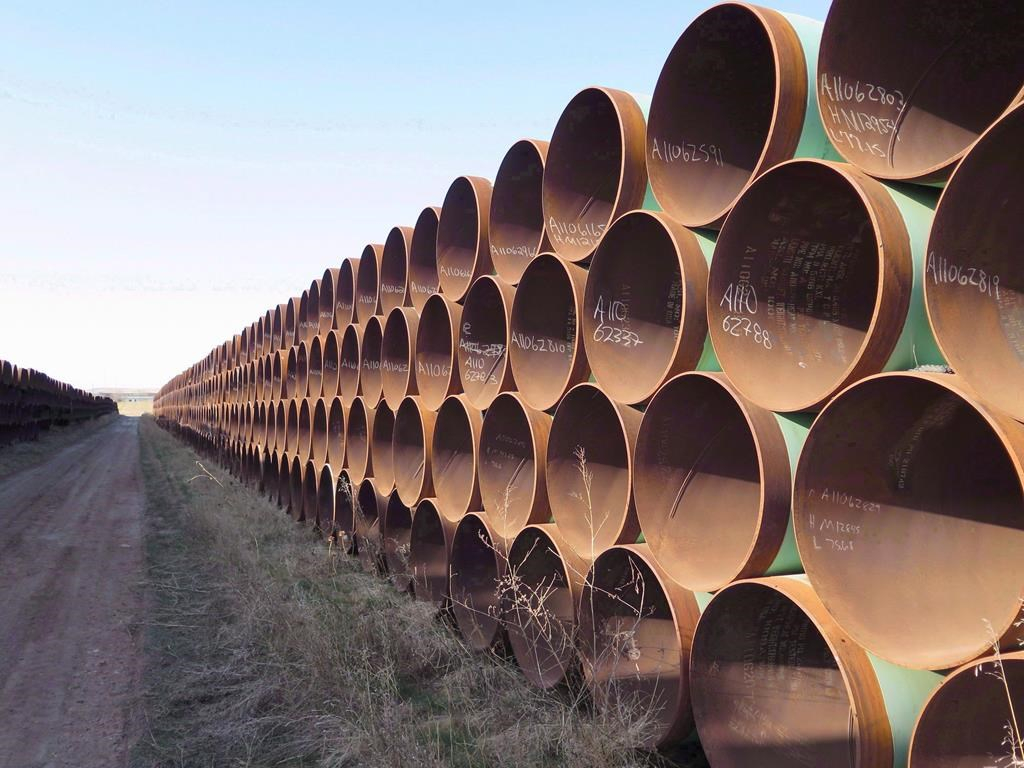 Hundreds of kilometres of pipes stacked inside a yard in Gascoyne, N.D., intended to go into the Keystone XL pipeline. File photo by The Canadian Press
Previous story
Next story

Natural Resources Minister Jim Carr defended on Tuesday his government's ability to get major resource projects moving, saying the government has approved a number of proposals and it's up to their proponents to get them built.

Carr was speaking at the end of a meeting of federal and provincial energy ministers in New Brunswick, where TransCanada's Energy East pipeline project was an unofficial topic of discussion.

It has been almost a year since the first round of National Energy Board hearings on Energy East collapsed after protesters shut down Montreal hearings and accused the panellists of bias in favour of the oil industry.

In January the board started the whole review process from scratch and appointed a new, three-member panel to conduct the hearings. New hearings haven't yet been scheduled as the NEB is still designing how the new hearing process will work.

Energy East is a 4,500-km pipeline to carry 1.1 million barrels of oil a day from Alberta and Saskatchewan to refineries in Montreal and New Brunswick. The project includes converting an existing natural gas pipeline to carry crude and building new segments of pipeline to complete the route.

Carr said the government has now provided certainty to the review process.

"We've given the NEB the resources it needs. We have appointed new commissioners. They're in their midst now, we'll wait until they make their recommendations. That's restoring confidence among Canadians that the process is working."

He denied that the government's requirement to balance the economics of oil and gas development with environmental protections and indigenous consultation was grinding things to a halt.

He said the government believes all of them are "good for Canada."

"We believe we made those decisions in the balance of interests for Canada," he said. "We stand by those decisions. It's now up to the proponents to determine the timing of construction and eventually what will flow through the infrastructure."

However three of the five projects he listed have either fallen apart or face significant hurdles.

Kinder Morgan's TransMountain pipeline expansion between Alberta and British Columbia was given the green light in the fall of 2016 and was supposed to start construction next month. However the new NDP government in B.C. moved last week to join legal challenges against the pipeline, after campaigning on a pledge to do whatever it took to stop the project.

Nebraska is currently holding hearings to determine if it will allow Keystone to proceed across its territory.

Battles over pipelines in Canada are largely at the provincial level. B.C. and Alberta are on opposite sides when it comes to the TransMountain project. Ontario and Quebec don't support the Energy East pipeline, which is backed by Alberta, Saskatchewan and New Brunswick.

New Brunswick Energy Minister Rick Doucet said Energy East was on his mind at the meeting and he raised it with a number of his provincial colleagues.

"This is a nation-builder. This pipeline is an opportunity for all of Canada and we all understand the importance of this project," said Doucet.