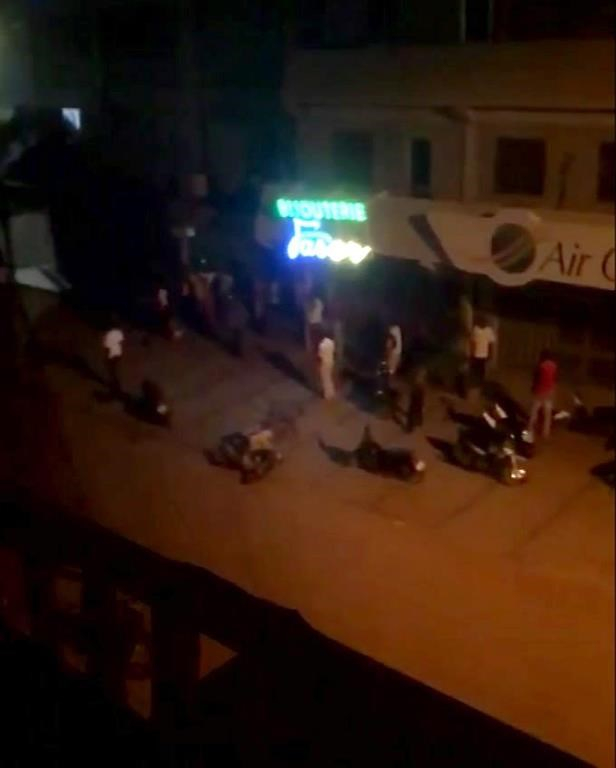 This image taken from video, early on Monday, Aug. 14, 2017, shows a top shot of a street near a Turkish restaurant that came under an attack in Ouagadougou. Photo by El Hadji Macky Diouf via AP
Previous story

The two Canadians killed in a suspected terrorist attack in Burkina Faso have been identified as Tammy Chen of Ontario and Bilel Diffalah, a volunteer for a Quebec-based anti poverty group.

The incident happened late Sunday when suspected Islamic terrorists opened fire at a Turkish restaurant in the country's capital, killing 18 people in all.

Foreign Affairs Minister Chrystia Freeland had confirmed the deaths of the two Canadians earlier in the day.

"It is with very great sorrow that I can confirm the deaths of two Canadians in yesterday's attack in Burkina Faso," Freeland said.

"The heartfelt condolences of our government go out to the loved ones of those targeted and the victims of this tragic attack. Canadian consular officials are working hard to provide assistance to their loved ones."

The Toronto District School Board called Chen "the victim of a senseless act of violence" and said in a statement that she left in 2013 to pursue her PhD at the University of Cambridge.

"Tammy is being remembered as a very passionate, charismatic and diligent teacher by her colleagues," the board said, adding "she was always willing to go the extra mile to help students."

Chen holds degrees from McGill University and Queen's University and was the president and co-founder of a Canadian NGO called Bright Futures Burkina Faso.

Montreal-based non-governmental organization CECI said Diffalah volunteered with the NGO as an adviser for hygiene and biosecurity.

"CECI would like to express its most deepest condolences to the family and friends of the volunteer, Bilel Diffalah," CECI's Odette McCarthy said Monday in a statement.

CECI has been operating in Burkina Faso since 1985.

Local authorities say other foreigners killed include two Kuwaitis and one person each from France, Senegal, Nigeria, Lebanon and Turkey.

Several Burkina Faso citizens were also killed and authorities said other victims had not yet been identified.

There was no immediate claim of responsibility for the violence, which continued into the early hours Monday.

The assailants arrived at the restaurant on motorcycles and then began shooting randomly at the crowds dining Sunday evening, he said. Security forces arrived at the scene with armoured vehicles after reports of shots fired near Aziz Istanbul.

The attack brought back painful memories of the January 2016 attack at another cafe that left 30 people dead.

Burkina Faso, a landlocked nation in West Africa, is one of the poorest countries in the world. It shares a northern border with Mali, which has long battled Islamic extremists.