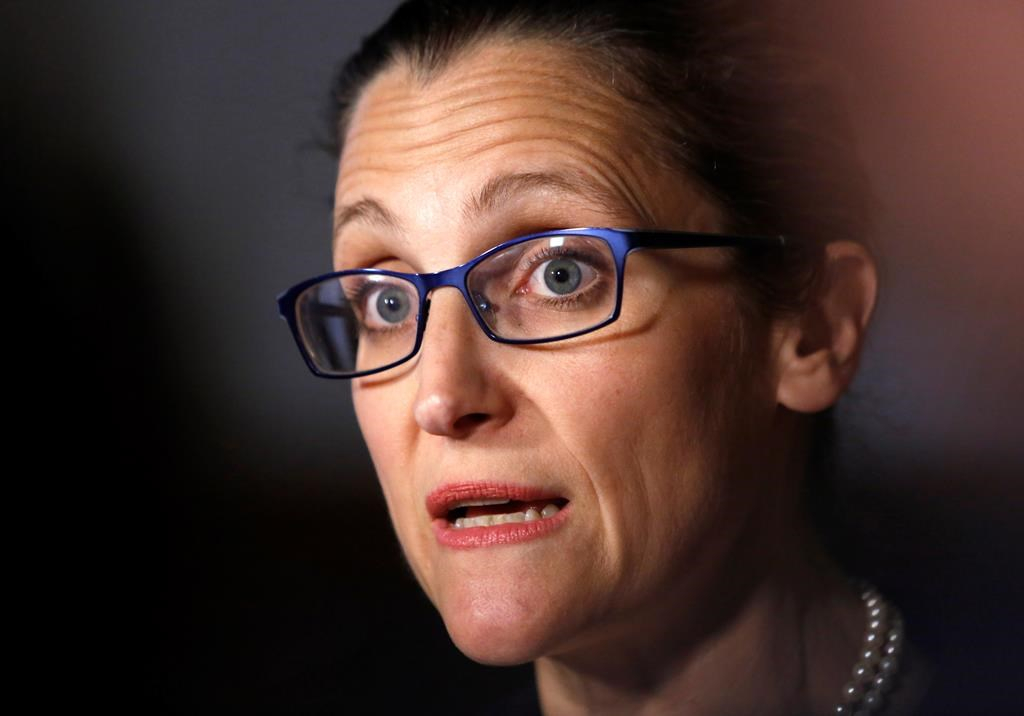 Foreign Affairs Minister Chrystia Freeland has said she is confident that NAFTA renegotiations will ultimately end well for Canada. File photo by The Canadian Press
Previous story
Next story

As NAFTA 2.0 negotiations begin, an old trade issue with a strange name has emerged to create unlikely allies across the political spectrum and staunch defenders in the oilpatch.

The "proportionality clause" originally appeared in the Canada−U.S. Free Trade Agreement of 1988 and became a major issue in that year’s federal election that returned Prime Minister Brian Mulroney to office. It was replicated six years later in the North American Free Trade Agreement (although Mexico won an exemption).

The clause can be invoked if a government in Canada reduces U.S. access to Canadian oil, natural gas, coal, electricity and refined petroleum products without a corresponding reduction in domestic access to those products — in other words, the ratio of energy exports versus supply must remain consistent, or proportional.

The left−leaning Council of Canadians says the clause erodes sovereignty and gives the U.S. too much control over Canadian energy production.

The business−friendly Conference Board of Canada says the clause is an outdated restriction that isn’t needed in today’s energy−rich world and should be cast aside.

"What happened with NAFTA is that Canadian oil and gas became North American oil and gas and we have very little control of it," said Maude Barlow, honorary chair of the Council of Canadians, in an interview.

"We feel very strongly this is a chance to reopen what should never have been signed in the first place."

She said the proportionality clause could allow the U.S. to prevent Canada from choking back oilsands production to meet its international environmental commitments, for instance, or to interfere if Canada tries to keep more oil and gas for domestic use during an energy shortage.

Michael Burt, a director with the Conference Board, said the clause isn’t fair because it doesn’t cover Mexico, whose energy industry is being opened to private investment after decades of government ownership.

"Evidence would suggest that it hasn’t really been a binding constraint at any point in the 25 years of NAFTA," he added. "It’s not really adding any value and it’s taking away potential future flexibility in terms of policy responses, whether it’s to a crisis or to climate change mediation."

While the Canadian think−tanks oppose the clause in submissions to the federal government, the energy industry itself prefers it to an alternative that could include government meddling in energy markets.

"It was put in there basically as a ’good neighbour’ clause," said Nick Schultz, vice−president and general counsel at the Canadian Association of Petroleum Producers, who was involved in free trade negotiations in the 1980s as an Ottawa trade lawyer.

"It’s not the evil thing that people have long tried to characterize it as. It’s simply saying ... treat your customers fairly."

He said the clause was created following global oil supply crises in the 1970s and the imposition of the National Energy Program in Canada in 1980. The NEP aimed to promote Canadian energy security by favouring domestic over export markets but was blamed for throwing Canada’s energy industry into a deep downturn.

Schultz pointed out that proportionality protects energy consumers on both sides of the border — as more U.S. oil products and natural gas replace western Canadian and offshore supplies in Eastern Canada, it will protect Canadian importers from arbitrary U.S. export cuts.

In U.S. President Donald Trump’s list of objectives for the NAFTA talks released in July, there’s no mention of proportionality. The one paragraph on energy policy lists general goals, including North American energy security and strong markets.

The clause is receiving very little attention in the U.S., said Robert Holleyman, the CEO of trade consulting firm C&M International and a former U.S. trade negotiator in the Obama administration.

But that doesn’t mean it’s not important, he said.

"It ensures a certain level of North American market security because it ensures that U.S. dependence and reliance on Canada to supply some of our energy needs is largely predictable," he said. "I suspect the U.S. will not want to give this up."

He said if Canada wants to drop the clause, it would likely have to offer substantial trade−offs in negotiations. The clause seems to be working and, therefore, should probably not be removed, he added.

Canada’s position on proportionality is unclear. It wasn’t one of the priorities mentioned by Foreign Affairs Minister Chrystia Freeland in a statement Monday. Her office did not immediately respond to a request Tuesday to clarify Canada’s stance.