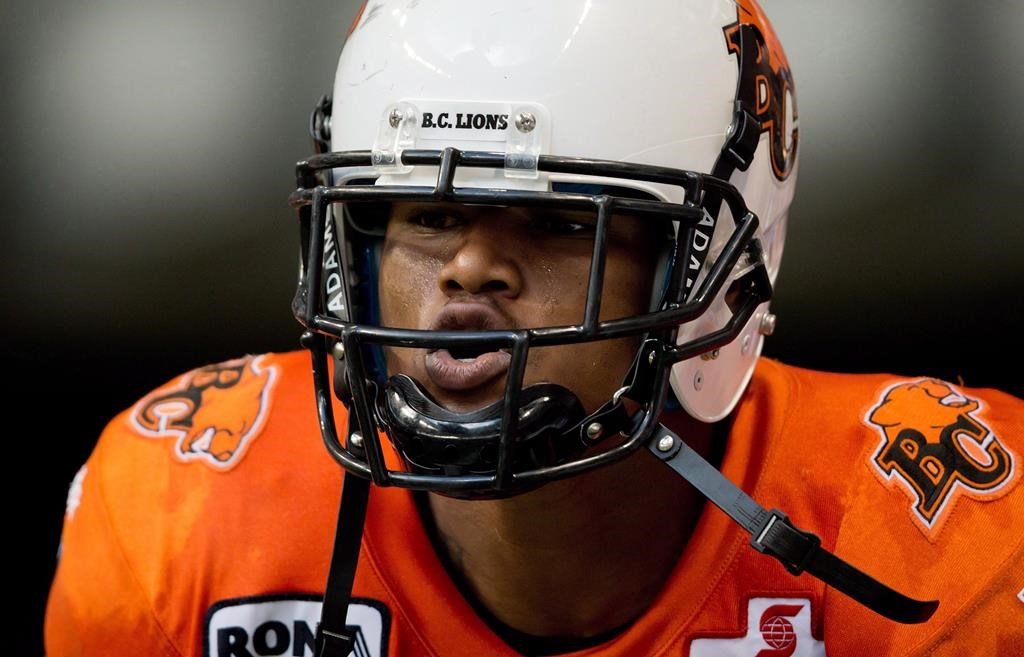 B.C. Lions' Arland Bruce celebrates his touchdown against the Saskatchewan Roughriders during the second half of a CFL football game in Vancouver, B.C., on Sunday August 19, 2012. File photo by The Canadian Press/Darryl Dyck
Previous story
Next story

A former Canadian Football League star receiver who says he sustained "permanent and disabling" repetitive head trauma as a player has asked the Supreme Court of Canada to allow his lawsuit against the league to proceed.

Arland Bruce III says in court documents that he continues to suffer post-concussive symptoms, including depression, paranoia, delusions and other medical issues. He played for 13 years with several CFL teams.

Two lower courts in British Columbia have dismissed the suit because Canada's top court has previously ruled that unionized employees must use labour arbitration — not the courts — to resolve disputes that arise from their collective agreement.

Bruce's lawyers filed leave to appeal to the high court last Friday. In court documents, they argue the CFL collective agreement is unusual because athletes individually negotiate their pay, have no long-term disability insurance plan, are excluded from occupational health and safety regulations and are not entitled to workers compensation.

"We have a gap of injured workers who are vulnerable ... now falling through the cracks," said Robyn Wishart, a lawyer for Bruce, in an interview on Wednesday.

The CFL said in a statement it cannot comment because the matter is before the courts. The league has 30 days to file a response.

Bruce's first CFL game was in 2001 for the Winnipeg Blue Bombers and he finished his career in 2014 as a member of the Montreal Alouettes. He played for teams across Canada including for the Toronto Argonauts, Hamilton Tiger-Cats and B.C. Lions.

None of the allegations filed with the Supreme Court of Canada have been proven.

Bruce's lawyers allege in the documents that he suffers from symptoms associated with chronic traumatic encephalopathy (CTE), a degenerative disease linked to repeated blows to the head.

Despite displaying the ongoing effects of concussions, Bruce was led to believe by the CFL that the link between repetitive brain trauma and CTE was unproven, his lawyers allege.

In 2011, the league circulated a one-page concussion flyer to 750,000 Canadian coaches, athletes and parents that purported to contain all the "important information" one needed to know and downplayed the dangers, the documents allege.

The campaign omitted preventative measures that are critical to avoiding repetitive brain trauma, the documents allege, including the "three strikes, you're out" principle that says athletes who suffer three concussions in a season must sit out for the rest of the season.

The court documents allege that in September 2012, Bruce was knocked unconscious for several minutes after an in-game collision, but he returned to active play 42 days later, relying on information from the CFL's concussion-awareness campaign.

Bruce's lawyers argue that Canada is at a crossroads when it comes to addressing risks associated with contact sports and concussion injuries. Parents need to understand what long-term risks their children will face by pursuing a career in professional sports, they say.

The B.C. Supreme Court struck down Bruce's lawsuit in March 2016 and the province's Court of Appeal upheld that ruling earlier this year. Both cited the Supreme Court of Canada ruling known as the Weber decision, which gave exclusive jurisdiction to labour arbitration over disputes involving unionized employees.

Wishart said the top court now has an opportunity to rule whether the Weber decision should apply to professional athletes who are not covered by occupational health and safety regulations and workers' compensation.

The National Football League in the United States was also sued by former players who suffered concussions and other head injuries. The NFL settled for $1 billion, and the first two claims under the settlement were announced in June, for a total of $9-million in benefits.