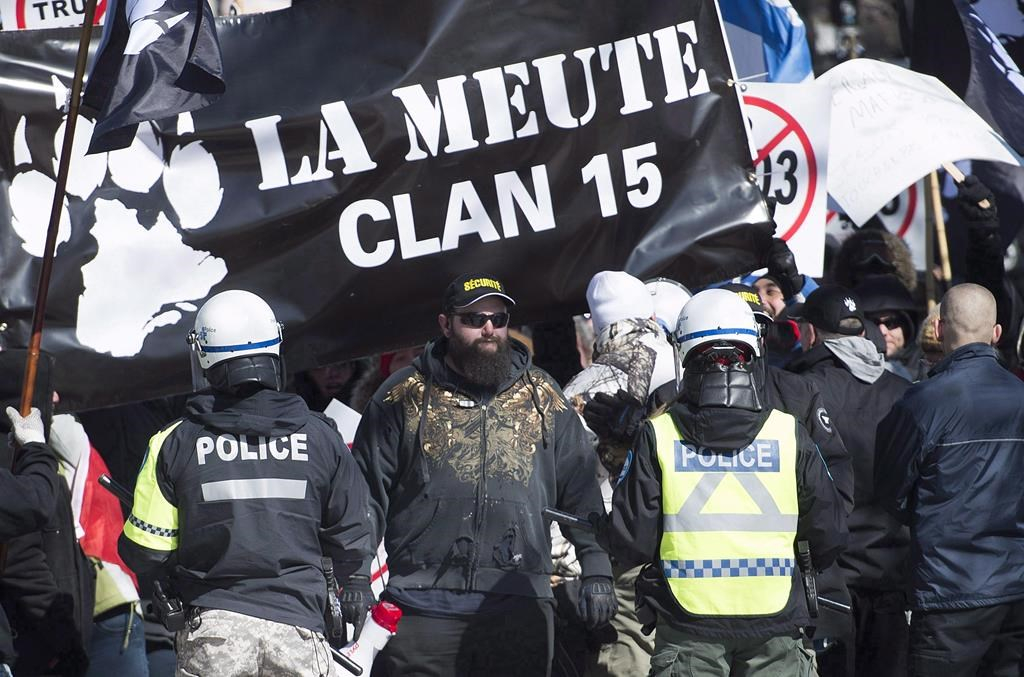 Police hold back far-right protesters during a demonstration in Montreal on March 4, 2017. Photo by The Canadian Press
Previous story
Next story

Duelling weekend protests pitting pro-refugee groups against those opposed to "illegal immigration" have Quebec's premier worried things might get out of hand.

"We (must) always remember all forms of extremism feed off one another, so we have to be very careful about what we say, how we say things," Philippe Couillard said Friday.

Right-wing group La Meute is organizing a rally in a yet-to-be determined location in Quebec City against the flow of illegal entries into the province from the United States.

It accuses the federal and provincial government of "improvisation."

The group says the event is "to protest the policies of the Trudeau and Couillard governments in the face of the scourge of illegal immigration and in support of RCMP officers who are not given the necessary resources to do their job effectively to ensure the security of our nation."

Meanwhile, an anti-fascist group is organizing a counter-protest against that demonstration.

Montreal Antifasciste said in a statement it's calling on anti-fascist and anti-racist organizations to head to the provincial capital to oppose La Meute.

Although the location of the protests has not been made public, Quebec City police said they have been advised and are prepared.

Spokesman David Poitras said that while protesting is a constitutional right, authorities won't tolerate violence, vandalism or other criminal acts.

"We've got hundreds of demonstrations each year in Quebec City and most of them are really peaceful," Poitras said. "We hope this one on Sunday is going to be the same as every other demonstration."

The call for a counter-protest comes after at least two Quebecers were identified participating in a white supremacist rally last week in Charlottesville, Va.

One of them, outed as a member of La Meute, was suspended from the group pending an investigation.

Couillard, meanwhile, said the provincial government's approach to the influx of asylum seekers is still driven by the same values — compassion, equity and strict application of the rule of law.

"The trajectory to become a refugee in Canada is not easy, far from guaranteed," Couillard said. "It's important that people know what they're walking into if they choose that path."