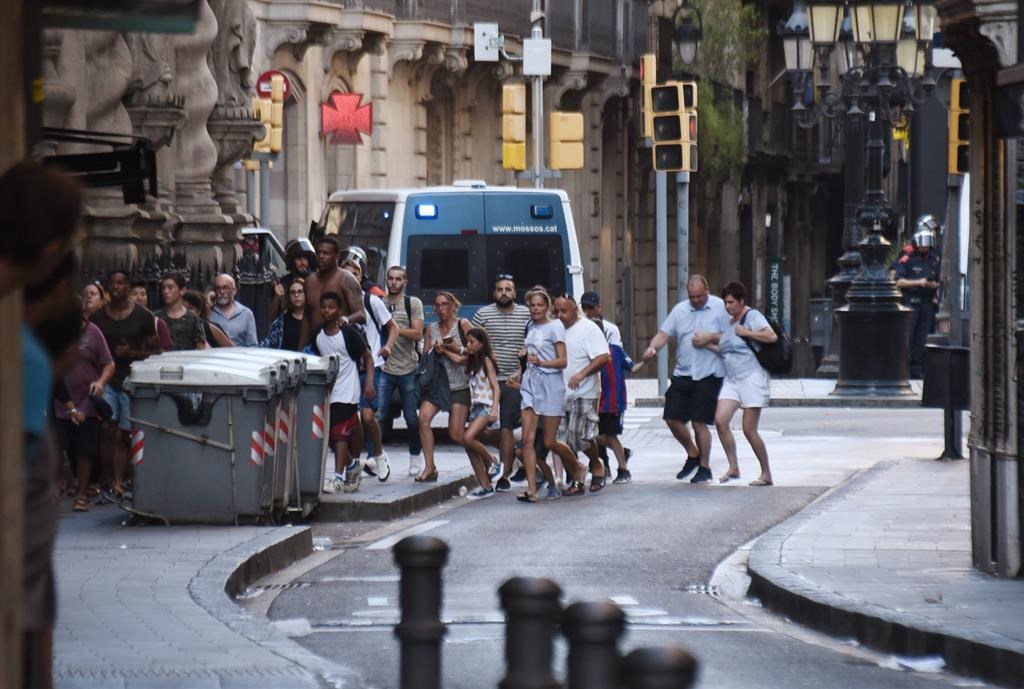 People flee from the scene after a white van jumped the sidewalk in the historic Las Ramblas district of Barcelona, Spain, crashing into a summer crowd of residents and tourists on Thursday, Aug. 17, 2017. Photo by The Associated Press/Giannis Papanikos
Previous story

Allan Gray was in a Barcelona restaurant with his family for barely a minute when they heard a loud crash and saw crowds of panicked people rushing to the back of the building.

Amid the commotion, the Mississauga, Ont., man ran with his wife and two daughters into an adjoining hotel where they huddled on an upper floor for the next five hours, flinching at the sound of gunshots and wondering whether movements in the stairwells were people trying to find safety or a potential terrorist about to launch another attack.

The Canadian family was among dozens who took cover in buildings along Barcelona’s popular Las Ramblas strip on Thursday after an alleged terrorist drove a van into a crowd on the promenade, killing at least 13 people and injuring more than a hundred.

Spanish authorities have said Canada is among 34 countries with citizens killed or injured in the Barcelona attack and a second attack Thursday in the resort town of Cambrils, south of Barcelona, that left one woman dead.

Global Affairs has said Canadians have been "affected" by the attacks, but didn’t provide further details, citing privacy concerns.

Gray, 50, said that the scariest part of the entire ordeal was not knowing what was going on.

"Everybody was panicking ... we just didn’t know what was going to happen," Gray told the Canadian Press in an interview Friday. "Every little movement, every little bang was just horrific"

People weren’t sure whether gunshots heard were coming inside the building, and were terrified that there might be a shooter in the hotel, Gray said.

His daughter, Daniela Gray, said that she was preparing for the worst

As the hours passed, the Gray family learned more about what was actually happening through social media.

At one point, Allan Gray said he looked outside the hotel’s window to see what was going on and got a view of the aftermath of the attack.

"There was a woman on the ground that was hurt, another person’s legs not moving, and a little boy who was lifeless on the ground," he said. "It was horrific."

The family of four took shelter in the hotel until a police officer escorted them out of the area to safety.

Gray said they’re still reeling from the events a day after the attack, and described an empty feeling to Barcelona’s previously jubilant streets.

"The party’s basically been shut down," he said. "It just seemed quiet out there and in a sombre mood."

Global Affairs spokesman Austin Jean said the government has been in contact with family members of Canadians affected by the attacks and is trying to gather more information. The department urged Canadians in Spain to let their loved ones know they are safe.

Spanish authorities said the back−to−back vehicle attacks — as well as an explosion earlier this week in a house elsewhere in Catalonia — were related and the work of a large terrorist group.

Anca Gurzu, a Canadian from Ottawa, was in a nearby neighbourhood when the Barcelona attack took place, but only realized what was going on after receiving a frantic call from a friend.

"(The police) were just everywhere, they were walking with their guns, and it was a bit surreal," said Gurzu, who went to the scene of the attack about two hours after it took place to see what was going on.

She said the residents of Barcelona remained "defiant" in the face of the violence, and that thousands of mourners gathered in the city’s main square on Friday to observe a minute of silence and march through the city’s streets.

People laid candles on the street beside bloodstains on the pavement where victims had been hit, she said.

Outside the main strip where the attacks occurred, Gurzu said the city’s residents are making an effort to try and go about their lives normally.

"People are trying to just move on."

Update: Canada on list of countries with citizens killed or injured in Barcelona