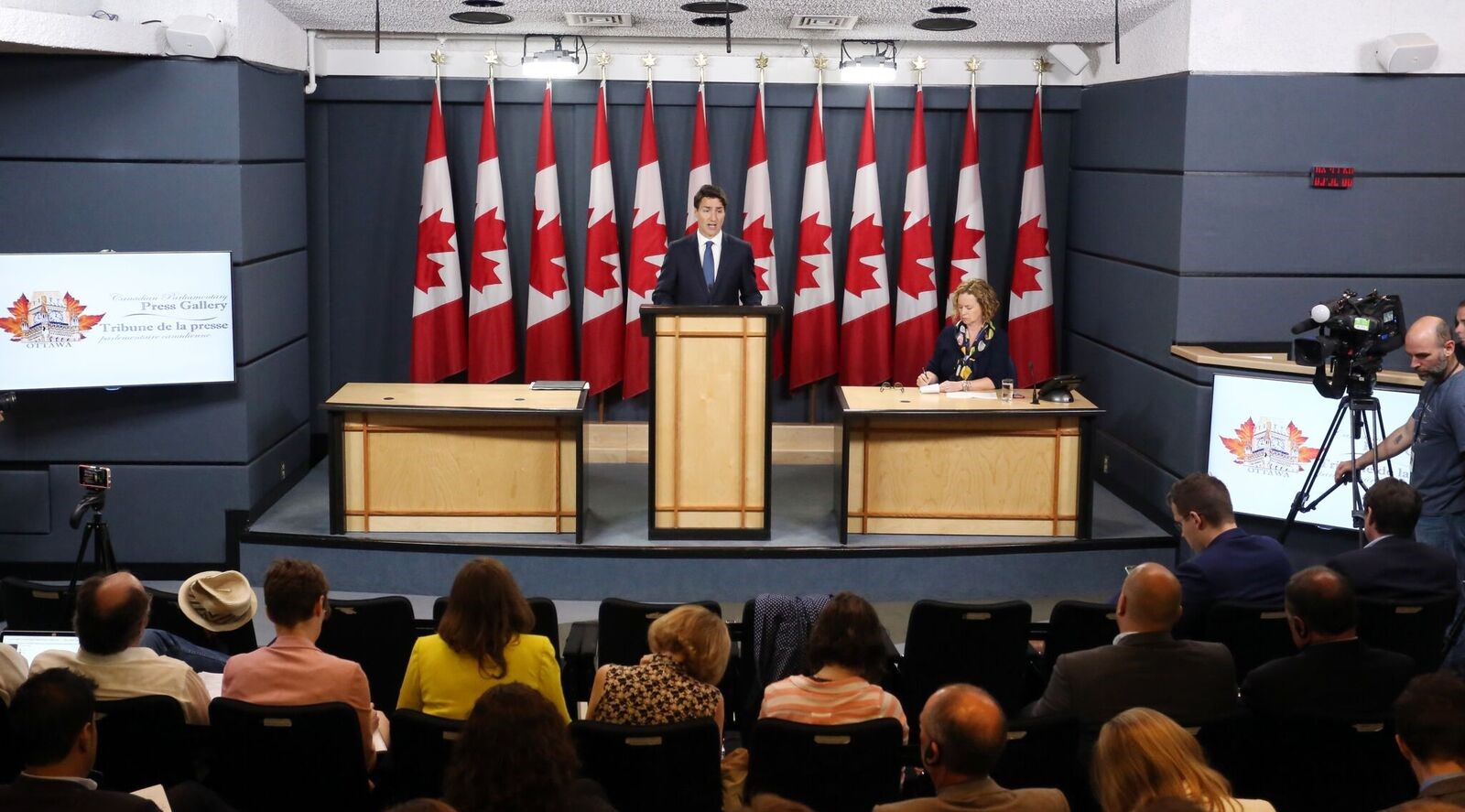 Prime Minister Justin Trudeau takes questions from reporters at the National Press Theatre in Ottawa on June 27, 2017. Like NDP Leader Thomas Mulcair, Trudeau does not do interviews with Rebel Media. File photo by Andrew Meade
Previous story
Next story

Andrew Scheer is not the only national party leader refusing to do interviews with Rebel Media.

After a week of conservative politicians distancing themselves from the right-wing website, following its controversial coverage of violent white supremacist protests in Charlottesville, Virginia last weekend, National Observer reached out to both the prime minister's office and the federal NDP to find out how other party leaders approach Rebel.

On Wednesday, Scheer, the new Conservative Party leader, joined a chorus of conservatives and former Rebel contributors in critiquing the website's "editorial direction." Though he has appeared on the site in the past, Scheer said he would "not grant interviews to the outlet."

In a written statement, spokesman Cameron Ahmad said Prime Minister Justin Trudeau had never before done an interview with Rebel, and, "neither he, nor our office, intend to."

"Their coverage and behaviour have been wrong and inappropriate," Ahmad said. "I leave it to other politicians who have chosen to engage with the Rebel to explain what motivated them to do so."

This week, the advocacy organization Leadnow called on Scheer to cut all ties, and ask his caucus members not to appear on the website either.

In a phone interview, Ahmad said there is no Liberal Party policy governing whether MPs can or can't do interviews.

"I can't speak on behalf of every individual MP, they decide on their own what kind of interviews they wish to do," Ahmad said. "There is no policy that says you are allowed or not allowed to do an interview with any type of outlet. They all make their own decisions, they have the freedom and the wherewithal about who they do and do not do interviews with."

Trudeau has previously imposed a ban on interviews because of a Rebel Media personality.

In 2014, one of Rebel Media's founders, Ezra Levant, was working for Sun News. The television network, at that time, was part of the Quebecor media empire, including daily newspapers across the country. But Trudeau announced in September 2014 that he was banning interviews with all Sun Media outlets because of an "offensive" attack on his family broadcast by Levant.

This Trudeau ban on interviews with the news chain ended a few days later after Sun Media apologized for Levant's on-air rant, admitting that it was "in poor taste and should not have been aired."

Levant and other Sun News personalities formed The Rebel in February 2015 when the Sun News television station shut down.

"It is possible that Rebel reporters have attended media availabilities that we've had, but Mr. Mulcair's never done an interview with them, and he does not intend to, even if there's a change in the editorial direction of the Rebel," Smith said.

Smith said the NDP does not have a "top-down policy directed by the leader" preventing NDP MPs from speaking to the Rebel, but that is also not necessary.

"I can't recall a time that we have received any requests to appear on Rebel, but ... my recommendation would, and this is not just because of recent events, but because of who Rebel are and how they conduct themselves, would be to never appear on that news organization," he said.

Anti-racism rallies expected to take place in days ahead

In the last week, there have been news reports of people rallying in Toronto, Montreal, Quebec City, and Halifax in solidarity with Charlottesville anti-racism protesters, one of whom — Heather Heyer — was killed last Saturday.

According to event notices posted on Facebook, an anti-racism protest is scheduled to take place outside the U.S. Embassy in Ottawa on Tuesday, and a number of rallies and vigils are planned or have already taken place in the United States.

Quebec City is expected to see both anti-racist and anti-immigrant protests squaring off on the weekend, while anti-racism protesters are reported to be planning to converge in Vancouver on Saturday, too.

Leaders' offices were asked whether Scheer, Mulcair, or Trudeau would be attending any anti-racism events in the week ahead.

A spokesman for Scheer, Jake Enwright, said the Conservative leader would not be in Ottawa next week.

"I'm not in a position to comment any further on his schedule," Enwright said Thursday.

Scheer announced plans earlier this summer to go on a cross-country barbecue circuit, aimed at introducing himself to Canadians and getting the party ready for a 2019 federal election.

Smith said Mulcair also would not be in Ottawa, but he would be attending Pride events in Montreal on the weekend, "which has always really been an anti-hate rally and movement as such."

Ahmad said Trudeau would also be participating in Montreal's Pride events, but could not speak to the rest of the week's schedule.