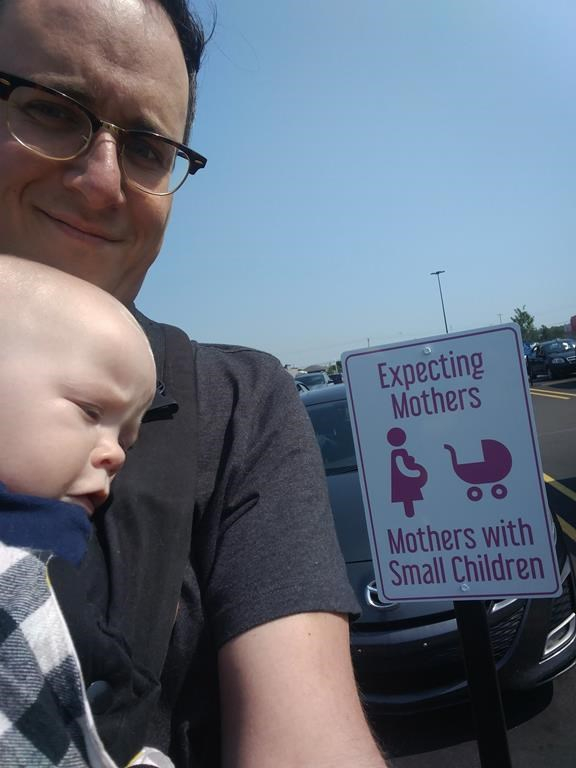 A father who was irked at a parking spot for new mothers at a P.E.I. grocery store has successfully prodded Sobeys to include new dads too.

On Monday, Justin Simard was on his way to drop off his nine-month-old son Charlie at his aunt's when he stopped at the Sobeys in Stratford to pick up some baby food.

"I pulled into Sobeys and I saw they had new parent parking, which my wife and I have used many times in the past, and when I was getting out of the car there was a woman getting her children out of her car... and she gave me a really dirty look," he said.

"I was confused, and I pulled my son out of the car and suddenly her whole demeanour changed and everything was fine ... Then I looked over at the sign and saw that this isn't new parent parking, it's new mother parking."

Simard said he tweeted a photo of himself holding his baby in front of the sign that said "Expecting Mothers; Mothers with Small Children," and asked Sobeys: "... am I allowed to park here? #notababysitter #dadissues."

About an hour later, Sobeys tweeted back at Simard, saying he is most definitely entitled to the parking spot and indicated it would be updating its signage at the store in Stratford.

In an email to The Canadian Press Tuesday, a spokesperson for Sobeys thanked Simard for bringing the issue to the company's attention.

"All expectant mothers and parents of small children are welcome to park in the expectant parents parking spots in all our Sobeys stores," spokesperson Katie MacNevin said in the email.

"As we are still looking into this, we do not have signage to share yet and we cannot comment on whether we will be updating signage right away in all our stores company-wide."

Simard, a 38-year-old classically trained opera singer whose work as a voice instructor allows him to take care of Charlie while his wife works part-time, said parking signs that are mother-specific are not inclusive and do not consider modern families.

"This little guy is kind of heavy. And in the winter, in the snow or the rain, you don't really want to be walking very far with an infant," said Simard, originally from Halifax and now living in Melville, P.E.I.

"It just seems a little silly that it's gendered in that way. I know that as a man, it's weird to be complaining about a sexist policy — I get that. But what about two parents that are fathers? It's not inclusive."

Simard said he posted the photo on Facebook and has heard from other new fathers who are supportive of Sobeys' response, including a dad who was confronted by a woman who questioned why he was using the parking spot at a Superstore grocery store.

Simard said he was impressed by the quick response from Sobeys and hopes other grocery stores follow suit.

"They seemed incredibly open to addressing it immediately, which is so refreshing," he said.