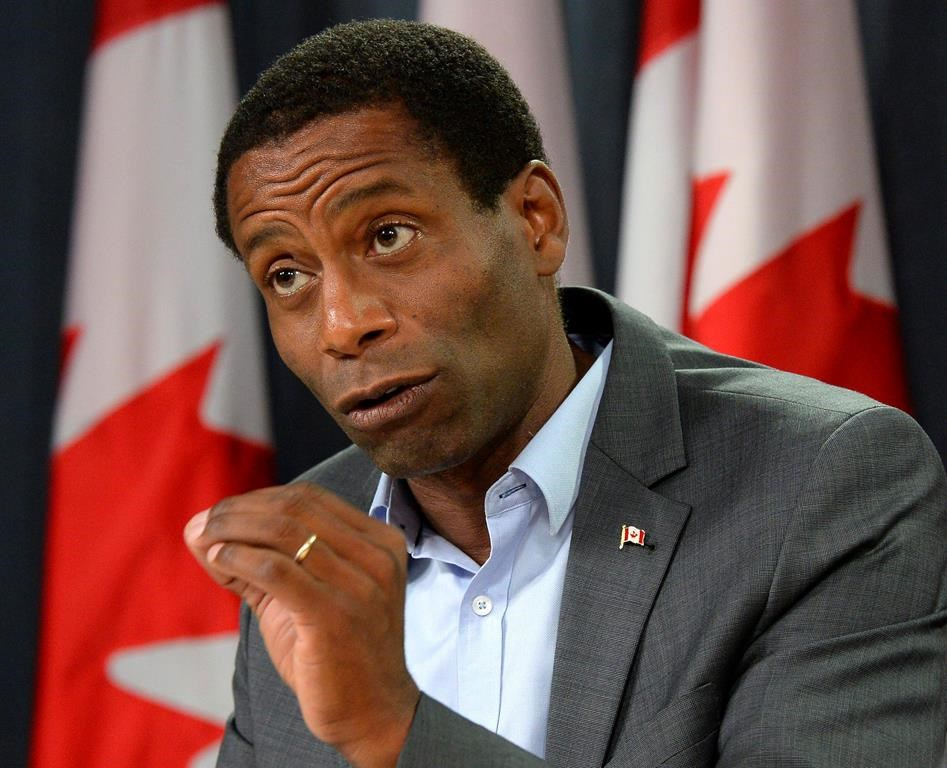 Greg Fergus speaks during a press conference in Ottawa on Sat. September 12, 2015. File photo by The Canadian Press/Justin Tang
Previous story
Next story

The plan to legalize marijuana should recognize that the black community has been overly criminalized for using the drug, says a Liberal MP who is calling on the government to consider that perspective.

"We do know that black Canadians have been disproportionately charged with and are imprisoned for possession of small amounts of cannabis," Greg Fergus, a Quebec MP who chairs the Liberal black caucus, said Tuesday.

"I don't think that's because there is a greater propensity in the black community to consume marijuana," he said. "We have to look at the questions of systemic racism."

Fergus added that the same could be said for Indigenous peoples and he wants to make sure that is reflected in the ongoing debate over the proposed legislation to legalize marijuana, also known as Bill C-45, which the House of Commons health committee will begin studying next month.

The MP, who gathered with other African-Canadian leaders in Ottawa this week to discuss this and other issues affecting people of colour, said they also want to reach out to the community to discuss the economic and social justice impacts of the proposed legislation.

Fergus nonetheless said he agreed with the Liberal government's decision not to decriminalize simple possession of marijuana for the time being.

"How can the Liberals claim to understand this issue and yet choose to keep handing out possession charges and criminal records that unfairly target young people of colour?" he said in an emailed statement.

Fergus, who appeared at a news conference in Ottawa alongside Michael Coteau, the Ontario minister responsible for anti-racism, and Independent Sen. Wanda Elaine Thomas Bernard, said the leaders also discussed the need for more data on race across all levels of government.

As well, they talked about the importance of seeking allies outside their communities and efforts to adopt the UN's International Decade for People of African Descent.

They all spoke of having strong reactions to seeing the racism and hatred expressed by white supremacists who marched earlier this month in Charlottesville, Va., but expressed hope that those voices are in the minority.

"It was shocking. I never expected to see in this day and age such baldly held views on anti-Semitism or on racism," said Fergus.

"The comforting thought that I had, of course, is the law of numbers," he said, adding that he felt the same way when he saw that counter-protesters outnumbered those who were with La Meute, a group associated with the far right, in Quebec City over the weekend.

"I feel strongly that most people don't hold those views."

Thomas Bernard, a Nova Scotia senator, said it was a reminder of what her ancestors lived through, but she tried to focus on those who spoke out against the racism.

"I think we need more of that around the world," she said. "We need people who disagree with the narrative to take a stand, to express that in some way, to say 'This is not acceptable.'"

All three were more cautious when pressed on what they thought of the mixed messages U.S. President Donald Trump has been sending on what he thought of the events in Charlottesville, but Coteau said everyone has the responsibility to denounce hatred.

"I think any form of hate that exists, any form of overt racism that's out there publicly, it needs to be stopped and we need to speak against it," said Coteau, who is also the minister for children and youth services.