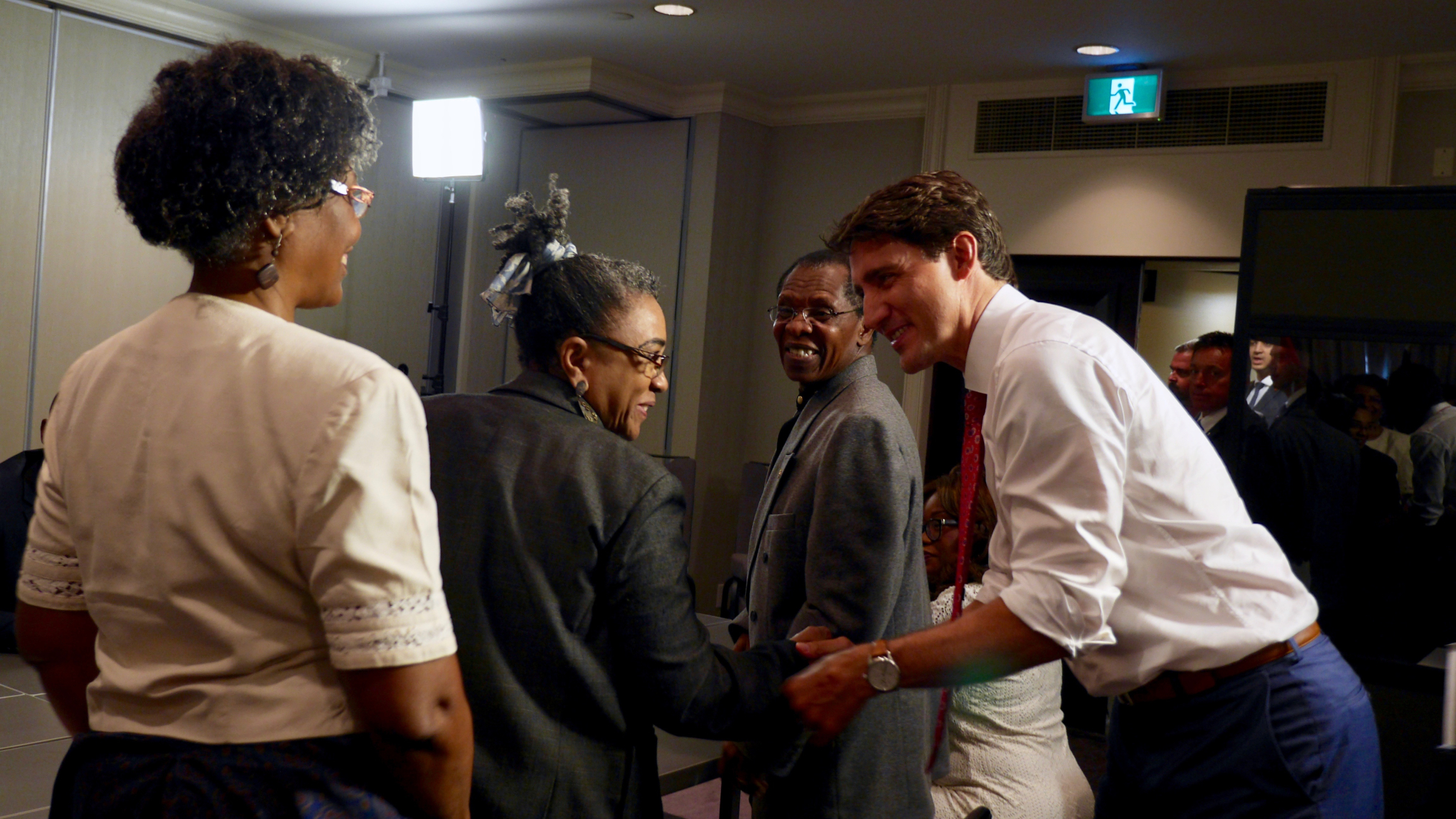 Prime Minister Justin Trudeau met with Haitian community leaders in Montreal on August 23, 2017 as a wave of Haitian asylum seekers from the U.S. are crossing into Canada. Photo by Clothilde Goujard.
Previous story
Next story

Despite mounting criticism, Prime Minister Justin Trudeau said Wednesday that his government had a firm grip on how to handle thousands of asylum seekers who have illegally crossed into Canada from Donald Trump's America.

Speaking to reporters in Montreal, Trudeau said that new measures, including additional staff, were yielding “positive results.” He made the comments after meeting with an intergovernmental task force created to assess the exceptional situation.

More than 6,000 asylum seekers have been intercepted by the RCMP since July after crossing illegally into Quebec from the United States. The surge has put a strain on Quebec's capacity to accommodate new arrivals. Several temporary housing centres were opened in Montreal including one in the Olympic Stadium. Canadian Forces personnel also built a camp for 1,200 people at Quebec's Lacolle border crossing, south of Montreal, to accommodate the ongoing wave of asylum seekers.

“We will continue to defend the integrity of our immigration system, and remain careful stewards of an extraordinarily precious asset in the 21st century world, which is to have a population positively inclined towards immigrants, towards refugees, understanding that being welcoming and open is a source of strength," he said.

He added that his priority was Canadians’ safety and asked that migrants “follow the rules”.

“Canada is a welcoming society but we are a country of laws,” he said in French.

He confirmed Haitian-born Liberal MP Emmanuel Dubourg, who is part of the task force, is heading to Miami tomorrow to speak to Haitian leaders there and give interviews in Creole to explain Canadian immigration laws and counter misinformation.

In the meantime, the intergovernmental task force on irregular migration, created last week, will continue to coordinate and adjust to the situation, Trudeau explained.

They had a conference call on Saturday and met for the first time in person in Montreal on Wednesday with Trudeau joining for about an hour.

Quebec Immigration Minister Kathleen Weil said she was satisfied by early progress made by the task force, which will improve coordination and decision-making.

“We’d been spending the last weeks going up and down (different levels of governments) and sometimes we didn’t even get the same information,” she said after the press conference.

Weil said she had been asking for information about the demographics of people coming into Canada so that school boards in Montreal could prepare. She finally got that information during today’s meeting: between one third and one fourth of the incoming asylum seekers are under the age of 18.

While Minister Weil says the situation has been handled well, not all politicians in Canada agree.

Some have complained that Trudeau provoked the flood of asylum seekers by tweeting out a message in January, shortly after President Trump's inauguration, that Canada would welcome "those fleeing persecution, terror & war... regardless of (their) faith."

Speaking to reporters in Ottawa before the prime minister’s news conference, Conservative Party immigration critic Michelle Rempel said she was frustrated by Trudeau’s leadership on the issue and said he was downplaying the seriousness of the situation.

“Here we are at the 11th hour, heading into the winter, with tent cities at our border, with the prime minister finally coming out,” said Rempel, MP for Calgary—Nose Hill.

She also said the government was not prepared to handle the volume of asylum claims which could reach up to 36,000 by the end of the year, causing significant costs and delays in government services.

“The government does not have a plan either to deal with processing, or with housing or the impact that these types of claims will have on Canada’s social assistance programs, this year.”

Earlier in the day, the mayor of Quebec City, Regis Labeaume, whose city recently saw far-right groups such as La Meute walk down its streets during demonstrations on Sunday, attacked politicians -without naming any in particular — for causing confusion.

“Quebecers just want to know where we’re going, where it starts and where it ends. It starts at how many and it ends at how many,” he said referring to the arrival of asylum seekers from the U.S. “It’s not that people don’t want immigrants, they just want to understand what the plan is.”

The Canadian Press reported that officials said that this week the number of asylum seekers amounted to 140 every day compared to 250 in the past weeks.

However, Minister Weil is uncertain whether this was just a momentary slowdown or part of a bigger trend.

This whole immigration situation at the manitoba and Quebec borders with the USA is not being handles in my view. First of all if more than half of these immigrants will be sent back because they do not meet the refugee status why let them in in the first place. What a waste of time, effort and a huge cost to the taxpayers. There is no crisis or civil war in the USA. Secondly there are many immigrants and or refugees already in the country who have been waiting for years to have their citizenship approved and now they may have to wait longer due to a lack of resources. There is something wrong with this picture.