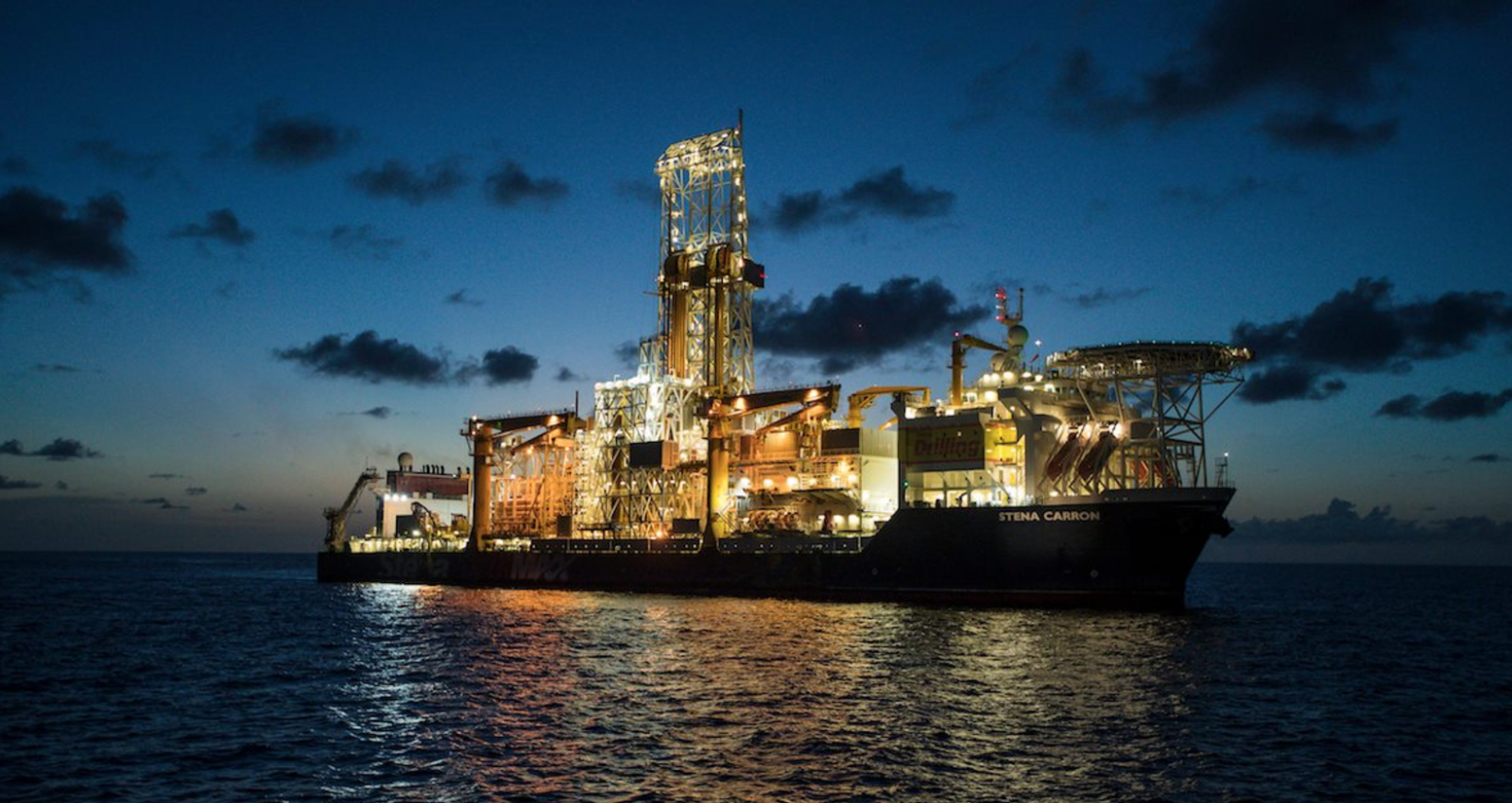 ExxonMobil's drill ship, the Stena Carron, was sent into Guyanese waters this summer to explore oil in the Payara reserve. Photo courtesy of Exxon on Facebook
Previous story
Next story

Two Harvard University scientists who accepted a reading challenge from ExxonMobil have concluded that the company deliberately misled the public on climate change for years.

The documents included a variety of published academic papers, internal exchanges and paid advertorials, which were checked for consistency in their messaging on climate change as a “real, human-caused, serious and solvable” problem.

The study was launched in response to a public challenge from Exxon, the world’s largest oil company, to “read all of these documents and make up your own mind” as it faced mounting accusations in 2015 that it had deceived shareholders and the public on global warming.

Exxon did not respond to requests for comment on this story, but has been quoted in other media outlets dismissing the study as “inaccurate and preposterous.”

According to Supran and Oreskes, “ExxonMobil’s advertorials included several instances of explicit factual misrepresentation.” Their report was published Wednesday in the journal, Environmental Research Letters.

The pair found that 83 per cent of Exxon’s peer-reviewed papers and 80 per cent of its internal documents acknowledged that global warming is real and human-caused, but only 12 per cent of its published advertorials did. Eighty-one per cent of these editorial-style pieces instead expressed doubt in climate change.

An internal Exxon document from 1979, for example, confirmed: "The most widely held theory is that...the increase [in atmospheric carbon-dioxide] is due to fossil fuel combustion." It went on to warn of the "warming of the earth's surface," and "dramatic environmental effects before the year 2050" caused by fossil fuel consumption, the study noted.

Yet nearly 20 years later, in a 1997 opinion piece published by The New York Times, Exxon wrote that the "science of climate change is too uncertain," and "we still don't know what role man-made greenhouse gases might play in warming the planet."

The report authors noted that most of Exxon’s research was hidden in its offices or published on platforms accessible only through paywalls, while the advertorial content — which cost on average, US$31,000 a piece — were publicly accessible in The Times, and designed to influence a readership of millions.

Oreskes and Supran published an opinion piece in The New York Times explaining their findings earlier this week, and on Thursday, Exxon submitted a letter-to-the-editor in response. It called upon readers to sort through the authors’ “twisted logic” that it somehow “misled on climate change while advancing climate science at the same time.”

It also raised conflict of interest concerns, given that the authors each have backgrounds in the movement against fossil fuels.

“The study – and the campaign against our company – has been paid for by the Rockefeller Family Fund, whose president, David Kaiser, acknowledged in an NPR interview that he wants the company to pay billions in reparations,” wrote Suzanne McCarron, Exxon’s vice-president of public and government affairs.

“Let me be clear. Our statements about the risk of climate change have always been consistent with our understanding of climate science. Period.”

Neither author responded to requests for an interview on Friday, but both Oreskes and Supran were quick to respond to Exxon's dismissal of their paper on Twitter:

"Best summary of #ExxonMobil response: 'What matters is that they’re making up for their past mistakes now by refusing to acknowledge them,'" wrote Oreskes.

Best summary of #ExxonMobil response:
“What matters is that they’re making up for their past mistakes now by refusing to acknowledge them.”

The next chapter of #ExxonKnew?

Exxon is currently under investigation by New York Attorney General Eric Schneiderman, who issued multiple subpoenas to the company in November 2015 to uncover whether it had misled the public and its shareholders about climate change for decades. The probe was prompted by media reports that examined Exxon's history of climate change research.

The Texas-based multinational has since been forced to hand over more than one million documents — a high-profile scandal that has been marked by the hashtag, #ExxonKnew.

In court documents, Schneiderman alleges that Exxon's disclosure of climate risks "may be a sham," and the company's claims that it took the financial burden of carbon pricing into account in its communications with investors were false. None of the allegations have been proven in court.

"Internal documents produced by Exxon reveal that from at least 2010 through approximately June 2014, Exxon told its investors it used one set of proxy-cost figures, when in fact the company’s internal policies set forth a second set of lower proxy costs (and therefore a less risk-sensitive version) for use in its internal business planning," read the court documents.

Schneiderman's office declined to comment on the new Harvard study directly, but in an emailed statement, reiterated that there is "significant evidence" suggesting Exxon misled the public on climate change.

"As detailed in our filings in New York court, the Attorney General's investigation of ExxonMobil has uncovered significant evidence indicating that Exxon may have misled New York investors and consumers about the risk of climate change to the company," said Amy Spitalnick, press secretary for the New York State Office of the Attorney General.

"We will continue to vigorously pursue our investigation regardless of Exxon's unprecedented campaign of delay and distraction."

Following Schneiderman's probe into the company's elusive climate dealings, Claude Walker, U.S. Attorney General for the Virgin Islands, also subpoenaed Exxon in an attempt to invoke the the American territory's anti-racketeering laws. That subpoena has since been withdrawn. The company is still being investigated by the U.S. Securities and Exchange Commission, which is determining with it appropriately disclosed the business risks of human-caused global warming.

When he sought "guidance" from Exxon on how to apply its corporate plan's climate change costs to Canada's oilsands, he was directed "in certain instances" to "deviate from the company’s internal policies" by applying a lower cost, the court filing states. Exxon argued that it could not produce Iwanika for testimony because it didn't control the actions of its majority-owned subsidiary Imperial Oil. But a U.S. judge ordered Exxon to produce him for deposition, E&E News reported July 17.

Exxon continues to unwaveringly deny that it misled anyone on climate change, and has published a section on its website called, 'Understanding #ExxonKnew.' The section accuses the 2015 media articles of "cherry-picking" statements from company officials and mispresenting "the context of other events and statements," while outlining Exxon's commitment to fighting climate change.

Trans-Northern Pipelines Inc., and its pipeline infrastructure are jointly owned by three of the planet’s largest oil companies — Imperial Oil, (owned by Exxon), Royal Dutch Shell, and Suncor.
Trans-Northern has been issued numerous safety orders by the National Energy Board related to unsafe operations of its pipeline. Two NEB board members wanted its pipeline shut down.

The National Energy Board was long aware of these historically contaminated sites, yet chose to ignore repeated pleas from landowners for remediation and compensation.

The numerous affected landowners are still waiting for this deceitful, morally bankrupt pipeline company, its owners, and the National Energy Board, to take responsibility, clean up these lands, and compensate the landowners for their losses.

These devious companies routinely practice deception in everything they think, do and say. They are the tobacco companies of the 21st Century. It's a brave new world, isn't it?