This Netflix Super Pig could shake up the American food chain 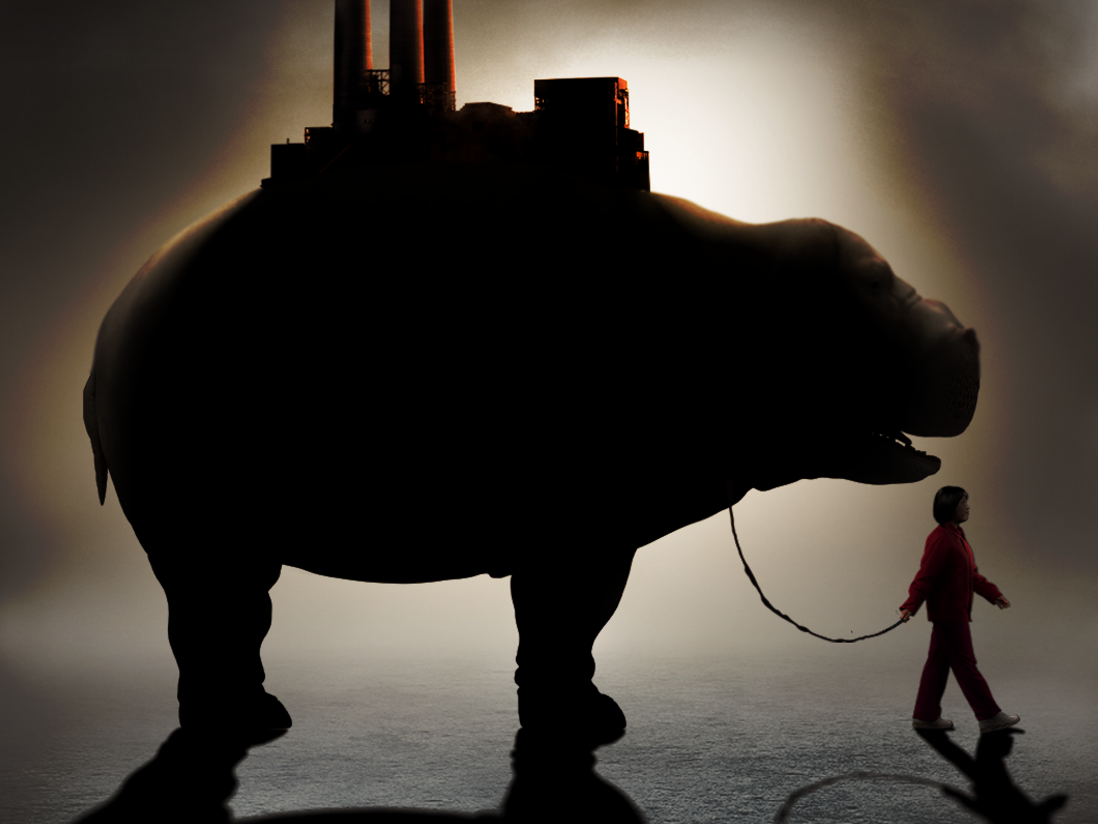 Okja is a feature-length film released by Netflix on June 28, 2017 that teaches important lessons about consumerism, heart and sustainability. Photo courtesy of Okja on Facebook
Previous story
Next story

From the idyllic mountains of South Korea to a horrifying meat-processing plant in New Jersey, Bong Joon-ho’s Okja is a brilliant satire that provides a stark and grim commentary on the modern-day capitalist food chain.

It's a gripping, disturbing and heartwarming journey with a lesson that may very well leave you in tears.

Meet Okja, a hippopotamus-like “Super Pig" genetically engineered by the Mirando Corporation, a New York City-based agrochemical corporation trying to propagate a revolution in global food production. At a young age, Okja is sent to be ethically raised by a poor South Korean farmer and his granddaughter, Mija, who quickly develops a close relationship with the gentle giant.

After 10 years of living in the peaceful countryside with her beloved pet, Mija is distraught when Okja is taken back by the company to be presented to the world as “The Best Super Pig.” The Mirando Corporation has sinister plans for Okja and her kind, and Mija’s rescue mission brings her face-to-face with the dark realities of factory farming and genetic engineering.

Sound familiar? It should.

An #OKJA hug is here to help you feel better. pic.twitter.com/0UAe3LC4Hk

A mirror of Monsanto

Tilda Swinton stars in this Netflix original, released in June, as the neurotic CEO Lucy Mirando. She satirizes today’s ultra-hipster chief executives, as she quickly pounces on Mija’s plight to turn her into a brand ambassador for Mirando.

You’d be forgiven for mistaking Mirando for the multinational conglomerate Monsanto; both have backgrounds in agrochemical production and are moving towards genetic engineering in a bid to reclaim a positive public image after being a main supplier of nerve gas (a.k.a, the shudder-inducing Agent Orange) used during the Vietnam War. Monsanto is a corporation synonymous with shady activities and an utter lack of morals, and director Bong Joon-ho draws an excellent comparison to it throughout the film.

Lucy Mirando is an idealist who genuinely wants to solve world hunger through the production of low-waste, cost-effective Super Pigs. But by the end of the film, it's clear that Lucy and her ideals are not cut out for a profit-driven capitalist food chain, and ultimately, she is replaced by her twin sister Nancy, an uptight businesswoman who has no time for morals and ethics, and cares only about Mirando’s bottom line.

No vegans in this film

Contrary to what you’d likely assume, Okja is a far cry from advocating for a vegan lifestyle. Quite the opposite — the film makes a point of showing Mija and her grandfather devouring meals of chicken and fish.

Instead, it is a magnificent story woven around the savage teeth of consumerism and the capitalist solution to curbing mass meat production. The reason Okja is retrieved from the mountains and brought to New York City is to participate in Mirando’s “The Best Super Pig” contest, a sick marketing ploy designed to introduce the world to its soon-to-be new favourite bacon.

While Mija is in pursuit of Okja, she encounters the non-violent extremist group ALF (Animal Liberation Front) which reveals to her an agenda of its own. They want to outfit Okja with a camera and microphone and send her to Mirando’s testing laboratory in New York to document the conditions in which other Super Pigs are living.

In a blink-or-you’ll-miss-it moment, ALF member 'K' purposefully mistranslates Mija’s desire to take Okja back to the mountains and instead tells other ALF members that she supports their plan. Okja is then released back to Mirando’s custody, and we are left to see what happens inside of the Mirando GMO (genetically modified organism) lab.

The darkest dose of reality

The laboratory scenes are by far the most difficult to watch. In the first few moments of the film, we see Okja risk her own life to save Mija after she slips off a cliff. We know Okja is a sentient, intelligent being who feels both love and pain.

And when Dr. Johnny (played by Jake Gyllenhaal in a performance four times as weird as it needs to be) begins his sadistic tests on Okja, we are left feeling sick to our stomachs as she is subjected to forced mating, beatings, and a horrific live meat-sampling scene. We see the light in Okja’s eyes fade away, replaced by fear and suffering.

Deep down, we know that Okja’s pain is a daily reality for millions of animals in factory farms, whose products we consume daily.

Unfortunately, Okja doesn't reveal anything new about animal suffering and our insatiable desire for meat. In the last decade, several documentaries have boldly exposed the gruesome conditions of many factory farms that house our future hotdogs and hamburgers — under no circumstances can we plead ignorance.

Fast Food Nation exposed how the meat industry exploits immigrants workers in processing plants, as well as unknowing consumers and marketing specialists who represent multinational giants such as McDonald’s. Food, Inc. detailed how industry titans have monopolized the food chain and how factory farms destroy the livelihood of independent farmers, while subjecting animals to a short and brutal lifetime of squalor and unimaginable suffering. Cowspiracy addressed the effects cattle-raising has on the environment and the potential implications for our future on Earth.

Okja builds upon these documentary masterpieces, capitalizing on our (supposed) ability to feel for Okja and resonate with her pain. This makes the film a supremely effective way to discuss society’s over-indulgence in meat, the necessity of factory farms, and the roles large corporations play in creating and maintaining these enormous operations.

And now, to change our behaviour

Yet even now, in 2017, upon hearing the word ‘vegetarian,’ people put their guards up, and become suddenly defensive of their choice to consume meat. Perhaps the aforementioned existence of ample evidence linking animal cruelty and meat consumption has resonated with the general public, but in the form of guilt and not education.

I don’t believe these films exist to make anyone feel guilty for participating in a system that is forced-fed to you through merciless advertising and strategic campaigns. Instead, they arm society with the education required to make better choices, in the hope that even a small amount of change will create ripples in a system that exploits nearly everyone involved in it.

They are not all necessarily cries for strict vegetarianism (or veganism for that matter). They provide a stepping stone: moderation.

If the average consumer halved, or even quartered their meat consumption it would be enough to shake the system, and potentially give power back to small farmers who raise their animals ethically. That is the key message in Okja: meat consumption is not bad, but factory farming is.

Down with factory farming

Factory farms have been created to feed the billions of voracious meat-eaters who don't care where their steak comes from, how their steak once stood knee-high in feces until it was slaughtered, how it was rinsed with ammonia to prevent harmful bacteria from growing in it, or how the cow lived a short tortuous existence until it found its way to your plate.

If more consumers cared and joined in protests against animal cruelty on farms, they could start a revolution.

I spent the last year living in Busan, a bustling seaside metropolis in southeast South Korea. It is a beautiful country with wonderful people and delicious food that features a lot of pork. Samgyeopsal — grilled pork belly — is one of the most favoured dishes across the country. One of Busan’s most famous dishes, dwaeji gukbap, is literally pork soup.

From my perspective, Bong Joon-ho's choice to use a Super Pig to represent the plight of factory-farmed animals was a deliberate symbol for the sheer volume of pork consumed daily in South Korea. It's a volume I can easily attest to, having experienced far too many pork 'surprises' in my dinner. Worth noting, is the fact that one of South Korea’s largest suppliers of meat is the United States — and Ho chooses to base Mirando in New York City.

Okja’s genius is in questioning the truths we blindly accept every single day of our lives. It follows Okja through a system that refuses to recognize her as more than a commodity; it comments on a capitalist food chain that abuses animals to appease our taste buds.

It is worth watching to experience how cleverly Ho appeals to our humanity in an effort to educate us about factory farms and genetic engineering; it is equally worth it to also reflect on why we need our humanity appealed to in the first place to put an end this horrific system.

Will you feel guilty after watching it? Put it this way, you likely won’t be craving bacon anytime soon. But that’s the whole point.

If you watched #OKJA and didn't shed a single tear... pic.twitter.com/G8sgEqffsH

Over the past few years, I've

Over the past few years, I've been slowly cutting back on my meat consumption and increasing my veggies with no noticeable problems. It's amazing what can be done with the wide variety of beans these days.