From NASA to nunhood: P.E.I. engineer explores faith as scientist and sister 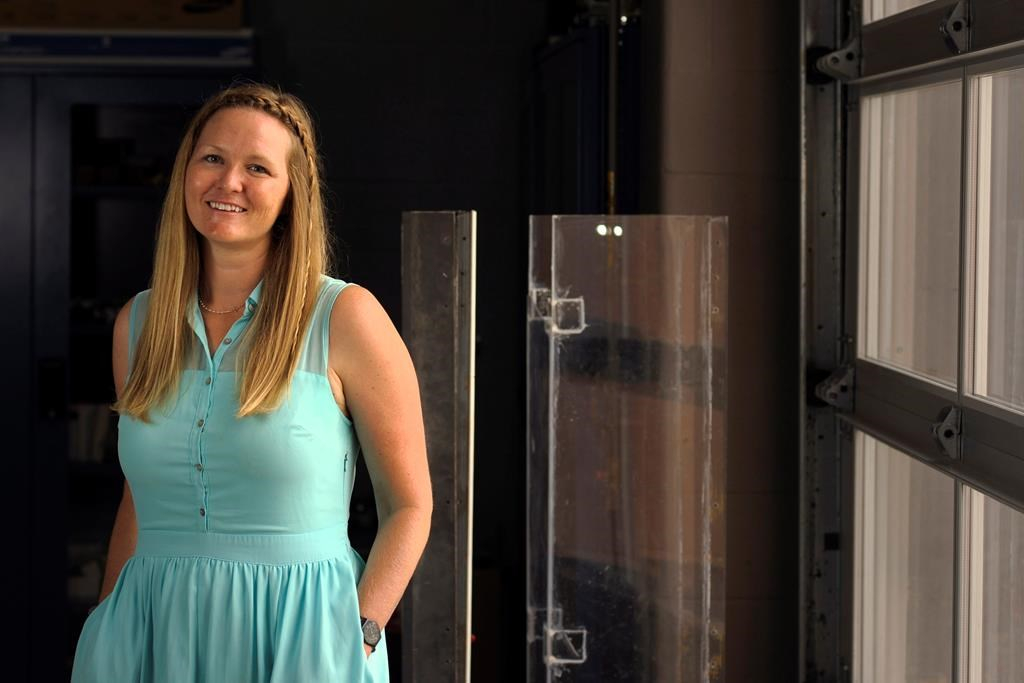 Libby Osgood poses for a portrait inside the engineering research building on the University of Prince Edward Island campus, in Charlottetown on Saturday, August 19, 2017. File photo by The Canadian Press/Nathan Rochford
Previous story
Next story

When Libby Osgood looks into the night sky above Charlottetown, she said she sees it through the lens of God's creation and her own contribution to the engineering of NASA's satellites.

Osgood, an aerospace engineer who has worked for NASA, is taking a sabbatical from her job as a professor at the University of Prince Edward Island to pursue a new vocation — becoming a nun.

"I feel so whole. It feels like there was all these different puzzle pieces before and they just all fit now together," she said. "With the science and religion perspective ... I'm already getting to learn more about my two passions, and seeing how other people have put them together."

Osgood, 34, said she felt like she rushed through life as she ascended through academia, earning a PhD in mechanical engineering and eventually teaching more than a dozen courses.

At around the age of 23, NASA hired her as a systems engineer whose job it was to nag scientists to fill out the paperwork required to prove a satellite would launch as planned.

She wore a NASA badge and bright pink heels — a bold fashion statement in the buttoned-up, male-dominated workplace — along with her grandmother's crucifix, but other than religious heirlooms, Osgood said she tried to avoid public displays of faith.

During her four years stationed across the United States, Osgood said she practiced her faith during her off-hours, but at work, she said the subject of spirituality seemed almost taboo.

In 2010, Osgood moved to Charlottetown, where she spent her summers growing up visiting her mother's family, and eventually became a professor at UPEI.

For much of her life, Osgood mostly confined her faith to the personal realm. Accustomed to dispassionate scientific jargon, Osgood said speaking openly about devoting one's life to God felt almost "counter-cultural."

Osgood said this separation was seemingly made literal when her parents visited her in Charlottetown and displaced her from her bedroom, so she "secreted away her bible" and prayed in a closet.

With the support of Charlottetown's tightknit Catholic community, Osgood said she found the courage to begin the process of her religious "coming out."

"It's more vulnerable to be able to say what you truly desire," she said. "I think it was really hard first to admit to myself I truly desired to do something that was so against the norm, and second, then to admit it to other people."

Over the course of two years, Osgood explored the possibility of a religious calling.

She said a visit from Vatican astronomer Brother Guy Consolmagno opened her up to the idea that "science and religion could coexist."

"All of this (background) wondering about being a nun, I never let myself feel that, because I liked engineering too much," said Osgood. "All of a sudden, I realized I could be an engineer and I could be a sister.

"I don't have to change my life 90 degrees like I think I do. I can keep doing this and just live this much more fully."

Since she announced her career change, other scientists of faith have sent her messages of support.

Osgood is now embarking on what she calls a two-year "nun bootcamp" in New York as a sister-in-training at the Congregation of Notre Dame.

After taking her vows, Osgood hopes to return to Charlottetown to teach the word of God and the principles of aerospace design — but not at the same time.

She said her classes at UPEI will remain focused on the science, but in the past, there have been curious overlaps between her two passions. In one course, Osgood gave her students a $20-budget to design a system to walk on water.

While the shift from the classroom to the convent may seem drastic, Osgood said her spiritual and scientific studies compliment one another. As she sees it, they are both expressions of God's love.

"The reason that we pursued science initially was that we looked at the stars and wondered what that is," Osgood said. "Science and religion is like looking at that view, where you get a much better picture when you work together to try to understand that as opposed to individually."