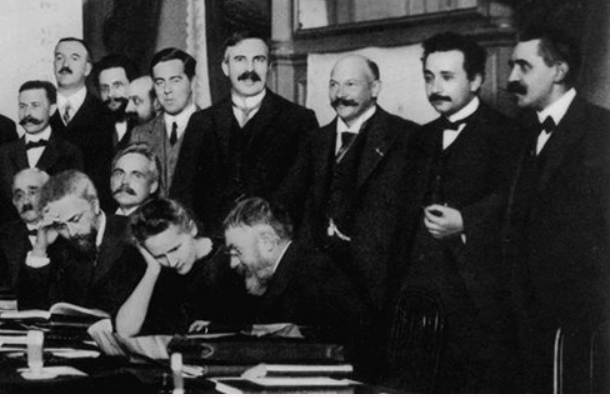 Marie Curie, a very prudent woman, theorizing with Henri Poincaré at the first Solvay Conference in 1911.
Previous story
Next story

This piece is a special collaboration with RSF Social Finance. The post was co-written with Kelley Buhles, Senior Director of Philanthropic Services & Organizational Culture, and was also published on the RSF Social Finance blog.

The world of investing abides by various rules. Some are defined and articulated in formal legislation and regulations, while others are based on customs, common practices, and opinions expressed by jurists in court cases. The expectation of “prudence” in financial management is one such case. (1)

Originally expressed as the “Prudent Man Rule,” this standard—put simply––requires fiduciaries to consider various economic, risk, and liquidity factors as they relate to their clients or beneficiaries, and to invest accordingly. The Uniform Prudent Investor Act, adopted in the 1990s, allows investors to use the principles of Modern Portfolio Theory (MPT), including a total return approach to investing and an emphasis on diversification, as a means of achieving “prudent” fiduciary decisions. The act invited women into the equation, only linguistically, by referencing a “prudent person” rather than a “prudent man.” Although “man” was ditched for the gender-neutral term, the thinking and theory were not broadened to include the feminine.

For decades, there was an explicit expectation that men set the standard for prudence: “to observe how men of prudence, discretion, and intelligence manage their own affairs.”

While the concept of the “prudent woman” may be interpreted as the opposite extreme, we choose this term for our theory over a gender-less alternative because we’ve seen how semantics can hide the truth.

We’ve observed that the dominant economic paradigm still reflects what are traditionally considered masculine traits. We wonder what value feminine traits might bring to our increasingly challenging economic situation. In other words, is it time to ask, “What would a prudent woman do?”

One of the ironies of the Prudent Man Rule in economics is that the word “economy” derives from the Greek word that means “management of the household.” In our contemporary world, management of the household has become “home economics,” a term associated with “women’s work,” usually unpaid and undervalued. Meanwhile, men dominate the system that we now call economics, that is, the making and exchanging of goods and services in the pursuit of maximum profit.

The market economy, the milieu of the prudent man, has become the lens through which we view our entire world. It is the first and foremost arbiter of ideas and proposals ranging from personal career choices to public policy. Unless an idea makes economic sense, it is subject to ridicule and trivialization.

Those who dare to question the superiority of the economy are considered naïve. This is especially true when it comes to investing. The power of assumptions about the purpose of investing is so great that there is virtually no room for disagreement or debate among the professional cadre of advisors, managers, and other practitioners. These embedded assumptions are then transmitted to and imposed upon the clients who place their trust in these professionals. This circle is reinforced by self-interest and fueled by the allure of wealth and power.

We think this has gone too far. Witness the corruption of our democracy by money and greed, the depletion of our natural resources, the poisoning of people and planet, and the vulgar inequality driven by capitalism run amok and rudderless. These are the real risks to the future of investing and the economy.

The world of business and finance has generally been unappreciative of feminine traits, and many women and men have suppressed these aspects of themselves in an effort to conform to the dominant culture. Furthermore, women are often stereotyped in ways that are simplistic, judgmental, and demeaning. What if we could snap our fingers and instantly transform these stereotypes of women into positive character traits of value and power? What if women’s ways were the ways of business and investing? We wonder what would happen if the prudent woman stepped in.

Let us be clear: we are not talking about how women can conform to the current world of investing, nor are we promoting gender lens investing. We are talking about the unmitigated feminine—unharnessed, unjudged, and unconstrained. In a system that is so heavily skewed toward the masculine, we think a shift toward the feminine—by women and men alike—would be healthy and prudent.

We offer below our take on what it might mean to work with an investment framework that is founded on feminine traits. We have used research into cultural stereotypes and generalizations regarding what is “feminine” and what is “masculine” as a foundation. We recognize and appreciate that these are stereotypes. Feminine traits are, of course, not limited to women just as masculine traits are not limited to men.

To start, let’s look at some of the key character traits that are typically ascribed to men and women. The following information was compiled from studying 64,000 people and published in The Athena Doctrine. (2)

From these traits, we can envision an alternative, feminine way of thinking about economics:

The ideas we describe above are not radical or unrealistic. They are simply more “feminine” than “masculine” and have not been part of the mainstream financial culture of our modern world. Once we open ourselves to these alternative ways of approaching economics, we also become open to a different way of thinking about investing and the standards that could apply to a prudent investor. The Prudent Woman Rule for investing might look like this:

During these trying times, we invite those who have access to wealth of any size to bring a Prudent Woman framework to your investing. We encourage you to have challenging conversations with your investment advisors and financial managers, to question preconceptions about the “rules” of investing, and to imagine what else is not just possible but also valuable and beneficial. Through thoughtful and daring investments, we can build a new field of finance and a new economy based on love, respect, and interdependence.

(1) “All that can be required of a trustee is that he shall conduct himself faithfully and exercise a sound discretion. He is to observe how men of prudence, discretion, and intelligence manage their own affairs, not in regard to speculation, but in regard to the permanent disposition of their funds, considering the probable income as well as the probable safety of the capital to be invested… Do what you will, the capital is at hazard.” https://en.wikipedia.org/wiki/Harvard_College_v._Amory