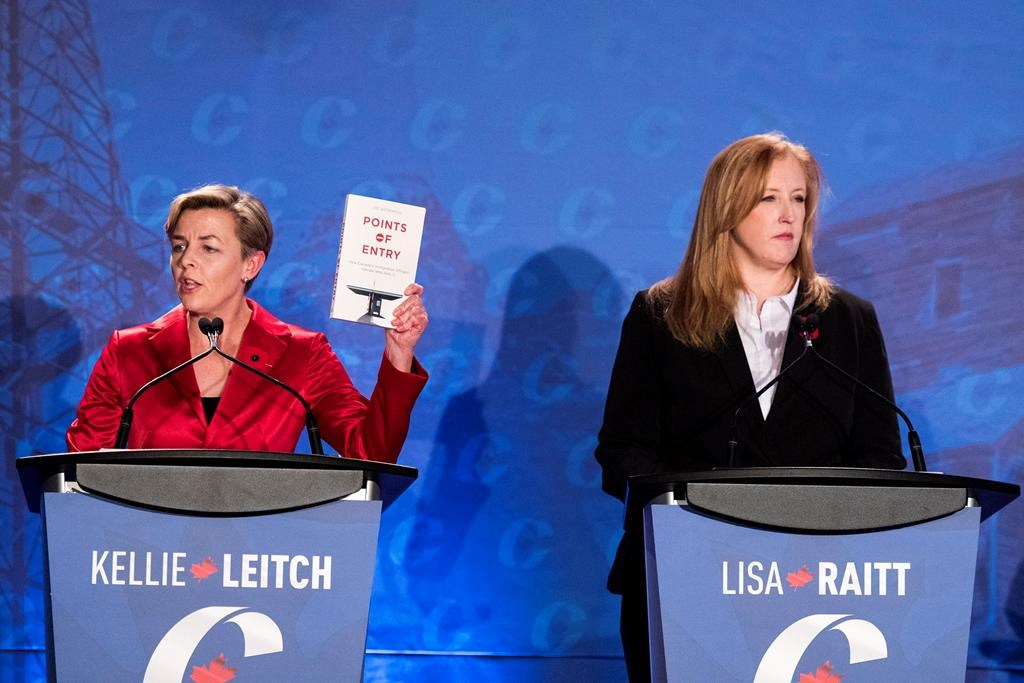 Kellie Leitch flashes signs of her anti-immigrant policies during a Conservative leadership debate in Saskatoon on Nov. 9, 2016 as Lisa Raitt looks away. File photo by The Canadian Press
Previous story
Next story

There isn’t a Minister of Canadian Values to shadow, after all.

Scheer’s decision to keep Leitch out of his inner circle and the Conservative shadow cabinet was politically motivated and the right one to make. Leitch, who ran a divisive political campaign designed to rally a small base, aligned herself with U.S. President Donald Trump whose “exciting message” needed to make its way into Canada.

Foolishly, she thought that messages of hate would work here. Now, Trump is the laughingstock of the world. Scheer, who conceivably wants to win in 2019 and thinks he can, is smart enough to not align himself with people like that. Although it took him awhile, kudos to Scheer also for distancing himself from The Rebel, the very same far-right media outlet whose subscribers Leitch unveiled her “values test” to.

By many accounts, Leitch is a smart woman (yes, there are 22, er, 18 letters after her name!) who is compassionate and very capable of leading. Unfortunately for her, there is no coming back from the unauthentic and insincere campaign she ran—one that went against the very Canadian values of openness, inclusiveness and tolerance for all—all for the sake of drumming up votes. She ended up in sixth place, and now has no critic role to stand out on as a backbencher in the opposition ranks. It’s going to be a long and possibly lonely two years for Leitch on the Hill.

Still, the controversial MP told Huffington Post that she doesn't regret what she did. “There’s a lot of opportunities now for me,” she said. “There are a lot of things that I haven’t been doing in my riding that I can do now, either because of the leadership or because I was a cabinet minister. I don’t have any regrets and I am not disappointed. I am looking forward to a future that hopefully has another Conservative government in 2019. So it’s all good.”

Leitch wasn’t the only leadership candidate left off the Conservative front bench. Veteran MP Deepak Ohbrai, who was previously the international development critic and a former parliamentary secretary, didn’t receive a critic role. He is rumoured to be retiring. Former Conservative cabinet minister Gerry Ritz, was another veteran MP excluded from Scheer's front bench. Ritz announced Thursday that he was retiring from politics.

Brad Trost also did not receive a place in the shadow cabinet. He ran as a social conservative and actively campaigned against abortion. It seems Mr. Scheer, who is also anti-abortion, didn’t want to align himself with Trost either.

(Shadow) Cabinet making is an opportunity for party leaders to promote loyal MPs, hardworkers and star candidates in addition to what should be the barometre: smart capable people. Of course there are all the other considerations like what part of Canada the MP comes from and diversity in language, ethnicity and gender.

Of the 97 Conservative MPs (including Scheer), there are 17 women, 80 men, and more than half come from the West. When it comes to diversity, the Conservative Party is not the shining example. Scheer did the best he could with the representation in his caucus.

It would’ve been difficult for Scheer to make a gender balanced shadow cabinet, but Lisa Raitt’s appointment as the deputy leader and Candice Bergen remaining as the House leader are good signs for a party trying to attract a younger and more diverse voting demographic.

It’s too bad he didn’t give someone like Michelle Rempel (who is smart and capable and has an economics degree) a high profile critic role such as Finance rather than Pierre Poilievre.

Although Rempel, as immigration critic, can still expect to be busy this fall as the government attempts to figure out what to do about ongoing surges of asylum seekers who are fleeing Trump's America for Canada.

With the Conservative leadership race behind them and a solid team in place, we can expect a boisterous and lively fall sitting when MPs return as all parties begin positioning themselves in earnest for the next election.

Wow. NO is so much in

Wow. NO is so much in agreement with the exclusion of Kellie Leitch that it even excluded her from their picture!

Pollievre and Rempel are the

Pollievre and Rempel are the worst. Even Kellie Leitch is better. Too bad that Harper ruined their political careers. But even the Cons might have a future. They can always appel an unwanted conviction.