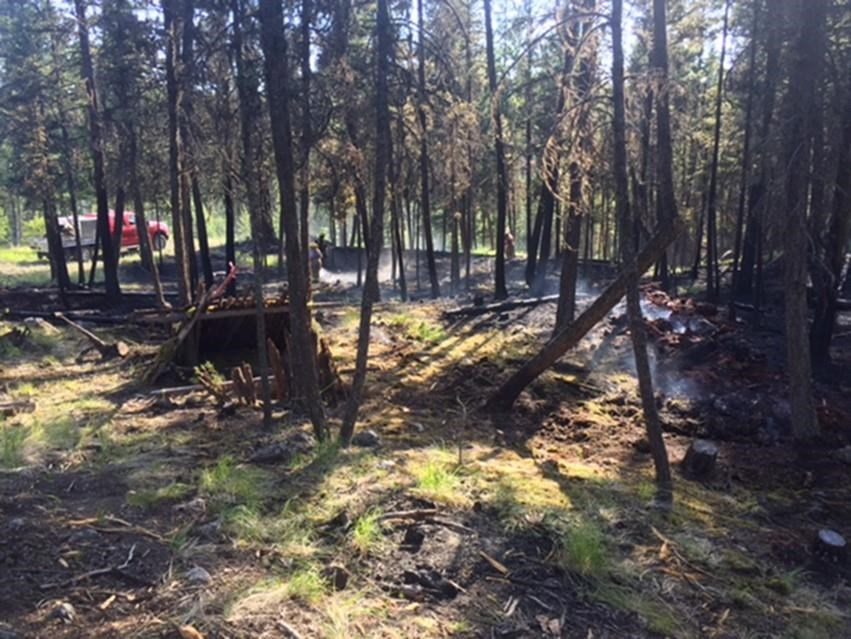 A wildfire in Logan Lake, B.C., in June 2017 is seen in this handout photo. Handout photo by Dan Leighton
Previous story

The fire in Logan Lake started like so many others in British Columbia's worst wildfire season on record — a smouldering campfire, not fully extinguished, sparked flames that spread across the forest floor.

But unlike other blazes that have grown catastrophically, engulfing homes, forests and farmland, the Logan Lake fire in June was kept to a half-hectare. The reason, a local official says, is because the town has conducted extensive wildfire mitigation, in spite of a provincial system he describes as under-funded, burdensome and unfair.

"Had (the fire) been in that area when we did not mitigate that area, we would've had a severe fire on our hands," said Fire Chief Dan Leighton. "That's proof that the work we're doing will work."

In the wake of the 2003 wildfire crisis, which destroyed more than 300 homes and businesses, the British Columbia government asked former Manitoba premier Gary Filmon to conduct a thorough review. In his report, Firestorm 2003, he warned that unless action was taken to reduce fuels such as seedlings, shrubs and wood debris in forests near communities, there would be more severe wildfires.

The province launched the strategic wildfire prevention initiative, a program that provides funding to communities for fuel treatment. To date, the province has provided $78 million to the initiative, a fraction of the amount spent battling blazes or preparing for earthquakes, and less than seven per cent of high-risk land has been treated.

This summer, the wildfire season surpassed 2003, burning 10,600 square kilometres of land and forcing 45,000 people from their homes. The bill is $400 million and rising. The devastation has left community leaders and experts saying the province could have done more to reduce the risk.

"The amount of fuel management to protect communities was minuscule relative to the scale of the challenge," said Bob Simpson, Quesnel mayor and a former NDP forestry critic in the legislature.

The province estimates about 13,470 square kilometres of forest are at high risk of wildfires spreading into communities. The figure is considered rough, provincial-level data and must be verified on the ground, but it's the best estimate available. Some 923 square kilometres have undergone fuel treatment — or just under seven per cent.

John Rustad, the forests minister prior to the B.C. Liberal government's defeat in July after 16 years in power, said the government worked seriously with communities to reduce fuel loads. The province expanded the community forest program, which allows towns to harvest nearby timberlands and make them more fire-resistant, he said.

Unfortunately, the mountain pine beetle epidemic has led to fuel buildup even in places where work was done a decade ago, he said, adding treatment is costly and must be done continuously.

"Could we have spent more? Obviously, hindsight is 20/20," he said. "But when you look at the fires that came in toward Cache Creek or Ashcroft, I don't think there would have been any strategy possible to prevent that kind of an interface (fire) and those kinds of damages."

Madeline Maley, executive director of the B.C. Wildfire Service, said managing wildfire risk is a shared responsibility and the province counts on local governments and homeowners to meet the standards of a program called FireSmart.

The Forest Practices Board estimated in 2015 that the average cost of treating a hectare of land was $10,000, although some experts put the figure at $5,000. That means the lowest cost of treating 13,470 square kilometres would be $6.7 billion. The board said the cost per hectare could be reduced through increased competition and incentives.

In Logan Lake, careful removal of so-called ladder fuels, including tall grasses, shrubs and branches, is what kept the wildfire in June from growing upward and becoming what's known as a crown fire, which leaps from treetop to treetop and is much harder to contain.

But Leighton, the fire chief, said his frustrations with the strategic wildfire initiative are growing. Communities are required to do the work at considerable cost before being reimbursed, he said, adding it can take up to a year to receive funds.

Then there's the fact that the land they are treating is Crown land surrounding the municipality, but the province only pays for 75 per cent of the planning and 90 per cent of the treatment, he said.

"The province should be paying 100 per cent," said Leighton.

Paul Taylor, a spokesman for the Union of B.C. Municipalities, said if the up-front cost is prohibitive for communities, they can ask to submit regular claims to receive payments throughout the process.

The B.C. government created a forest enhancement society last year that has received $235 million for activities including wildfire risk reduction, bringing the total spent on mitigation, when combined with the strategic wildfire initiative, to $313 million.

In contrast, it has spent billions preparing for a major earthquake — a worthy use of funds, but one expert wonders why wildfires have not been made an equal priority.

"Here we are with wildfires with severe consequences," said Lori Daniels, an associate professor of forest and conservation sciences at the University of British Columbia.