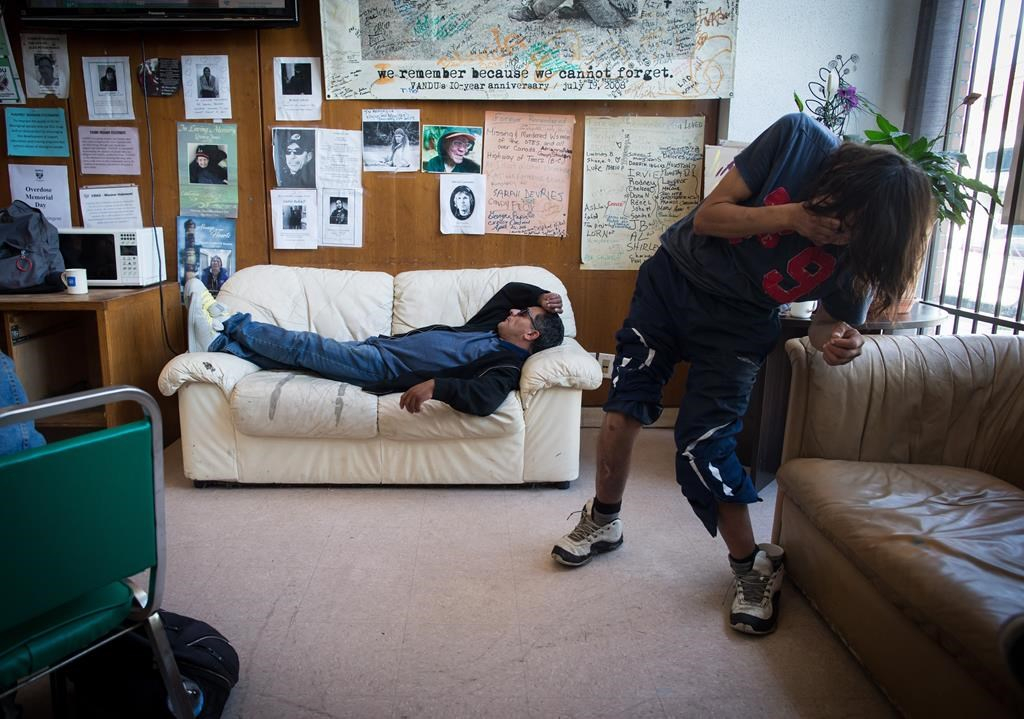 A man struggles to walk as another listens while lying on a couch during a meeting of the B.C. Association of People on Methadone in the Downtown Eastside of Vancouver, B.C., on Wednesday, August 30, 2017. File photo by the Canadian Press/Darryl Dyck
Previous story
Next story

Drug users trying to quit heroin are gathered for a meeting in Vancouver with one mission in mind: to support each other through the struggles of a reformulated treatment drug they say hasn't worked and has instead contributed to the opioid epidemic.

Brad Williamson, 34, sits on a couch with other members of the B.C. Association of People on Methadone as they discuss how a "forced" switch to Methadose drove many to relapse on heroin.

He says the new formula was 10 times stronger but didn't last as long before withdrawal symptoms kicked in and left him "dope sick."

Williamson says he became hooked on heroin after suffering chronic leg and knee pain from 15 years as a flooring installer but entered a methadone treatment program from 2011 to 2013 before returning to using the opioid.

When he restarted treatment in 2014, British Columbia no longer offered the drug that a pharmacist would mix daily for patients from its powdered form into a sweet orange drink. A new cherry-flavoured liquid replacement called Methadose wasn't as effective, Williamson says.

"Before, even if I missed a day or even two or three days on the old methadone, I would be fine but now if I miss one day I am in full-on withdrawal," he says. "On the old stuff, I was able to work and pay my rent. On the new stuff I feel like a slug and I can't keep a job."

Laura Shaver, who heads the association, says the impact of the change can no longer be ignored as health officials expect up to 1,500 people could fatally overdose in the province by the end of the year, based on 780 deaths between January and June.

Shaver, 39, said on methadone, her withdrawal symptoms were kept at bay for about 24 hours, but returned in 16 hours on Methadose.

"It was awful. It disrupted my whole life again," says Shaver, who relapsed onto heroin and was angry that methadone users hadn't adequately been consulted before the change that was so dramatic.

"It doesn't make sense, and all I know is it ruined a lot of lives and it still is, and it's also when I think the major start of the fentanyl crisis was because it was when all these people who weren't using had to go out and self-medicate again."

Ryan McNeil, a researcher at the B.C. Centre on Substance Use, says some Methadose users reported withdrawal symptoms in as early as 14 hours, putting them at risk of seeking illicit opioids.

He says evidence from the centre's research involving people who access Vancouver's overdose prevention sites suggests the switch to Methadose had "huge implications."

"It's an important thing to consider how the methadone formulation change functioned to impact people in the long-term in relation to their methadone treatment and subsequently has been one of the contributing factors to people overdosing from fentanyl or fentanyl-adulterated drugs," he says.

David Pavan, spokesman for the BC Pharmacy Association, says Methadose was developed to reduce the likelihood of abuse, such as injecting it versus ingesting it orally.

"This change is similar to the transition from OxyContin to OxyNEO," he says of the prescription opioid pill that became harder to crush and abuse, though that change has also been credited for creating a market for fentanyl, which made its debut in Canada in 2013 and is often shipped in small packages from China.

The Ministry of Mental Health and Addictions says 17,751 are being treated on Methadose. The methadone maintenance treatment program was administered by the College of Physicians and Surgeons of B.C. since 1996. It transitioned to the B.C. Centre on Substance Use in June, with the launch of a new treatment guideline for opioid use disorder, and is part of a treatment plan including two other drugs.

Cheyenne Johnson, a nurse and clinical director at the centre, says the new guideline recommends Suboxone as the first-line treatment because it has fewer side effects and is safer and can be taken home instead of being taken in front of a pharmacist. Methadose is recommended next, followed by slow-release morphine.

"To our knowledge, this guideline is the first kind in the world that really looks at putting all those options together," she says, adding psychological and social supports for patients are included as part of treatment.

The College of Physicians and Surgeons' guideline had only methadone as a treatment option for 40 years, even though Suboxone has been available in Canada for eight years, Johnson says.

"Other countries have been using this medication since the '90s so Canada is a slow adopter overall."

Members of the methadone group, including Williamson, say their attempts to change to Suboxone were unsuccessful because they couldn't tolerate tapering down their Methadose dosage and felt they were headed for relapse.

Johnson says there isn't enough research on Methadose patients changing to Suboxone but the centre is considering a clinical trial to learn how patients would fare.

She agrees with Shaver, Williamson and others that the change to Methadose should have involved the people who would be directly affected.

"That was terrible. If there was a drug that 60-year-old businessmen had to go and pick up every single day from the pharmacy you bet they'd be consulted. Because it's vulnerable and marginalized populations it's not the same considerations, which is not acceptable."