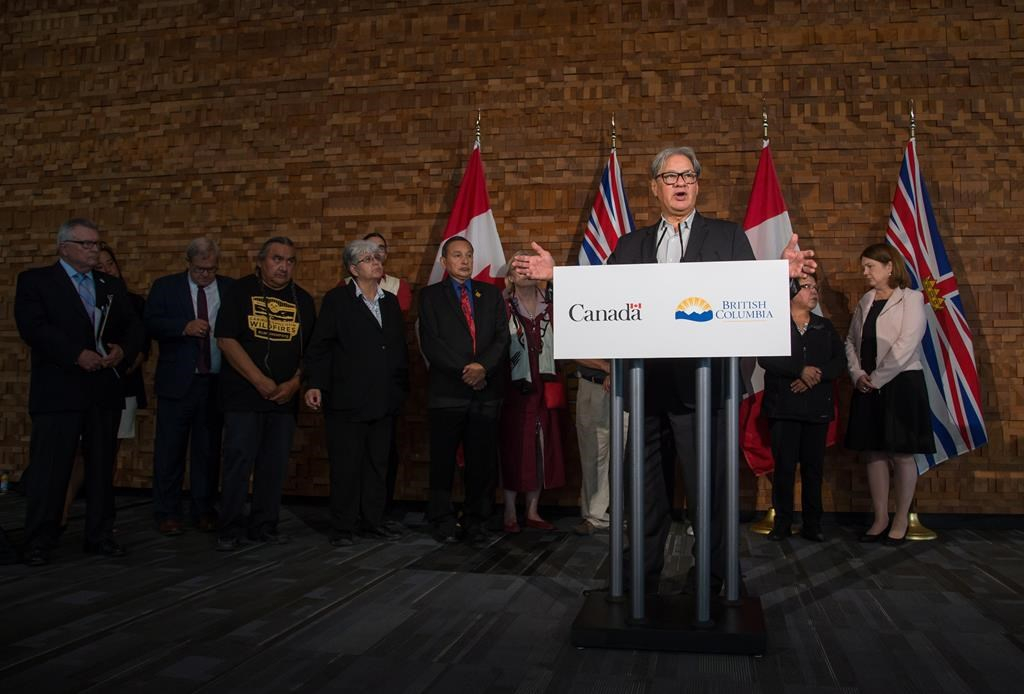 Grand Chief Edward John speaks to media as First Nations leaders along with federal and provincial ministers look on after their meeting to discuss wildfire response in Vancouver, B.C., on Tues. Sept. 5, 2017. File photo by The Canadian Press
Previous story
Next story

Ranchers who have lost animals and land to devastating wildfires across British Columbia are getting help from the provincial and federal governments.

The governments have announced $20 million that farmers can use to replace lost breeding animals and re-seed damaged lands, with 40 per cent of the funding covered by the province and the federal government paying for 60 per cent of the costs.

"Farmers have been hit hard in this situation," said federal Agriculture Minister Lawrence MacAulay on Tuesday. "As someone who has farmed and raised livestock, my heart goes out to all the families and communities that have been affected by this disaster."

He made the announcement at a news conference after federal and provincial cabinet ministers and First Nations met in Vancouver to discuss how to rebuild following the crisis and improve prevention and response in the future.

At least 30,000 animals have been killed or displaced in this year's record-breaking wildfire season, MacAulay said.

Kevin Boon of the BC Cattlemen's Association said the funds would not only help individual ranchers get back on their feet, but would also help communities that rely on agriculture.

B.C. Forests Minister Doug Donaldson said the previous provincial government did not do enough to mitigate the risk of wildfires and he believes much more must be done to reduce fuel, including wood debris and underbrush, around communities.

Since 2003, the previous government invested $78-million in an initiative that funds fuel treatments around municipalities, but some communities have complained the program is under-funded and burdensome. Less than seven per cent of high-risk area has been treated.

Donaldson said the provincial and federal governments are committed to the national wildfire strategy, which aims to reduce wildfire risk in forests that threaten communities.

The forests minister added that he will put forward a submission to the B.C. budget to make more funds available for fuel treatments.

"We want to make sure that communities are safer and that effort, in my opinion, has not been what it needs to be to protect communities," he said.

Donaldson also addressed the impact to sawmills, saying about 53 million cubic metres of timber have burned and that will affect supply. He said the ministry is working on ensuring mills can use wood that is still viable, and is looking at issuing salvage licences in certain areas. It's also beginning to plan reforestation, he said.

Several chiefs of B.C. First Nations expressed their frustration on Tuesday with the level of funding and support their communities have been given to fight wildfires.

Chief Ann Louie of the Williams Lake Indian Band said her First Nation felt abandoned during the crisis and she hopes the governments adopt a proposal put forward by Grand Chief Ed John to increase funding and supplies to Indigenous communities.

"We were invisible," she said.

John, a prominent Indigenous leader in B.C., said the proposal was delivered to the federal government at the end of July and it calls for $200 million for emergency preparedness and response in First Nations communities.

He said the federal government is eager to work with national and local First Nations leaders to develop a community-by-community inventory of the emergency risks and the assets and resources available.

The federal government would then work with those communities to fill the gaps, he said.

"It is simply unacceptable that some people in this country have full, developed plans and resources to deal with crisis situations and other communities don't," he said. "That is unacceptable to this country and that's a gap that absolutely must be fixed."