At The Turn: U.S. golf gear website GlobalGolf.com sets up shop in Canada

By The Canadian Press in News, Entertainment, Politics | September 9th 2017 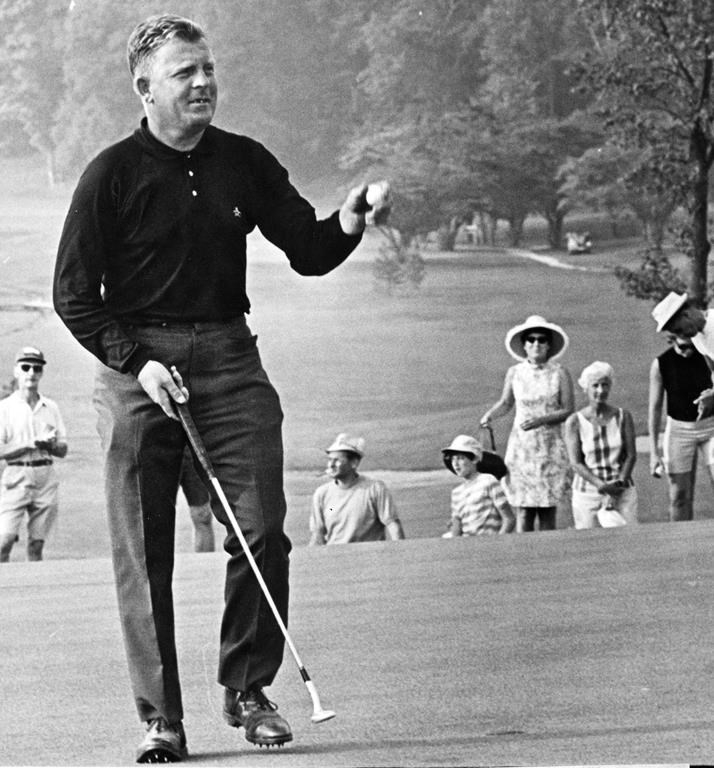 Veteran golfer Moe Norman of Gilford, Ontario, walks off the 18th green at Board of Trade Country Club at Woodridge, near Toronto, on Sept. 15, 1968. File photo by The Canadian Press
Previous story

When it comes to winning over Canadian golfers, it helps to know someone.

Ed Byman has that covered.

Try this on for bona fides: Byman — a former PGA Tour player and veteran of the Canadian Tour, now known as PGA Tour Canada, and champion of the 1975 Manitoba Open — once spent several months travelling the country with another journeyman pro: the legendary Moe Norman.

"What an unbelievable experience, watching this guy every day hit balls. You've heard all the stories, but my God, when you're seeing it every day it's like, 'Can it really be done this well?'" Byman recalled.

Norman, of course, was the famously accurate and notoriously unconventional ball-striking prodigy from Kitchener, Ont., whose true status as an icon of the Canadian game only really flourished after his death in 2004 at the age of 75.

"He was a very different guy, but just had such a love of the game, and that's what sort of bonded us," said Byman, now CEO of Global Value Commerce, the parent company of used-gear retailer GlobalGolf.com and its newly launched Canadian counterpart: GlobalGolf.ca.

"We really enjoyed playing together and practising together; that was part of the thrill. It was an unbelievable experience that I'll always cherish."

GVC, founded in 2001, had total sales last year of $59 million, a 15 per cent increase over the previous year. It employs more than 130 people and shipped more than 620 tons of equipment last year to more than 100 countries from distribution centres in North Carolina, Salt Lake City — and now Mississauga, Ont.

Canada's retail landscape, of course, is littered with the remnants of U.S. operations that sought a foothold north of the border, only to discover the hard way that they didn't know enough about their would-be customer base as they should have.

There again, Byman has done his research — much of it while plying Canada's fairways and highways as a professional golfer in the 1970s. For starters, he says, Canadians are among the most avid golfers in the world, despite the fact that the season for most is only six months long.

"I sort of intuitively knew that from my past experience, but once we dug into the numbers — I mean, you guys play a heck of a lot of golf, more than they do here, probably, per capita," said Byman, who is based in Raleigh, N.C.

"I think there's really an open road ahead of us up there."

According to GVC's own research, Canada is the fifth-largest market for golf equipment in the world, accounting for 4.6 per cent of sales worldwide, behind the U.S., Japan, Korea and the United Kingdom. It's home to 5.5 million golfers and 3,000 professionals registered with the PGA of Canada.

Indeed, hardcore golfers in Canada might be as enthusiastic about getting their hands on new gear as they are about playing the game itself. Thing is, factor in the U.S. dollar, customs and shipping charges and you might be better off with the plane ticket.

Byman is out to change all that — especially for one market segment in Canada that has been woefully underserved for years: left-handers.

It's widely acknowledged that Canada has the highest proportion of left-handed golfers in the world, although the specific proportion is hard to pin down: the Professional Golfers' Association pegged it at seven per cent in 2010, and some anecdotal numbers run as high as 30 per cent.

The prevailing wisdom attributes it to hockey: as kids, budding hockey players use their dominant right hands on the top of the stick for control, and later choose to stay with that setup when they take up golf because they find it more comfortable.

Left-handed hockey sticks, however, have long been easy to find. Not so left-handed golf clubs.

"In Canada, there's a heck of a lot of left-handed golfers," said Byman, citing a percentage of sales north of the border that's about twice the 15 per cent of U.S. customers who purchase left-handed gear.

Depending on the province, GVC's research estimates the percentage of left-handed golfers in Canada to be as high as 25 per cent.

"One of the things that we discovered, as we support these trade-in programs and consumer trial programs with the manufacturers, is that we get back a lot of left-handed products."

That means a Canadian retail outlet like GlobalGolf.ca boosts left-handed inventory in the golf marketplace in two distinct ways: not only does it create more inventory for customers, manufacturers are more likely to offer up more opportunities to try new equipment, because they know they have a place where they can sell off those clubs at the end of the season.

"That plays into a sweet spot that we have; we think we can offer a great selection and of course pricing in the pre-owned category," Byman said.

And yet what of all the talk of golf being in a state of contraction? Overblown, said Byman.

"We did go through a contraction but if you look at the last few years, the last 2-3 years, rounds of golf have stabilized and even showed a little bit of an uptick," he said.

"The game is really, I think, in pretty good shape."