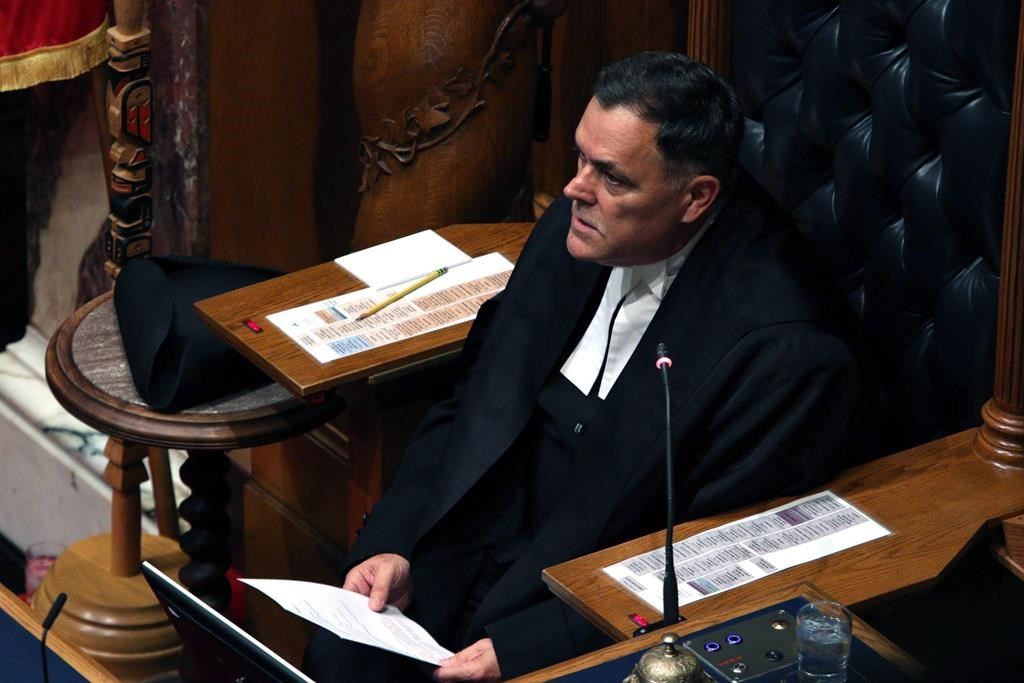 Speaker of the legislature Darryl Plecas delivers remarks before the speech from the throne in the legislative assembly in Victoria, B.C., on Friday, September 8, 2017. File photo by The Canadian Press/Chad Hipolito
Previous story
Next story

British Columbia's Liberal party has kicked out one of its caucus members for taking the role of Speaker in the NDP minority government.

Darryl Plecas, MLA for Abbotsford South, took the Speaker position Friday to the surprise of his party.

By taking the role, Plecas gave the New Democrats more breathing room in the legislature where they hold a razor-thin minority, with a one-seat majority with the support of Green party member votes.

Liberal party president Sharon White said Plecas had broken his trust with constituents and the party by taking the position after having repeatedly promised that he would not do so.

"None of us are happy about these events," White said in the news release Saturday. "As BC Liberals, we pride ourselves on working hard together, sticking together when times get tough, and having respectful debates within a strong, united party."

The party said the Abbotsford South riding association requested to revoke Plecas's membership to the party hours after he was acclaimed. The executive approved the request Saturday.

White said revoking his party membership was "the strongest action available to us."

Plecas was first elected to the B.C. legislature in 2013.

Interim Liberal Leader Rich Coleman said Friday that Plecas betrayed his own party and effectively joined the NDP by accepting the Speaker's post.

"The caucus had agreed and everyone had committed, including Mr. Plecas, to not run for Speaker, so to change your mind and not inform me when you change your mind until after the fact, I would still think that's a betrayal," Coleman said.

"I'm very pleased not just for the stability it brings to this legislative session, but for the symbol it sends to British Columbians that New Democrats, Greens and a Liberal have demonstrated that we can work together on the things that matter to people," he said following the speech from the throne Friday.

Green leader Andrew Weaver said the Liberals reacted poorly to Plecas's decision when they should have congratulated him on stepping forward.

"I thought the Liberals did themselves a lot of damage in the public eye today based on their almost, 'pick up my baseball bat and go home kind of approach,'" he said.

PM says no to decriminalizing drugs while B.C. addictions minister open to idea