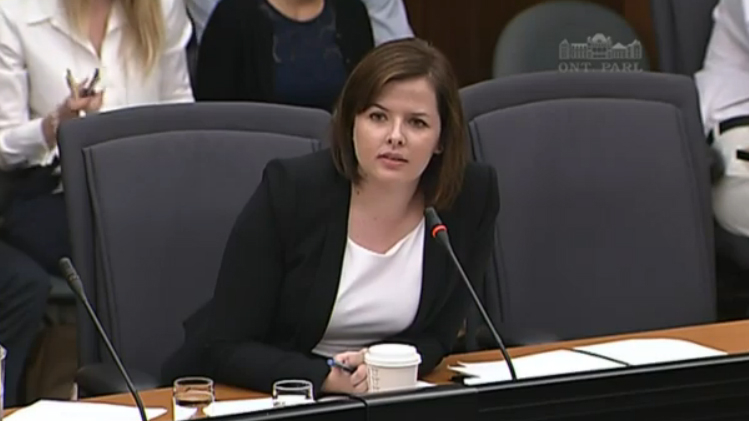 Former Ontario and BC Liberal political aide Laura Miller speaks to a parliamentary committee at Queens Park in Ontario on Aug. 6, 2013. Screenshot from Queens Park video
Previous story
Next story

A long-awaited and politically sensitive criminal trial involving allegations of document destruction in the Ontario premier's office is finally set to start Monday with the defence expected to ask for an adjournment.

A lawyer for one of former premier Dalton McGuinty's two top aides — each charged with breach of trust, mischief and unlawful use of a computer — says the request stems from information the prosecution only gave the defence recently.

"My client wants to get on with the trial," said lawyer Brian Gover, who represents David Livingston, McGuinty's former chief of staff. "But we need to ensure that we are prepared as well."

Police charged Livingston and his deputy, Laura Miller, in December 2015 in connection with the deletion of emails about the Liberals' decision to cancel two gas plants just before the 2011 provincial election. Although McGuinty and his Liberals eked out re-election, the decision sparked a political firestorm in light of the estimated $1.1 billion the cancellation cost taxpayers.

According to court documents, Livingston and Miller hired her partner, a computer expert under contract to the Liberals, to wipe clean about 20 hard drives in the premier's office in 2013. Both have steadfastly denied any wrongdoing.

"We have maintained from the outset that these are baseless allegations," Gover said.

The Liberals initially refused to give a legislature committee documents related to the cancelled gas plants in Oakville and Mississauga, sparking a contempt debate that eventually saw McGuinty resign as premier under a cloud in October 2012. He was never the target of the investigation and is reported to have co-operated with the police probe.

However, he has stood by the cancellation decision, although he expressed regret at the steep cost.

The trial, slated to last six weeks, comes ahead of a provincial election — set to take place on June 7, 2018 — in which his successor, Premier Kathleen Wynne, faces a tough battle to stay in office.

Wynne has repeatedly apologized for the gas-plants scandal that has provided reams of fodder for a gleeful opposition, which has blasted the cancellations as a costly "Liberal seat-saver campaign."

Monday's motion for a week-long adjournment is related among other things to an amended expert report from the prosecution. The defence is pondering whether it needs to retain its own expert given the information was only disclosed a few weeks ago.

"There's a dispute whether the Crown needs to disclose additional information to us," Gover said.

About 20 witnesses are expected to testify at the Ontario court trial, which is currently scheduled to wrap up in November and expected to be highly technical in parts. To avoid any conflicts of interest, the trial in Ontario court is being prosecuted by federal rather than provincial Crown lawyers.

Miller has raised close to $80,000 for her defence through a crowdsourcing website. McGuinty's former deputy chief of staff, who went to work with the British Columbia Liberal party, previously complained that police investigators were biased against her.

Her lawyer, Scott Hutchison, did not respond to a request for comment.