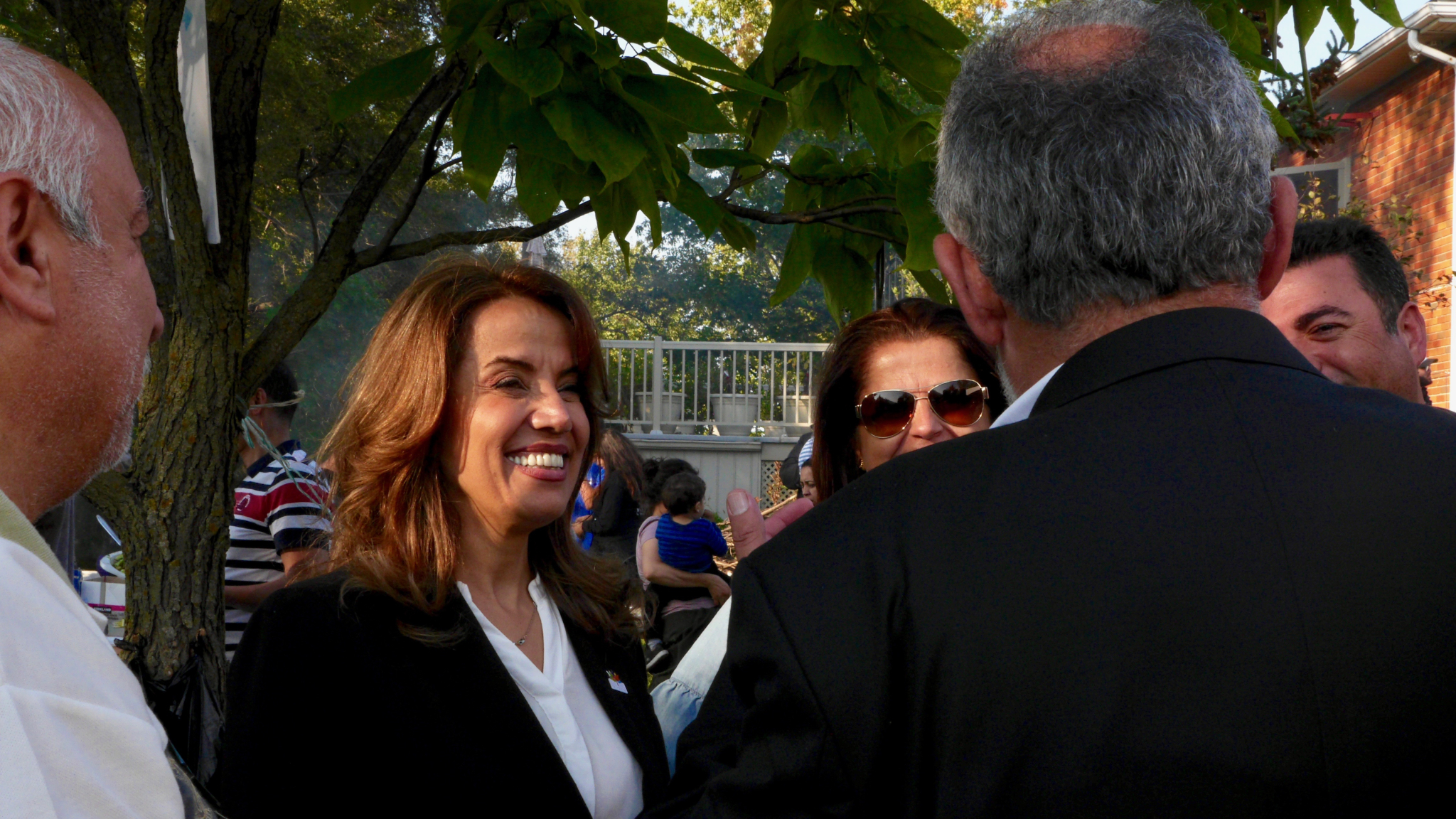 Quebec Liberal MP Eva Nassif laughs with Imam Hassan Guillet (facing away from the camera) at his Eid-al-Adha party in Saint-Rémi on Sept. 10, 2017. Photo by Clothilde Goujard
Previous story
Next story

For some who have spoken with National Observer, the wounds of a deadly mosque shooting in January have yet to heal.

Just last month, someone lit the car of Mohamed Libidi — president of the Quebec City mosque where six worshippers were shot during a terrorist attack — on fire. Feces have been flung at the mosque's door since that January massacre, and in June, a gift-wrapped pig's head was left at its steps during the holy month of Ramadan.

Despite these acts of hatred and vandalism, hope conquered fear and sadness in local celebrations of Eid al-Adha, the Muslim Feast of Sacrifices. In an orchard belonging to Montreal-area Imam Hassan Guillet, where more than 500 people gathered on Sunday, the theme of the party was unity.

“Our enemy is ignorance,” Guillet told a cheering crowd of Muslim and non-Muslims families from the greater region of Montreal, at the party in Saint-Rémi. “We are going to make the wall of ignorance fall. I hope that a party like this one can make walls fall down."

Guillet, who leads a mosque in Saint-Jean-sur-Richelieu, is well-known in the region for his eulogy for some of the victims of January's Quebec City mosque attack. During his speech, which went viral on social media, he denounced the "poisonous words" that he believes permeate discourse about Quebec's Muslim community. He called unwaveringly for "a real society, united" in sorrow, pain, hopes and dreams.

Eid al-Adha is one of the most important Muslim celebrations commemorating an event common to all Muslims, Jews and Christians of the world. It honours the willingness of Abraham, a Muslim prophet, to sacrifice his son in an act of obedience to God, who then offered Abraham a goat to sacrifice in place of his child.

Guillet has been hosting his Eid-al-Adha party for the last eight years, but said in an interview that this year was a very special gathering because of who attended: Muslims from the entire Montreal area, eight MPs from surrounding ridings, two Quebec MNAs, including a special representative sent by Premier Philippe Couillard, three mayors, two members of the Catholic Church, and leaders of several interfaith and cultural associations.

Ignorance is the enemy, says Imam

Despite the day's theme of unity — and visible smiles around the orchard — January's brutal terror attack was front of mind for many. In his own speech to the crowd, Richard Merlini, Liberal MNA and a special envoy for Couillard, noted a rise in hate crimes and the emboldening of extreme-right groups in Quebec.

“The terrible event which marked Quebec last January created a huge commotion,” he said. “Hostile attitudes and hate speech by individuals and endorsed by some radical groups and exploited by some politicians for electoral ends are downright unacceptable.”

The crowd applauded and cheered. Several people even shouted a loud, "Bravo!"

Halfway into the speeches, Zakia Zoukri, a Muslim woman from Quebec City took Guillet aside and offered him a t-shirt she’d made. The garment read, “Terrorism has no race, but it leaves traces,” a reminder of the traumatic experience of the shootings at the mosque. Guillet thanked her and wore it over his shirt.

“We are prisoner of our experience when you see the t-shirt I’m wearing,” he told National Observer, “After what’s happened in Quebec City, we realize we have work to do and the best way to shatter the walls of hatred and intolerance is getting to know each other better. This (party) is my way of responding to the events.”

Throughout the afternoon, hundreds of children played together, enjoying everything from henna tattoos to face paint and bouncy castles. The sight made Guillet happy — their joy it was one of his objectives for this gathering.

“I want them to know our religion in a festive atmosphere, and that they know that Muslims and non-Muslims are all brothers so (they can say), 'I, at the Adha party, I played with Muslim and also non-Muslims kids,'” he told the crowd.

Nabila Sabih and Asma Al Shawarghi, both mothers to four children, were delighted by the event. They got to know Guillet after the terror attack and identified with his “good and clear” message of unity.

“What happened [in January] was hard but not just for Muslims," said Sabih in an interview. "It touched people as humans and not as Muslims. We’ve lived through something really hard but honestly and personally, when I saw the society’s and politicians reaction in general, we were reassured."

She said she isn't too worried about a rising climate of Islamophobia in Quebec.

“In any event, wherever it happens in the world, there’s always good and bad things (that come out of it)," she explained. "We can find people like we’re seeing now, we hear about La Meute (an extreme right group in Quebec), and demonstrations everywhere. But we need to be clear, we are not here to impose our religion on others, we’re here to live freely.”

On the weekend of the party, the Parti Québécois adopted a resolution committing a future PQ government to banning religious symbols among civil servants, including Islamic coverings like the hijab. The proposal is highly controversial, and has been defeated by legislators before.

Following the PQ's latest proposal, however, Sabih saw reactions on social media condemning the proposal that reassured her. As a former teacher who’s studying for a master’s degree, she said she doesn't understand why the PQ wants to ban religious garments.

“That I’m veiled or not, it doesn’t affect what’s in my head, my spirit, and my competences,” she said.

Her friend, Al Shawarghi, was also pleased with Sunday's festivities — ​particularly the attendance from politicians.

“I really appreciate that they accepted the invitation to come, celebrate and they actually spent a good time here," she said. "Normally, politicians come, do their speech and leave but today, no, they sat and they were having fun and speaking to the community and it’s really important that we mix and understand each other.”

Eva Nassif, Liberal MP for the riding of Vimy in Laval, 50 kilometres north of Saint-Rémi, agreed.

“It’s very important that we’re always together as Canadians, that we don’t sow fear but understanding and openness to each other,” she told National Observer.